I don’t want to be disrespectful, but I’m really disappointed. This patch added almost nothing, and although fixed the bugs created last month, it created new ones. Games disconnects a lot, game freezes (actually, you “just” can control any of your units), pathfindeng still sucks.

This is unacceptable after 7 months. I begin to believe that the devs do not test the patches before releasing them. Or maybe they are underfounded, and Microsoft needs to hire more people. IDK. I just know aoe2 is getting slowly killed

Next month’s patch fixes eeeeeeverything, I promise. I have seen it… Just wait another month, PLEASE be patient. I am 100% SURE that Microsoft knows what they are doing. Have a little faith. They are investing TONS of $$$$$$ and LOADS of effort in AoE2DE. If not coming month’s patch then maybe the month after. Or thereafter. Or thereafter. Or maybe thereafter. Or… the next one thereafter. But it will come, eventtttualllyyyyyyyyyy. Rest assured it all will be fixed. SOON. They’ve got your back (and your $$) my friend. You can trust them. Totally confident multiplayer is going to be fixed.

You can go back to sleep now. You need not worry. All will be well!

Besides some disconnects the game was running quite ok for me until yesterday`s patch.
Since then it is not acceptable anymore… 1 out of 5 multiplayer games actually are launched. With the rest it is freezing during the launching timer or during the loading screen…
Anybody else made the same experience? Is there a way to Play without this patch again?

If it ain’t broke, change it. 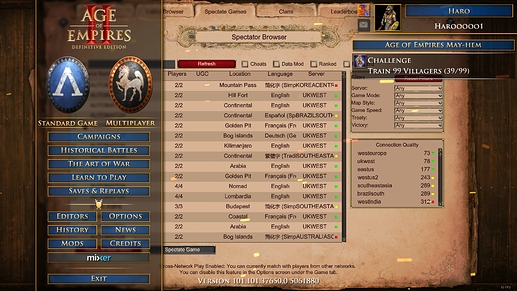 Lol what have they done that screenshot is just sad.

100 per cent agreed. This is just embarrasing

That was the occasional case in older patches.

Not something that this patch caused.

How are you seeing “Train 99 Villagers” already? For me, that challenge is locked.

Oh… is this one of those weird, “You can only do one challenge per day” things? If so, it’s pretty confusing.

Campaigns appear to work properly, so I suggest people to play them while waiting for multiplayer fixes

It’s the third time my game crashes today. And now it lags even when I play single player!!!

I logged into the game today for the first time in 2 months. Figured I’d give it a try… I tried typing in a few messages for chat and the whole sentences were ***** out again. Now they claimed this profanity filter was cleaned up a bit, but it clearly ***** out everything you say once again. And I’m logged out of Microsoft Xbox live too. I then ended up exiting out and went back to playing Elder Scrolls Online. Microsoft = politically correct garbage.

Are you serious?
Did you enjoy the amount of hackers from the last patch?

You are a new one…

At this point I think a lot of people would rather risk playing vs a hacker than not play at all. Also, they did absolutely nothing to stop hackers, they only fixed the 256 tech bug.

Agreed. It is better actually playing the game with hackers than not playing at all

And they did nothing to stop the hacking. Just read the description of the new update. NOTHING.

Which prevented them from using the exploit.

Microsoft is screwing up AOE like Disney did with Star wars

I’m not getting many crashes, so idk.
But what are your specs?

Perhaps you weren’t aware, but there is a guy making hacks which practically remove the fog of war, shows enemy units, relics, wolves, mangonel shots (before they land), resources on the map, and resources and population of each player. They’re free and easily available to download, and apparently last patch he updated it live on stream to make it compatible in under an hour.

So yeah… they fixed the bug they introduced the patch before, but did nothing to stop the hacks.

Will he get to the top of the ladder before Microsoft bans him? The race is on