Not sure if I would call this a bug per-say but it is still a large issue that needs some resolution. But I’m not holding my breath as not even the music bug has been fixed.

Ok, so with the game now being released on Steam I felt that this would be a good time to talk about unit path finding. Now the actual literal path finding is actually quite good overall. When you tell a unit to go somewhere they manage to find their way there with relative ease. However, the real issue comes down to unit collision issues.

I’ve found while playing that units have this tendency to not like being very close to each other. By that I mean they seem to prefer to be one full unit selection box apart. I’m really not sure why this is but you will have large gaps between units and if you tell a unit to move through the group or even stand in a gap they try to go around the group and this can cause some serious issues.

This is even more an issue when it comes to Villagers and gathering. This prevents you from gathering any spot with more than just a few villagers, and is just very annoying.

I’ve also noticed that units have this tendency to stay the same distance apart from each other when moving. So basically if you have a group selected and one, or a few, units are a bit away from the rest they move parallel to each other. Essentially they move the same way but instead of moving TO the point you click they just move adjacent to it as though they were in the group.

So what I would like to see is units being able to move MUCH closer to each other, which I think would fix pretty much every unit pathing issue we still have. Villagers also need this reduction but it would be nice for them to have even less while gathering. It doesn’t need to be removed like you would see in SC2, but a further reduction would likely help.

To add to this:
Vil that go build a building and get conversion on their ■■■ glitch out and do not get converted.

@ MS: This game is not tested properly. I feel it’s very sloppy and tbh it feels like a slap in the face of the community. These types of bugs are not the types that should be found by the community. Hire some devs and an extra tester. AOE has a bright future IF it gets support from MS. Look at Blizzard for inspiration on how to deliver a new game.

True. AOE is the best rts ever made. Just never had a support as good as Blizzard.

It looks like the hitbox of buildings and resources sometimes makes the game misunderstood where the player is clicking on, if in the building or resource, or in the ground.
As exemplified on this screenshot, I was trying to move my priests to the local pointed by the cursor (the green triangle I placed, as the cursor was removed when the shot was taken), but the game was interpreting my command as if I where ordering them to convert the academy right below.
This happens constantly, making it difficult to give precise moving orders to the units during a battle.
It also happens with villagers, when the player tries to move them to a point in the map close to a resource or building place.

Try to move military units or priests to a spot with enemy buildings to close from each other, without the intention to attack or convert any of them, or to move a villager to a place close to a resource or building place.

Thank you for the note! I’ve passed this information along to the team to see if any adjustments are in order! I appreciate the detail and information you provided.

Another example of this issue happening (build 46777). Below we can see some hoplites, where only one started attacking the enemy base, while the other three had to turn around and look for a new way to get to the buildings: 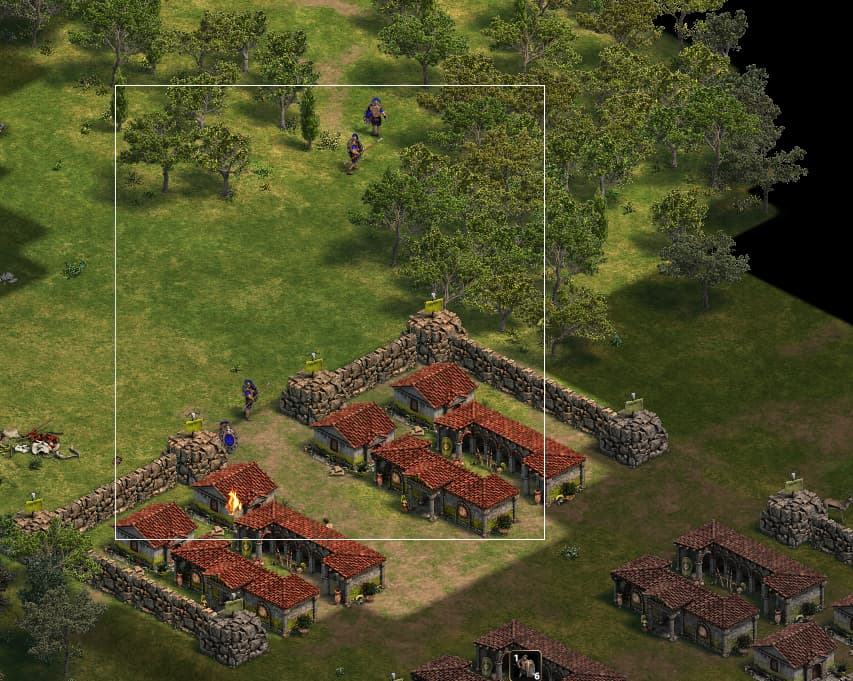 AoEDE_s 2022-01-01 13-58-37-003853×681 110 KB
It would be nice to have an update addressing this bug by decreasing the hitbox size of units, so they fit in spaces that are visually realistic.
While this bug shows how wrong hitboxes/unit sizes are on land, it sadly affects ships as well. I suggest/request reducing the collision size of units both in land and water where appropriate.
SlenderBadger98 September 24, 2020, 7:24am #7

We know how messy it can be to move units from place to place in this game, specially in large groups with different unit types. The problem with units having big collision boxes is that they deny fluid movements and quick turns, and, at times even causing units to get permanelty stuck.

My suggestion is to reduce collision size within units, similarly to how it was done in Age of Empires 2: Definitive Edition: 300 GENGHIS KHAN vs INFINITE CHAMPIONS | AoE II: Definitive Edition - YouTube
The only downside (depending on which units would be affected) might be of graphical nature, making pathfinding and overall unit management a lot better, at the cost of visual fidelity.

In past builds, the game had a collision system that, while looking bad, it helped units move easier in groups. That behavior can be improved to achieve better results, both visually and in a practical way.

Units clipping into each other isn’t a good thing, but having collision size decreased by 25% would already make for a better pathing compared to the one in current build (38862).

The size of the collision box soesn’t matter for stuck unit behaviour as long as it’s handled in the same way as it currently is they will keep getting stuck.
There needs to be a way to push stuck units off of each other, similar to how they currently get free when placing a foundation under them.

And make sure it doesn’t allow wall jumping!

I am not sure but perhaps if you replace square hitbox with round one it will make things better. In AoE2 hitboxes look like round.

Smaller collision boxes may make unit movement more fluid but it will cause tons of visual artefacts. Like swordsmen fighting an elephant with its head in the elephant’s neck.

The size of the collision box soesn’t matter for stuck unit behaviour as long as it’s handled in the same way as it currently is they will keep getting stuck.

Theoretically speaking, if collision size is smaller, then likelyhood of units colliding with each other would decrease. The bug with units getting stuck is a more serious one, which I do not know for certain if it’s related to collision size or not.

Smaller collision boxes may make unit movement more fluid but it will cause tons of visual artefacts. Like swordsmen fighting an elephant with its head in the elephant’s neck.

Theoretically speaking, if collision size is smaller, then likelyhood of units colliding with each other would decrease. The bug with units getting stuck is a more serious one, which I do not know for certain if it’s related to collision size or not.

You can create a mod to test it, but it wouldn’t work probably. I created many mods for AOM to test things and also fixed many bugs on my own, it is worth it.

By reducing collision sizes, then range would need to be increased accordingly.

As for modding, I only know how to mod texts. But anyway, the idea is that developers fix the game, not modders.

My suggestion is to reduce collision size within units, similarly to how it was done in Age of Empires 2: Definitive Edition

Can you provide a link for the AOE2 patch notes, which contains these collision size reductions? As far as I know they decreased only the collision size of Trade Cart in an AOE2 HD patch.

I was not talking about a particular update but comparing the first game with its sequel in regards of unit pathfinding and collision boxes.

Ships get stuck between shores (and docks also) when there is plenty of visual space for them to cross through.

That ships have a collision size relative to their dimensions, rather than having an excessively large collision for their size.

There isn’t enough space there for large ships to pass through. The building footprint is larger than the dock model. If you select the buildings you will see that the layout doesn’t allow the ships to sail.

For preventing things like this, the grid mod can be quite useful.

It is best to set a waypoint for the port so that this does not happen.

the hitbox of the ships is larger, unfortunately than the path they might take