Placement at the end of the season

I know it’s already mentioned sometimes in the forum, on reddit, or via content creator.
The way the ranked season works in the current state can not be the way to go.
Now, where everybody is hyped for the ranked season 1, and the players are comming back after the last really good patches, it would be another “killer” (people quit ranked mode, because of fear losing their rank) to the game. I think it would be better, if you count the highest achieved rank instead of the rank at the end of the season.

I’m not the kind of “whinerguy” and i really like and love this community. You did a really good job the last few months, keep it on, and change it with a server sided patch. Please!

I agree 100%. Ranked should always be the highest achieved rank during a season.

Give examples of games that do that.

In most games with a ranked mode I’ve played, this is solved by rank decay (while inactive).

It’s very common to finish with the rank you end up at, and not your highest rank at whatever point in the season.

Give examples of games that do that.

How it works in Rocket League is each 10 games you win at a rank lock in your season rewards to that rank. So your first 10 ranked wins count as being in bronze, and get you bronze rewards. After that you have to be silver or higher to advance your rewards, and after another 10 wins in silver or higher you have silver rewards. That continues until you’ve locked in 10 wins at your highest rank, and after that, you won’t lose those rewards if you fall back to a lower rank.

well, it is partly true, but I have analyzed the points for each rank and they decrease, that is, to go up to silver you must accumulate 600 points, but to go up to platinum or diamond you must accumulate less than 200 points taking into account that each game they give you 13 to 19 points. There is an incentive for having reached each league, as shown in the image, which you can show on your profile 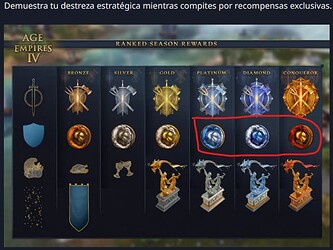 In compay of heroes II it’s like that, if you don’t play for so many days ,one month,your rating is reset, since it’s also from Relic, maybe it’s like that,
@ imperio salvaje566 if you please, a developer ratifies it for us

edit: u are showed on leaderboard for 30 days since your last game

If people are given the rewards based on the rank at season end; its only natural they will try preserve their best rank by doing the bare minimum to keep it.

Obviously, one solution is to give rewards at the end of the season based on the highest rank earned during the season or remove the rewards… Keeps people playing to try push themselves further.

This is really important. You should be given a reward from your highest bracked achieved. Now i got to my rank and dont want to lose it… so i will stop playing ranked.

Yes the highest rank achieved during a season should matter for a reward. Not the rank you have at the end of a season.

I think something like this is a much smarter way to do ranked. Doing so, people have the feeling to really earned the next rank’s reward, not just “got it by luck winning a couple placement matches”.
Being in gold I seems to be top 22% of the player base according to aoe4world. The next rank is top 5%. I think it’s fair to assess that an average skill player has no motivation to play any single game after reaching gold I due to the risk of loosing.
Creating alternative / smurf accounts (if it can be named like that on that level

), seems to be too much struggle to me. I rather just play quick matches now, and to be honest, I didn’t notice a single difference between those game modes, except the display of the rank. (Ok, maybe other map pool, but somehow the random algorithm always spits out the same 3-4 maps to me, don’t know why.)

I worked pretty hard to reach gold and don’t want to drop to silver last day and not get gold rewards… I don’t care about cosmetics too much but it will be a huge spit in the face to only get silver stuff.

Please change this in Season 2 devs

Ranked rewards must be changed… Otherwise players will hit their desired rank and stop, not healthy for the playerbase. I wish I was mentally stronger not to care but the fomo is strong.

Both of the above options encourage the player to keep on playing and see how high they can get. Aoe4 doesn’t at the moment.

Ok with new rank point system I don’t think this is a big issue now.

Before you got punished for playing a lot unless you had 55% winrate or so, now even slightly below 50% you should be able to climb. No need to be scared of losing a few games and having desired rank out of reach. Nice change to incentivise more gaming.

My feedback now is to increase the amount of points required for each rank, no fun reaching your ceiling super early in the season, and add a new rank above conqueror. The top 0.5% are really way better than the rest, seems weird to me to lump top pros with people who aren’t nearly as good.

What? You lose your rank if you stop playing ? Wtf is this? So If I play for 1 month, then because of my job or studies I need to stop playing some time and if I return I will lose my rank? I remember that was one of the reasons I stopped playing SC 2, in company of heroes I never lose my rank/level even if stop playing for some time… If you earn something, you shouldn’t lose it because of inactivity… st the end you already paid for the game… the only way is to play and lose…

add a new rank above conqueror. The top 0.5% are really way better than the rest, seems weird to me to lump top pros with people who aren’t nearly as good

This isn’t a simple issue. I know of another game that added a new super elite rank above what used to be the highest rank, and some people now think it ruined the game at that level. Basically, there is some merit in the highest possible rank feeling achievable for a lot of people if they are prepared to practice for a long time. When you make the top rank really exclusive, it becomes a level that is impossible without extremely rare talent, hard work alone will no longer suffice for most people, and this can be demotivating for a lot of people. The very top players aren’t generally motivated by the super exclusive top rank anyway, because they get rewarded in other ways, e.g. by competing to win prestigious tournaments. So a super elite top rank doesn’t really help the motivation of the very best players, but does hurt the motivation of a much larger number of players who are hoping that 10k hours of practice will eventually get them to the highest rank.