I played the stresstest with some friends of mine for fun and overall we really liked the game!
Strangely enough the most requested feature was, while building walls, to connect to the walls already build by teammates.
On some maps (even giga) you spawn very close together when playing as teams of 4 or more.
Everyone wanted to build stone walls and began to curse the game and each other, when they realized they had to build wall beside wall, instead of building together. Yeah we could send one of us stone and let them build the entire thing, but that’s no fun

Please add the mechanic to connect to friendly (or even enemy/neutral) walls, to stop us bickering and complaining

Agreed, it was pretty frustrating and we had to wall our bases really weirdly.

A piece of wall belong to no one, unless some one clame it is his.

Buildings are neutral and do not have fealings.

Please alow us to connect wall whit other buildings/wall, that we do not own.

Never thought of that but that is a good point. Good QoL feature.

Who agree with me that the developer should allow allies to connect their walls?!! Its so frustrating when you can’t connect your wall to your allies. Also why can’t we see the scores of each team or what age each players is at? And why can’t we choose our colors?

Eh. I dunno. Seems unneeded in most cases, that being said-- I can’t imagine it would hurt the game if it were implemented.

If you play with allies, sometime walling is essential and its frustrating that you need to wall all around your own town because you can’t connect your wall to your allies wall. To me, it just makes no sense.

Also why can’t we see the scores

It was a concious decision to remove the score from live play to disallow players from inferring things. For example, AoE II players can determine the exact moment the other player clicks up to the next age by monitoring the score.

Seems unneeded in most cases

When 2 allies wall off their side of the map it becomes relevant.
It is ridiculous that you need to build towards a forest or cliff to somehow connect.

what age each players is at?

You can. Go to Settings and enable the option. 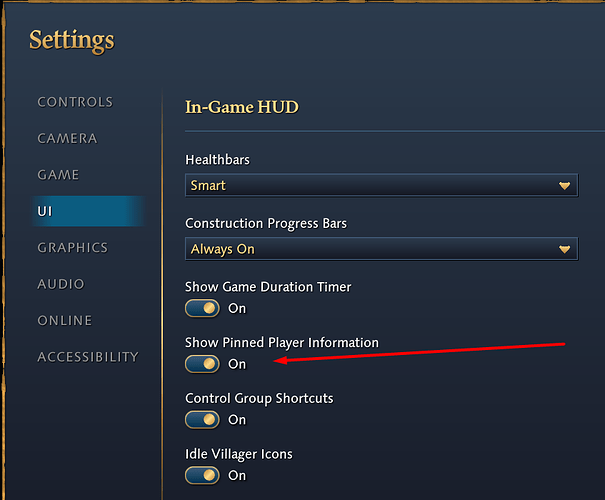 OMG totally agree with you!!! That’s how I feel too!

This seems like a no brainer. I’m not a programmer. But yeah. Obviously you should be able to use any friendly wall.

Right-- but the cost of walls are really cheap. So I don’t think it’s crazy or insane.

but the cost of walls are really cheap

While true, maps on 4v4 are huge.
Only one ally can wall off the map without using cliffs and forests, so that may take a while.

I guess this is twofold and focused on walls. I’m sure there are other allied co-building/repair/other opportunities.

Generally, I find walls too weak, especially against cannons. Yes, it is a special play style that not everyone uses. But a fortified build is still valuable. Perhaps a third tier of wall, heavy fortified or something that costs quite a lot to build/upgrade, specifically for late game turtle style. Requiring masses of damage to bust through.

There are probably other allied improvements not thought of yet, thoughts?

Hello, Age community and developers.
It is so frustrating that the game does not allow teammates to connect walls to each other’s walls.

yaaassss! i had forgotten about this!! Defnitely a MUST-ADD! there’s no way to connect walls or to make them adjacent to your allies’. How come??!

I agree. +1 for tying into allied walls.

Tbh, I have yet to come to a situation where I was upset I couldnt connect walls, but it is quite odd to not have that feature in the game, I have to assume some weird coding limitation that they need to spend time to make a workaround or something.

Hey developers of age of empires 4,

i have one question:

Why you can´t build stone walls with a team mate together? You can´t build the wall next to each other or in the same line. This actually doesn´t fit.

Can you fix this in a next update?