POLL: Is it time for new civs?

So, what do you guys think is it time to release new civs, or should devs focus on the state of the game ?

I think we need more QoL improvements and content for the base game. Last thing you want to do is to split people with DLC when your core playerbase is on a rope.

Like seriously, the entire UI is a mess. You have to be juggling around between 3 tabs to just set up a custom game when everything could be shown in a single window.

Also, the base game needs a serious discount offer to get more people in that could then be interested in investing into the DLC.

All of that, and that the base civs are not even well balanced yet, let alone adding more civs to the mess.

Civs should be asymmetrical, but also the most historically significant and content-rich. Only Roman Empire x Ottoman Empire can fix a big mistake and salvage this dire situation.

Personally im a spanish fan, but 100& agree, Byzantines and Ottomans are a must have. Still, we have issues like color picking ( sigh), which should have been in the game at start… At the same time, we have seen some game population going up, which i think is a move in a good direction !

Although I would love to see a new civilization appear in the game, there are too many other areas in the game that need to be improved first, and the current civilization balance is not yet done. I would rather developers improve the existing game to After a certain point, we will see them focus on the development and release of new DLC.

The game had peaks of 60 thousand, many left due to bugs, broken strategies and broken civilizations. I would prioritize advertising that the game is already complete and balanced. New civilizations are made when you have reached your peak of constant players, and then your priority is to keep them in the game.
If you consider that the game has already reached its peak (12 thousand) then do it, but I would like a higher peak just comparing it with aoe2, this one exceeds 18 thousand 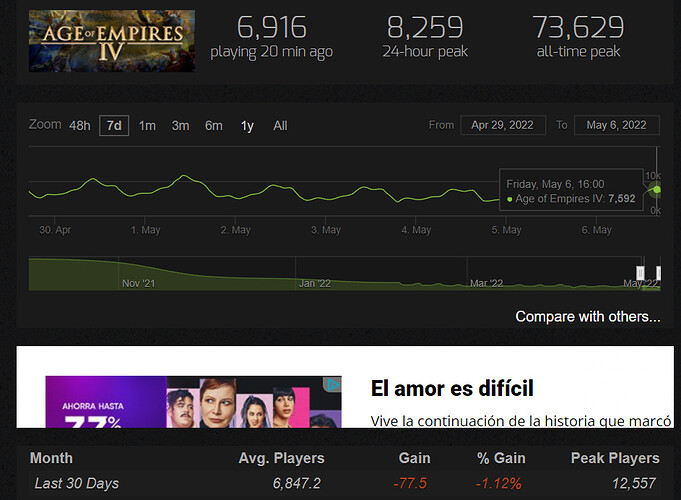 I mean, I believe they need to fix some of the old civ landmarks first but after that I’d love to see new civs announced in a couple months.

the game is dying so fast

Something tells me they will first put DLC’s for the remaining 4 civs before working on a new one.

we have to wait for the ranked games of cooperative games, it is what casual players are most interested in, it is still pending to adjust the size of the map, remove unwanted maps, and establish the cost of wonders according to the number of players.

Focusing on competitive 1v1 was a good move as casuals can learn the meta and build orders from the pros, speeding up the learning curve as well as casters promoting the game.

Game is dying quick! If they keep only tweaking the state of the game much longer, it will be officially dead, forever. It needs a major DLC now.

New civs and new content is really needed. The sooner the better. Besides the game should get all the features previous AOE games had.

Before releasing a dlc the base game should have a discount.

I guess at least a announcement is needed to keep interest in game.

i think spain should BE ON THE GAME ALREADY , Spain had the 4th largest empire of history how the heck is not even on the game yet!

These are the civs I’ve faced since Ranked started:

Every other match is English, and they always play the exact same, annoying rush. I’m just so sick of it… I don’t care if I win or lose anymore, I just want some variety! Literally makes me not want to play more than one game every few days.

not until they fix the game

Spain did have 4th largest empire of history indeed, but not in medival period

I would literally ■■■■ my pants seeing Spain civ trailer. Reconquista campaign from battle of Guadalete to fall of Grenada in 1492r… Now THAT would be something!