Preventing Onagers from cutting down trees

I’ve recently learned about three different methods to prevent Onagers/Siege Onagers from cutting through forests. These methods, all using triggers, are pretty simple, but I think this is something still worth sharing.

I actually made a custom scenario using this method: But what if you want Lumberjacks to chop through forests, but don’t feel like toggling invincibility on and off. Well…

Like with Dead Unit IDs, Blast Defense Levels can be edited with the Modify Attribute effect:

Here’s how your Modify Attribute should look like (I used dragon trees in this screenshot):

While Onagers can’t cut down these trees, Lumberjacks can still chop them, given that trees aren’t automatically respawning when they die (as seen in Method 1). You also might think that, as opposed to modifying Blast Defense Level, you can instead set the Onager’s Blast Attack Level to 2 with Modify Attribute. Unfortunately, I think the Blast Attack Level attribute may be hardcoded, so you’re probably stuck with modifying Blast Defense Level in the meantime.

Modify Attribute affects units regardless of location. But what if, for aesthetics purposes, you only want certain sections of your forest to be Onager cuttable?

Method 3: Remove Object
Projectiles, including Onager projectiles, are actually considered to be units, even though they’re unavailable under the unit tab. 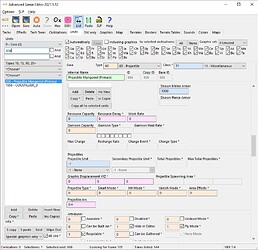 This is how your Remove Object effect should appear:

With this, you can now prevent Onagers from chopping trees in specific areas, as opposed to the whole map, while also preventing infinite Wood resources. I believe this is the same method used to prevent players from Onager cutting to the battlefield in the The Fruits of Her Labor scenario (DLC campaigns are encrypted, so I can’t view these scenarios in the editor). And yes, if you enable aegis in that scenario, Lumberjacks will eventually chop their way to the battlefield.

This method is not perfect, though. Assuming your area follows the tree line, Onagers will still be able to cut about 5 tiles deep into your forest. I think this has to deal with the fact even without a Timer condition, a looping trigger only activates once per second, leaving a second long gap where a projectile could still land. Therefore, make sure your forests are pretty big before using this method.