The latest patch notes yet again make a change to the native embassy and the dutch “problem” of having more buildings than free spaces in the UI. But this issue is a little bigger and it affects more than the dutch. As you can see in this bug report I made: Nizam Fusiliers bug with Battlefield Construction - Age of Empires III: DE / III - Report a Bug - Age of Empires Forum, having only 6 columns is detrimental to the game, specially if devs are planning to add more abilities to units and buildings, which I absolutely believe they should. But those changes shoulnd’t be held back by the Interface. Look at this example:

20210418120251_11920×1080 930 KB
You can clearly see we have a problem, because even if they move the formations, they would be in two columns and two rows, and using the grid hotkey it makes things a little harder, specially since all other units have their formations in one row and it helps with the keyboard, and even so having special abilities depending on their formation.

So I propose that the UI could add columns , up to 10 (from Q to P there are 10 keys), so units or formations could in the first row, techs in their on row, have space for abilities and allow dutch vills to have all their buildings. Kinda like this: 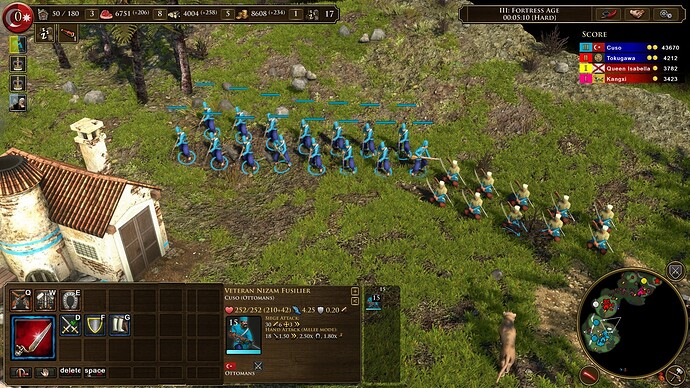 Those extra columns would only appear when they are needed, if not, UI stays as a grid of 6x3. With this, I think this specific issue with the UI can be solved, and it will open room for abilities or new uses for units and buildings.

Devs don’t know abc of game ui and don’t know why they should change current ui which works perfectly in their thought.