Proposal for a new civilization: The Aragonese

History:
The Kingdom of Aragon gave the name to the Crown of Aragon, created in 1150 with the dynastic union resulting from the marriage of the Princess of Aragon, Petronilla, and the Count of Barcelona, Ramon Berenguer IV. The King of Aragon also held the title of Count of Barcelona and ruled territories that consisted of not only the present administrative region of Aragon, but also Catalonia, and later the kingdoms of Majorca, Valencia, Sicily, Naples and Sardinia.

The Almogavares were shock, espionage and guerrilla troops present in all the Christian kingdoms of the Iberian Peninsula throughout the Reconquest, originating in the kingdom of Aragon, formed mainly by light infantry and especially known for the active role they played. 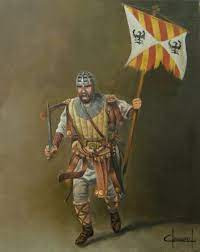 - Aragonese settlements :. When researched you will receive a villager every time you build a house.

Team bonus: Fish are visible to all members of the team.

I like the idea, the UU and UT, the bonuses not so mucho.

Unfortunally it’s not very likely se Will see them, we have too many euro civs… but, maybe I’m wrong

Make the castle age UT be about TCs spawning 10 vills or something like that, give them a fire ship discount and replace both infnatry bonus with cheaper barracks techs or free infantry armour or something, also replace the imperial UT with maybe extra melee and pierce armour on infantry, amke the UU just a high damage skirm with low pierce armour and no bonus against archers nor spears

I guess it will be fine with those changes but eh

I like your idea of making a full infantry European civ + UU, but this civ doesn’t feel right (Aragonese settlements is a huge no).I mean I like the concept behind your ideas, but some bonuses and techs are repeated from other civs.

Ships regenerating health is nice though. I hope we see it in a new future civ.

How are they different from spanish?

Tbh they arent any less different than Portuguese are compared to Spanish. I dont think adding Portugal was a psrticularly good choice but theres certainly a precedent

Are you talking about his bonuses or cultures

Cultural vise. Spanish covers all of the spanish kingdoms right.
This is what happens when they start adding kingdoms.

Well, technically, you do play as Castille, and A name change would be pretty easy ;). But they would have added the Crown of Aragon with the Sicilians if they did want them.

Why wasn’t a particularly good choice? Spanish barely represented Portuguese in game as they were.

no real eco bonus though means this civ is going to be mediocre at best.

Because Portuguese arent any more diferent to Spain than Galicians, Basques or Aragonese and we dont need 5 Spanish civs.

Portuguese got represented in the game due to their achievements in the Indian Ocean in the time period, not because of just being “different”. Besides, Spanish were never ment to represent Portuguese in game, because all of the AI player names were of Spanish kings and nobles and none of Portuguese kings. Add that to the fact that the voice are all in Castilian and their intention was obvious.

Representing Portuguese under Spanish would be losint one of the most powerful civs of the renaissance, yes. However, they are all gunpowder, monk and naval civs from Iberia at the end of the day and share a ton of history and culture.

I think it makes more sense to keep them togheter and also voices, logos and AI names arent good counterarguments when the civs are related and can be represented decently enough with the same tech tree and bonuses

How about UUs? The use of Conquistador is very rarelly, if at all used in Portuguese historiography. Also certain units like Paladins and the lack of crossbows don’t fit Portugal at all.

The lack of crossbows is stupid for both of them. Portugues from what ai heard still had decent cav as well

If the unit still fits the civ loosely I think its fine. We dont need to give Spain UU that is accurate for all the diferent kingdoms they represent (but the Jinete would have been better)

Portuguese couldn’t field nearly as much heavy cav as Castile. That is why most of the noblemen fought on foot in Aljubarrota.

This is a copy of Celts and Vikings.

You could do something else, like Infantry costs less 15% Food, and Ships get +1 Speed in Castle, +2 speed in Imperial Ages.

Portugues from what ai heard still had decent cav as well

Portugal is a barren strip of mountainous land planted by the sea, it never had the ability to feed and afford a large amount of horses.
Portuguese had a lot of Knightly Orders, but they mostly fought on foot.

Ships get +1 Speed in Castle, +2 speed in Imperial Ages.

you mean .1 and .2 speed right? 2.43 speed war galleys and 3.43 speed galleons sounds crazy strong. not to mention what it would do for fishing.