Hi everyone, I’m looking to buy a desktop during black friday weekend. The only game that I will run on it is aoe2 de, so I would like to buy something which will allow me to smoothly play ranked games, but not pay for anything more than that.

I have been browsing this forum for information, but I still have a few questions;

Thanks in advance for your advice!

the advice i would give you is don’t buy a prebuilt - you will almost always save money just buying the parts and putting them together.

Depends, if he never built a pc and is looking for something really cheap it might not be worth the hassle just to save a few cents…

But yes, I would also recommend a low core count high clock Intel CPU…
You could also have a look at the used market. The game is capped at 60fps. More power does not give you much benefits for AoE…
I have one PC with an old Intel core i5 3570 and it runs smooth at 4k.

1440p (and higher) lets you zoom out more. That gives you a makro advantage but everything becomes tiny which makes your mikro and quickwalling much harder.
Pro players like the Viper do not zoom out much!

a few cents? i’m sorry but you clearly haven’t been paying attention. these companies are upcharging 100 dollars minimum. and that is off base price of parts if you bought them individually, and brand name ones at that. you know these companies buy them in bulk, paying less, and you usually don’t know what some of your parts are going to be.

But system integrators like Maingear can definitely provide enough value add that I argue worth the premium. For prebuilt, its largely come down from where you buy it.

I am aware of that. Right now I am building an expansive gaming rig for myself and got almost all parts on sale from different retailers.

But it looks as he wants something cheap. Like a 500$ PC…
You might find super cheap offerings from different retailers right now, but then the shipping cost for each part becomes an important factor.

Oh ok. But I recommend this system integrator to OP based on their unrivalled sales experience and tech support capabilities.

I am not knowledgeable enough to recommend a full config for OP, but I will NOT recommend you cheap out on RAMs because 16GB RAM is the current bare minimum if you want to do anything else while playing AOE2, or reduce the usage of page file.

Don’t cheap out on power supply either. Pick one from reputable brands like Corsair. Always make sure there are enough wattage for power supply and enough current for 12V rails so GPU wont just stops working while ur game session becomes intensive.

AMD Zen 3 architecture CPU actually surpasses Intel in terms of single core performance across a wide range of tests. Plus a ton of cores, AMD should give you better value in the long run than whatever Intel offers right now. 14nm processing already shows its age for several years.

GPU wise, something like RTX2060 should be more than enough.

But I am too are curious if Age2 will perform good on Zen3 as I am planning to upgrade to a 5900X.

Sorry, I think we got a little off topic there:

Yes, the Intel core i3 10100 would probably be a great choice. The i5 will probably give you the same performance (again, the game is capped at 60fps…). But the i5 costs a little more without giving you any benefit so in you case you might want to stick with the i3.

In the past the game did run better on Intel but I (we) don’t know if that is still the case with Ryzen.

Go for 16gb of Ram. You don’t need any expansive fancy high clock Ram for Age 2. Just make sure to have 2x 8gb for dual channel operation (not a single stick of 16gb…).

Higher Resolutions are just a preference. The game looks a littler nicer with higher resolutions but that’s all. You can play at 1080p and zoom out and you will see plenty of the map…

CPU - as I just mentioned in the thread on performance, you can’t completely ignore GPU performance. You don’t need a monster GPU like a 3080, but with a decent CPU, a 1650 will become the bottleneck at 1440p. I’d suggest a minimum of 1660 Super, and with a top performing current CPU it might even need more than that to prevent the GPU being the bottleneck. Also, while some claim the game runs on one core, I have found this varies depending on unknown factors. I have seen the game using multiple cores. If I set the affinity before running Steam to limit the game to a single core, it runs terribly. Nonetheless, you may well be correct that a high clock speed 4 core CPU is better than a lower clock speed 6 core CPU. The turbo speed is probably more relevant than the base speed.

AMD vs Intel - there won’t be many people who can answer this. I can tell you my Ryzen 5 3600 PC scores considerably higher than my i7 6700T PC. It’s the difference between it always being smooth vs having visibly unsmooth animation even in heavy single player use. It will probably run better on the latest Intel CPUs that are >5GHz than the Ryzen 3x00 CPUs, but the Ryzen 5x00 CPUs might take the lead.

RAM - I just had a look and I’m seeing the game using 4GB during the benchmark with 6GB commit size. 8GB is in general tight for a gaming PC, but if you only want to play this game, it might just be adequate.

1440p gives a much nicer view of the map IMO, but some people are happy with what you can see at 1080p. You can get the 1440p map view on a 1080p screen using the method I described in this thread:

It’s claimed in an earlier post in this thread that the game is capped at 60fps - this is not true. Proof: 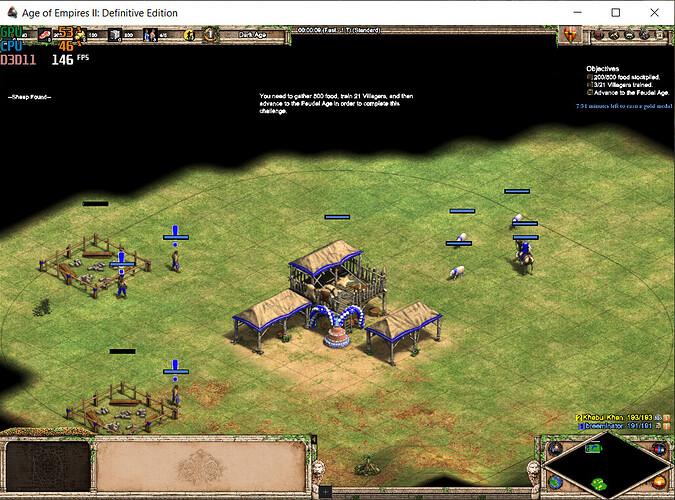 The game wasn’t limited to 60fps from the start but with some patch they put in a 60fps limit when you play ranked. There is no FPS limit if you play Singleplayer.
Honestly I am not sure if that cap is still in the game or if they removed it with another patch. It does not matter either way though. There are only animations for 60fps. If you run at 120fps you get each frame twice…

If you run at 120fps you get each frame twice…

You still get the lower latency, smoother mouse pointer movement, and smoother scrolling, though. You can really feel the extra snappiness when playing at higher fps.

I’m running the game on AMD Ryzen 7 and I’ve never had an issue. I also have 16gb of ram, which as someone above stated I would suggest not skimping on, ram is very important. 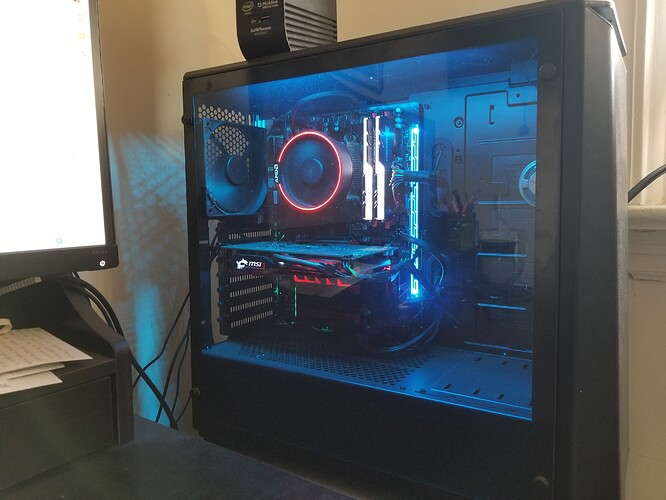 Are you sure? I switched from a 60hz to a 144hz Monitor a month ago and didn’t notice much of change in Age2:DE. However, I only played ranked and especially the multiplayer matches were kind of a lag fest since the new patch…

I haven’t played ranked for a while, so can’t comment on what that is like now. I don’t think I’ve ever seen a streamer who shows their fps on screen. For single player, though, I find it very noticeable, but it depends how sensitive you are to it. The PC I’m typing this on has 2 screens, one at 60hz and one at 165hz, and if I move the mouse pointer back and forth across both screens there’s a huge difference in the smoothness, the 60hz looks terrible by comparison. The fact that the animations only run at 60fps doesn’t reduce the smoothness of the other elements when running at higher fps in single player. If the game locks the refresh rate of the monitor to 60hz in ranked, no matter what refresh rate you have it set to in Windows, then that would reduce the smoothness of the other elements. I’d be surprised if it did that, though.