The UI is now showing resources carried by villagers.

Getting tired of all these little bones.

They don’t know how to sell the game unfortunately. They talk so much about small things or things that don’t matter to gamers, and they make long streams about nothing. It’s like watching politicians talk, not enthusiastic game developers. Would love to see them show off the game, no grand cinematics or editing, just talk about features of each civ. Their marketing is so bad.

The beta insiders played was already months old? Seems like they don’t know how to make a game either. Zero point getting feedback from something not even in use

I guess they were testing for stability and connectivity issues.

They were afraid of performance complaints, which is why they provided an old but stable build.

Depends entirely on what you want your feedback on.
This is very common practice and I would wager most players testing the game knew this.

We didn’t play the beta to see if it’s fun, but if certain things do or do not work. Nothing more.

They know what they are doing and I would bet that they only wanted to test the servers and matchmaking system to see how well it plays out and also look for additional feedback on balance issues and how the game overall feels and plays.

While they do that they keep working on their own with their testing and keep on building the game and thus you really don’t need to provide us with the latest build in this case. Then they take all of our feedback and compare it with the build they got and then take the action they want to do etc.

The beta insiders played was already months old? Seems like they don’t know how to make a game either. Zero point getting feedback from something not even in use

When you want to know if anything went wrong in the game, and so you recruit 100,000 people into the beta testing, with all the added risks that your game will be leaked, then it makes complete sense that you submit the most basic build you can do. Just to judge that everything is okay so far. So that even if people do leak it, and lots have, then it’s damage control. Yes it’s bad that it gets leaked, but at least majority of the features are hidden to still market off and surprise the fan base. If they wanted everyone to see the build as it is, they would have shown up to date gameplay footage which they have not so far. So best to wait and see what it turns out and be hopeful that they are taking in the feedback and criticisms spoken by millions on every popular platform as well as the beta forums.

You know, there is a reason they have to do that… if you watch the interview they explain it, and it makes perfect sense.

Comme to trebuchet therapy, and speak about you fealings.

You will be reborn has a new person, afther doing the activity.

Welcome to trebuchet therapy. Find a picture online of trebuchet and compare it to the trebuchet video. Say also what you learn of new.

This is just an excuse people use to downplay criticism. Nothing major is changing before release. I would be surprised if they even changed the zoom level.

The only point of these “closed betas” is for bug fixes and stability testing.

Well as playing Betas for multiple companies I found the opposite to be true, that is basically the game you will receive. Graphics and Textures are pretty much set in stone. The zoom level is fixable but then you run into rendering issues which could be seen in the offline tutorial campaign if you moved quckly through the map, but I’m sure that’s one thing they critically will fix or face poor sales. Also they only included the expanded 100k players the 2nd week with even more limited time. They were supposed to or are already running the 2nd closed beta with full civ availability.

The beta was limited to what they had available being the most stable version. Relic did a fantastic job on such a smooth performance both online and offline, but it wasn’t for fear of leaking content that will happen in all public betas its a fact of life. Damage Control is what they are doing now with these “session” updates after 5 years of silence. Look at Relic they opened up access to the public to play COH3 in pre-alpha state a year and half in advance, after comparing both games I canceled my AOEIV order.

Edit: after playing this round of open beta with limited Civs really not feeling this game, they need to change that damn TC bell. 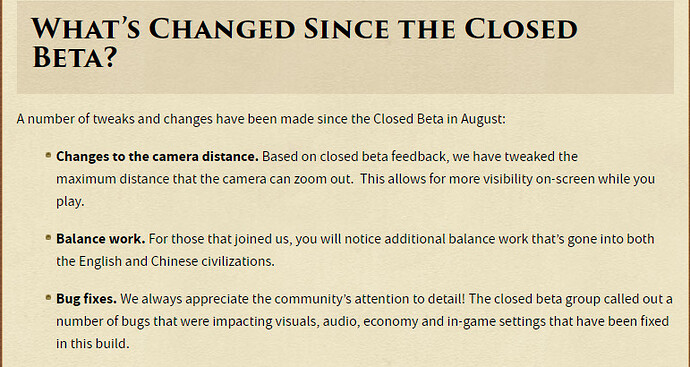