What do you think, will AoM:Retold be a Remaster, Remake or Reboot?

The same game as AoM but remade in a new Engine.
The name “Retold” hints to the game being more then just a Remaster.
Also the Atlantians and Chinese are missing in the trailer, which hints on them only remaking the base game first.

Basically an AoM2. The story gets told again but different.
This would be the most work of course.
It doesn’t seem likely because I think they would have called in AoM2.

Also the Atlantians and Chinese are missing in the trailer, which hints on them only remaking the base game first.

Just because they didnt show them in the trailer no means they are not included.

Them not being shown doesn’t mean they won’t be there, that’s true.
But if they will be there, why not show them?

That’s why I think it’s not unlikely that they are making a remake and not a remaster.

Not sure why so many people voted “Something Else”, I can’t really think of a 4th option.

Well you gave them the opportunity to vote for “something else”

i am personally currently on the same boat like you. Cause of reasons like focus, time, safety, future content options etc. I would really like to see a redone, good looking Atlanteans and especially Chinese, I really do. But I think working on the original 3 civs just makes the most sense for me at the moment at least cause:

First give the ppl something what they know and feel connected to, then look how they like it and big aswell as smaller changes, and if they do and handled it then try to role ads for new content and try to focus on that. And why not try to use the opportunity to make an old Addon to a big DLC since it was already additional content.

Time, resources, safety (and at best quality over quantity)

Btw you still sure none of your family members working at Microsoft in the gaming department? how unfortunate but acceptable and understandable.

Totally a remaster.
And it’s called “Retold” because there will be a story replayed again: The Arkantos campaign.
So I think that’s why they called it that way.

They already called ti the “Definitive Treatment for AoM” so this option seems very likely. But why did they call it Retold?

This is the answer. 20 characters

The name “Retold” hints to the game being more then just a Remaster.

This is more likely. Also, I think they will remade it in a new engine.
Remaster with new engine.
I can’t wait to see it!

But that’s a remake!

But in both cases the same game as the original

I imagine it as a mix of all three.

It will be on an improved version of the same engine, but it will be remade in ways that don’t just include graphical upgrades and balance changes. Rather it will include sweeping changes to gameplay and story that make it somewhat of a new game, hence the game will be “retold”.

Who confirmed it?
Do you have a Link or something? 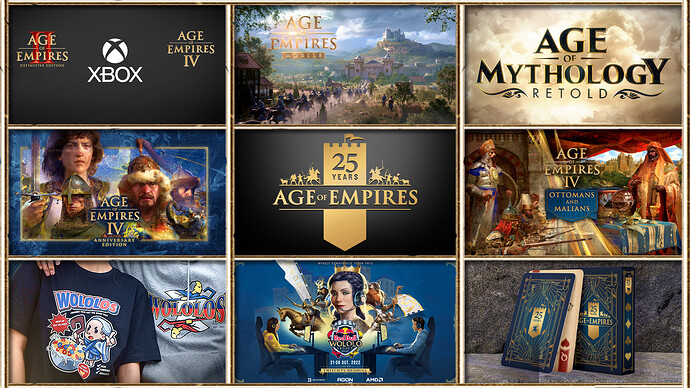 It's a great honor to work on Age of Empires, which is beloved by so many players all over the world. We know how much the games mean to you and we are so

Wait, Did You Say Myth?
Gods will return. Heroes will rise. Legends will battle. Age of Mythology Retold is in production! We know that the Age of Mythology community has been waiting hopefully for a Definitive Edition, and we’ll be delivering. We’re working hard to bring you the glory of the original game with updated graphics, features and more.