There was a team I played twice that ended up having a ridiculous couple games where they just steam rolled both my teams in the fuedal age, even while some where in castle. I watched one of the replays and it looks clear that they have some sort of collection exploit/hack. I timed the resource collecting which was 1.5 to 1.75 quicker than everyone elses. I took a couple screen shots of the stats to show, this is at 9 minutes right as yellow, the first one to hit fuedal aged up and you can see he has over 50% more resources collected than anyone else even with 5 fewer villes at this point. 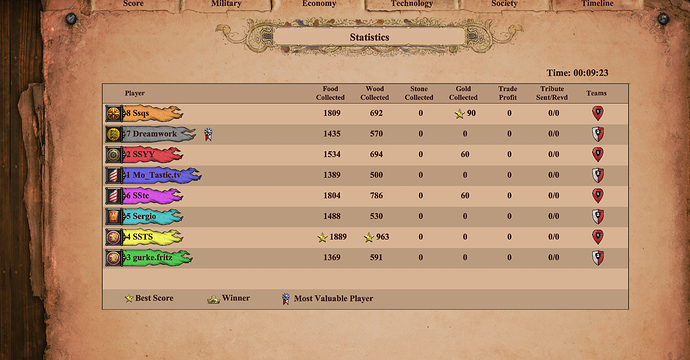 I am not sure how to report this so I put it here. 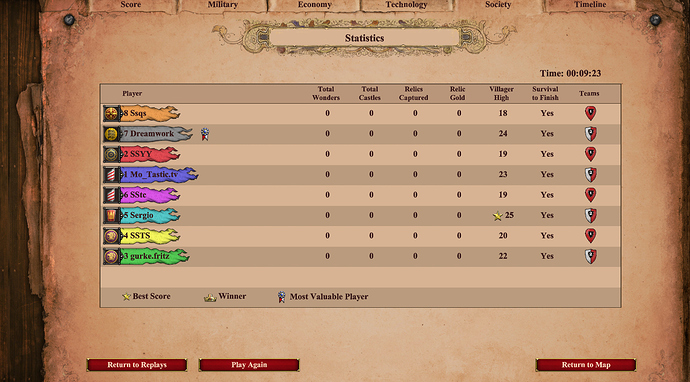 I hope it works.

Whenever you saw something like that, just use the report button in-game.

But I’d like to ask the devs: Add the report button in the replays section too

As Connor McGregor woud say: Devs will do nuthing.

Devs will do nuthing.

Glitching / Hacking, Yes it is a thing boys II - Discussion

lets address “The Elephant in The Room” Just lost a ranked arena game where my japanese opponent had +3/+3 armored longswordsmen in castle which then became +4/+5 champions.Naturally my viking champs where demolished. I had to check the replay to understand why. BTW I was leading the entire game with +10 villagers when we hit castle (he was tower rushing) and 109+vils max vs 89 vilagers in the end with almost full map control. We only fought with champs and i had a real resource lead. So the…

Probably this. MP is cursed and devs dont really care. All because a stupid cheat code for SP.

Report buttons are in several locations in game such in chat, the lobby browser, in-game, and the post-game. Each report includes check boxes to select the reason and an area to include any additional information. These reports are reviewed by a moderator before any action is taken.

Actions are taken based on the Microsoft, and Xbox policies. If you have any questions about what is considered acceptable (and unacceptable) behavior reference these policies.

If the report needs more information than can be provided in game, then send an email to aoesupport@microsoft.com. Please include your Xbox gamertag or Steam ID along with additional details about the issue.

Why did I get banned in game?

Bans can happen based on multiple reasons such as inappropriate content, griefing, cheating, inactivity or verbal abuse. Each report is currently being reviewed by a moderator before action is taken. Any action will be based on the Microsoft, and Xbox policies. If you have any questions about what is considered acceptable (and unacceptable) behavior reference these policies.

If an account is banned, then a countdown of the ban duration will be shown on the main menu screen. The length of ban can depend on the type of report, severity of issue and previous history of bans on the account.

Please email any questions about a ban to aoesupport@microsoft.com along with your Xbox gamertag or Steam ID.

Please send a mail to the devs. Hopefully they will have a look at this bug.

He has second highest vills though.

But IDK. 9 min feudal isn’t really strange if this is pre-patch Persians.

I already had to play with these scumbags, why do they play together and use easy to spot nicknames like they dont care, please ban them already.

Players have been reporting cheaters for a couple of weeks and they are still playing. Please see Riut or Hera streams yesterday in Twitch

Not the same guys nor a resource matter, but I’ve played a ranked BF 4v4 game where one of our opponents had a +4/+6 armor on his Elite Skirmishers as Saracens. Their team mates were Teutons, Lithuanians and Khmer, and none of them could provide such a team bonus.

I didn’t notice that while playing because I was fighting alongside my flank partner at the other side of the map (I was the green one, as shown in the screenshot below), but seeing the replay I just noticed that extra armor coming out of nowhere. Good thing we won anyways 11

See the proof below: 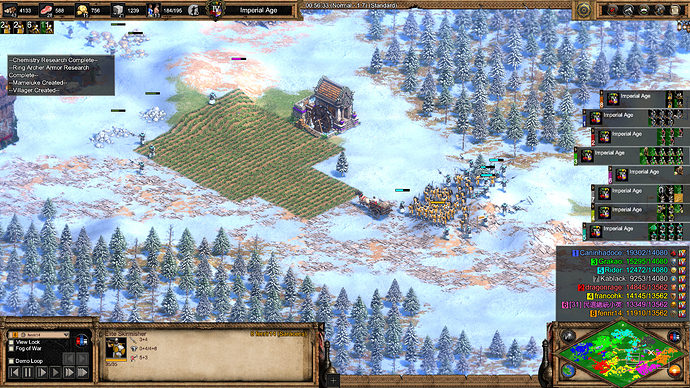 While watching the replay again to post the screenshot above, I just realized he did research Ring Archer Armor twice (resulting in 10 pierce armor for his skirmishers), so not sure if it is just a bug or an exploit.

not sure if it is just a bug or an exploit.

I haven’t played very much this patch, but from my understanding it’s a bug that’s very easy to reproduce accidentally if you click on techs fast enough while having enough resources to research them twice.

Something like this should have been patched out weeks ago

no possible, devs dont care about the game in the same way we do. The fact how the up time from malay is being bugged for more than 2 months tell how little they care or how unable they are to fix these issues.

2 months? You probably mean 1 month. It is one of the bugs introduced in the latest patch. This patch all started with the Malay bug, but turned out in a complete disaster with free tech / same techs multiple times, …