RUS NERF NOW. IT IS GETTING OUT OF HAND. LOOK AT THIS SCREENSHOT 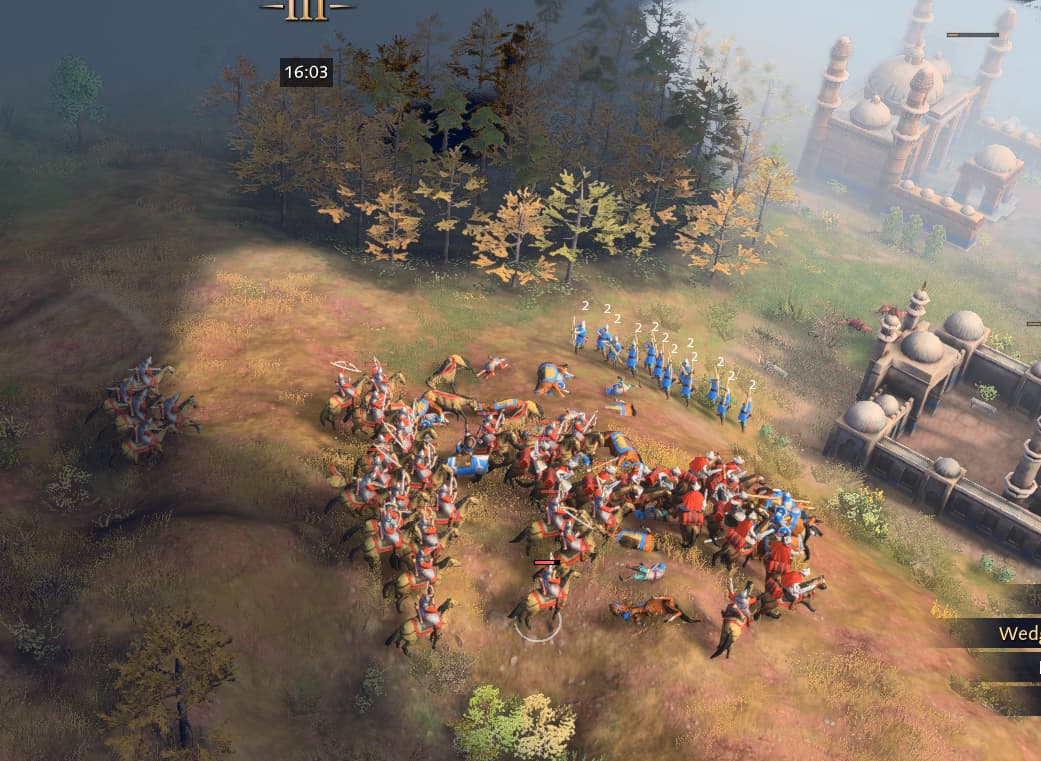 3rd game in a row facing Rus with scout/horse archer spam. Faced this army in the pic even after taking 2 deer camps away from him to reduce this bounty.

Every clown is just spamming this and it has just beaten my knight/horsemen army EASILY. I’m delhi so i have upgrades too. 1300-1400 elo game so i’d say both of us were managing our resources well, no floats w/ market.

I’m pretty sure everyone has comments about their paper counters. I’d say, beyond the strategy, Rus needs balancing cause it is a spam tactic now. Fits all the checkboxes for a nerf, same as royal knights in patch 1 and springalds in patch 2.

that thing is broken, to defeat a Russ player doing fast castle + HA you need to be like 150 ELO points higher

Nevermind the elo, I think it is a problem across the board, and the elo only affects the outcome ever so slightly. The point is that there is little strategy involved in the current Rus meta. Everyone is doing it - spam and win.

There are a few bugs affecting Rus horse archers like faster attack than intended that once corrected will nerf them.

Turtle them, make walls. Most of these people just follow a strict building order their saw on YouTube and when they see their cav archers can’t do ■■■■ they don’t know how to proceed

Most maps (or as Mongols) it’s not viable to wall. Scouts burn through palisades fast enough to be basically meaningless and full stonewalling most maps before 9 minutes is basically impossible.

IMO the biggest issue is it’s so easy to pull off while being so hard for many civs to neutralize. Most civs have to play very well just to stave off the early castle aggression and lose out on relics/sacred sites.

first and foremost. Told ya !

2 deer gold didn’t make any difference for your rus oppenent. especially since they spammed two unit that aren’t gold dependent. and even if they did it’s not 2x 15 gold that will maje any difference in game especially with G Gate in the equation.
't was me for your daily those of facts have a good day ! =D

That is irrelevant. replace “Viper” by “Chuck Norris” and that’s how silly your argument is.
Be honest with yourself and write “i play rus and mongols and got easy win please don’t nerf them” instead.

2 deer piles is the difference of 1 golden gate click for castle which is something like 45 seconds or a minute for castle age time. It’s really strong even without doing well on deer, but if no deer is denied the castle time is insane.

Yes I go for the defender landmark for delhi against rus sometimes. However, see the points below:

Horse archer attack speed is bugged atm so that should be fixed first, then maybe make them cost some gold as well.

2 deer piles is 14 deer. Denying two individual deer yes is likely meaningless, but denying 14 deer is like 210 gold which likely will delay the FC time by 1.5-2 golden gate clicks.

no they are referring to this : and there i learned that apparently cav archer got 3 positive bug to them :

The OP said he denied 2 deer camps from the Rus player which I take to mean he killed 14 deer, and was complaining that the Rus player was still way ahead of him. (Denying 2 deer camps on most maps isn’t hard but requires you to sac sheep or 1 vill to make a 2nd scout which is annoying)

I’m not aware of a bug making them attack farther than intended, but yes they attack faster than the tooltip and incendiary arrows gives them more damage than intended (and makes them attack even faster for some reason)

I play Mongols, and I never* have an issue with rus. If you see you’re going against rus, just throw out a scout first, delaying your age up by like 20 seconds, but killing their hunts, and getting in some early aggression. As Mongols, you can’t play custom games where people say “No Rush X Minutes” because that just goes against what makes the Mongols strong.

You need to get in and get them tf off wood. That’s how you counter them early imo. Then constant pressure with Khan speed arrow crossbow in castle. Bonus if you dedicate a villager to putting up outposts all over the place for Yam speed. I’ve been perusing the forum, and I see a lot of people not knowing how to counter strategize. For the most part, they’re just looking at a BO on YT, and thinking that works for every game.

Mongols are hard to play as it is. I get my ■■■ handed to me plenty, and I have 9d 19h playtime. Only played another civ once to get a daily (Then realized how pointless that was xD ). Please don’t advocate for Mongol nerf, they don’t need it…they started nerfed (Only saying this in response to what someone else replied with, in nerfing Mongols)

I actually think Mongols are one of the civs that can go toe to toe vs the Rus, but on most maps, you have to heavily outplay the Rus player to win if you are playing as Delhi and to a lesser extent HRE, France or Abbasids.

The reason for the Mongol nerfs is at the higher levels of play like 1400+ them and Rus are far and beyond the best civs. Relic has said though they want to buff everyone else to be Mongol level as opposed to nerfing Mongols.

Anyway the rus player could have killed some wolf and take the 2 boar easly to offset that. they may not get tier 3 but two boar is worth 150 gold. And you can do one with 5 pro scout easly. i mean not like Delhi can map control vs Rus. And the deer thing is all about the food from dozens of deer wich are gathered 45/min with no tech or any civ bonus. wich is absolutely not the case for the Rus.