Season 2 focuses too much on competitive players

According to the road map season 2 brings the following new features:

But despite the Color Picker all other things are rather interesting for competitive players.

In my opinion Season 2 has a lot to offer for competitive players but almost nothing for casual players. Hallelujah we finally get the Color Picker. But this will not lead to that more casual players will play the game again.

What do you think about Season 2? Do you also think that the focus is too much on the competitive players?

Ah yes, the "daddy, my brother got one more candy than me

Designing a game for competitive players means designing a good game for all players, because only an interesting, content-rich and engaging experience can attract people for any longer period of time, and steady player interest and popularity guarantee a healthy player base in which competitive scene can grow from.

Ultimately that designation doesn’t mean anything, you can have a competitive scene with 200 and 200k players. And almost any game can be competitive. Even more, pushing this pitch might hurt the game more in some cases, where people not interested in this form of gameplay can be discouraged from trying or sticking with the game.

I’m mostly interested in new story and skirmish-cooperation modes, because core PvP mode is roughly the same thing we’ve been playing for at least 25 years. In itself it’s fine and good and might be the core but can’t be solely that, because we have all other AoE games that are that.

Single-player (fully or mostly focused on it) games are super successful across all genres and people stopped even joking about “death of single player games” years ago. Personally I don’t understand why some companies are so afraid of pushing the genre forward and expanding on it in ways that revitalize the genre and guarantee their own existence.

A competitive scene often is arguably more of a byproduct of a great game design. And certainly isn’t a guaranteed driving force behind player numbers or sales, because the vast majority of people don’t engage with these modes on any regular basis.
In order for IV to be an attractive game there must more focus and resources put on other aspects of the game if these numbers are meant to visibly go up: 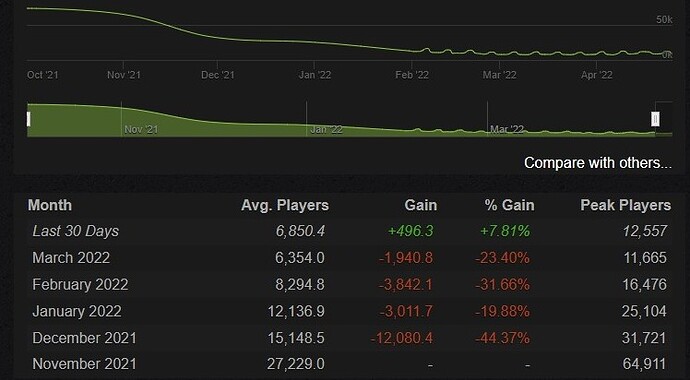 There’s nothing preventing even a PvP-only RTS to reach a couple of millions of concurrent players, but not in this reality. RTS games ain’t FPP shooters where there is a huge ecosystem deriving from generations of people playing these games. RTS genre has been neglected by AAA devs for many, many years and certainly classic RTS games outside of a couple of exceptions have significantly fallen in popularity and market presence.

If MS want AoE V to reach a playerbase ballpark of popular online games they must put a lot of effort into making RTS alive for many years straight. And sole reliance on classic PvP, especially when this game is competing with its siblings, ain’t gonna cut it in the long run.
PC players love these games, but it’s really not 1999 anymore. Imagine potential player numbers that for example a Warframe-like RTS could gather these days, with that YUGE Steam playerbase.
AoE2 is amazing but it exists, HD remaster exists, DE version exists, and creating ‘AoE2 boogaloo v4’ doesn’t push the ambitions of Age of Kings designers by any visible margin.
And if you want to make the same game again, it better be revolutionary in other aspects than core gameplay design, like the technology behind it.

Ah yes, the "daddy, my brother got one more candy than me

I think you are completely missing the point here.

I’m mostly interested in new story and skirmish-cooperation modes, because core PvP mode is roughly the same thing we’ve been playing for at least 25 years. In itself it’s fine and good and might be the core but can’t be solely that, because we have all other AoE games that are that.

No its way better. Aoe2 is basically unplayable after trying aoe4.

You just miss the point of the franchise…want some other genres → play other games.
from aoe1 to aoe:online - the game was about: map + several players fighting.

No its way better. Aoe2 is basically unplayable after trying aoe4.

steamcharts agrees with you… or wait… it does not…
__

steamcharts agrees with you… or wait… it does not…

Because of all the 30-40 year olds already giving up on trying new things. They say insane things like graphics are better in aoe2. And they got angry at viper for switching to aoe4 which he says is just more fun.

They say insane things like graphics are better in aoe2.

terrains & 3d is better than 2d and flat grass.
but knight + cavalry + paladin is better in aoe2 than aoe4. My meaning of better is “I can zoom out in 4k and still understand where are kts or pals. In aoe4 i can not.” Sorry, im not 30+.

And they got angry at viper

who are “they”? and how many of they? I check golden league because theViper.
Hera on contrary returned to aoe2 with words like “strats are the same and players mostly collect armies and camp”

For you it’s unplayble (i’m sure mostly because of 3D + isometric camera)
but number do not lie.

Its unplayable because lack of variety and qol. It feels clunky and old. Not only the bad graphics.

Wait, you’re saying that AOE IV has better qol than AOE II? Really?
Or did I misunderstand something here?

It does. Aoe3 aswell.

I mean… RTS by default is a harder game than a shooter, and uses a different skillset.

Its unplayable because lack of variety and qol

QoL? what is better? not changeable UI? some hotkeys still missing?

PS I only checked the topic to see some comments about TGs etc… but can not just pass by this delusion.

There’s differing opinions on what qol entails, but here’s a list of some of the many improvements I’d put under QoL
-Faster age 1.

EDIT: For some reason the notation is messed up between dots and -, idk why

Other points about gamebalance… not QoL

in aoe4 TGs - the choice is only siege + (kts|pikes|champs|arbs). same ■■■■ for all games.
While in aoe2 you could play any unique unit.
Conquistadors or janissaries or even tuuutons…

So yes, in 1vs1 where you fight in feudal, aoe4 better, but in imp team games where are a lot of questions.

You can. Tab to archer.

Global production queue visible on screen // are you joking? we had it in aoe2 first…and here it was added after 6 months of complains.

Does this one show upgrades too? I cant remember this from when I played aoe2.

Things such as platinum rank makes it more fun

I consider it QOL. In aoe2 you may have had to restart the game.

What? xbox? I dont get what you’re saying

Why are you talking about teamgames? It’s like pretending to talk about chess, but you’re really talking about 4 man chess. It’s not real chess.
Anyway, I do agree unique units are fun, and I’d love to see more of it in aoe4. Maybe the only thing I miss from aoe2 is how you could build a castle and get a special unit. But only from castle.

So yes, in 1vs1 where you fight in feudal, aoe4 better, but in imp team games where are a lot of questions.

Again with the teamgames… Stop it. Also very little time of total play time is spent in imp in real games.

If you wanna claim aoe2 is better for teamgames, I dont really care. Maybe they even are. I don’t play teamgame. I’m fine with the teamgame players sticking to aoe2.

because 70% of multiplayer are played in TGs.

Again with the teamgames… Stop it.

As you can notice, even in aoe4 the number of players in TeamGames is more than 1vs1.

This is very bad. Maybe we should remove team game feature? At least until you reach gold-plat. So people actually have to learn to play properly? Or just give them a copy of aoe2 and get rid of them?Team game players is the worst thing that ever happened to RTS.

Maybe we should remove team game feature? At least until you reach gold-plat

yes… nice idea… force everyone into E-sport classes. Only PhD of E-sport can play TGs.

To your new knowledge: Sitaux/Lix/Paladin were playing only TGs with friends, but managed to win 1vs1 tourneys and beat ■■■■ out of solo players in other tourneys.

There are more skilled players than some low elo legends in 1vs1.

Team game players is the worst thing that ever happened to RTS.

as you blamed others probably you never tried to play TGs in balanced games. (sc2 has sheet tgs.)

do not be arrogant. with your suppirior of 1vs1… it has nothing to do with skill.

do not be arrogant. with your suppirior of 1vs1… it has nothing to do with skill.

The decision to play 1v1 vs to play teamgames is related to mentality. Do you like to take responsibility for your mistakes or not?

Thank you. I don’t like talking with team game players in general. Just complete crash from differing mentality