Some of the aoe2 civs have UU that are perfect for them. For example Britons Longbow man. Some are nice but the design is odd for example Saracens Mamluks who didn’t necessarily rode camels. While some at least in my opinion aren’t a good fit for example French throwing axeman.

So if Aoe2de civs can have some other unique units what do you think those should be? Also some of the original aok civs can use little bit more flavour.

Legionar for byza <3 first thing that comes to mind. There is a mod and i use it vs ai sometimes

I think they were a thing, but not like what the game shows you. 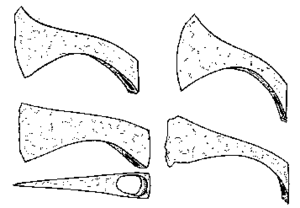 The francisca (or francesca) is a throwing axe used as a weapon during the Early Middle Ages by the Franks, among whom it was a characteristic national weapon at the time of the Merovingians from about 500 to 750 and is known to have been used during the reign of Charlemagne (768–814). Although generally associated with the Franks, it was also used by other Germanic peoples of the period, including the Anglo-Saxons; several examples have been found in England. The term francisca first appeared i...

No, Legionare is Roman, is Ancient Period.
For Byz, first and only, Varangian Guard.

Yup, they were a thing - before the franks used cavalry tho.
I would give then a Voulgier for second UU, considering high/late middle ages. Basically “pikemans”, but with an different weapon - a voulge.

I think they were a thing, but not like what the game shows you.

Francisca Throwing Axemen was a thing in the Iron Age and Classical Antiquity, not the Middle Ages.

They belonged in AoE1. in AoE2, the Franks should have got the Norman Axeman, with a Poleaxe that could “cleave a man in twain” according to the historical legends.

I would give then a Voulgier for second UU

Voulgier or a Lancer would also be good options.

Legionary would have been antiquated for the time. If Byzantines were to get a secondary UU, then Fire Syphons, Flame Lances and the legendary Varangian Guard would be far more suitable, then Legionaries.

By the Middle Ages, Byzantine Legionaries were indistinguishable to any other eastern mediterranean Heavy Infantry, and did not have a specific unique look.

If there are more uus added I would like to see them represent different eras or branched out faction from the umbrella civis.
EG. Byzantines Catapract and Varangians,cat being classical byz and other unit 13th century.
Indians EA and south indian unit to fix north south empires.
Teutons TK for the teutonic order and a landksnet for HRE.
Celts WR unit for dark age and highlander like unit for the 16th century.

If we go with history then delete mayans from game. Thwy didnt exist when spanish came and they didnt exist at the se time as aztec did. Byza used legions and legionars as theyr army + other things so it couls be possible

Legionary just meant a proffesional solider so they named them that even in byza army.
Catapract is just a heavy cav that could use lances/sword, used by many others

If we go with history then delete mayans from game. Thwy didnt exist when spanish came and they didnt exist at the se time as aztec did

mayans did exist in medieval period. The fall of Nojpetén, the last Maya city, took place in 1697. But Maya people persisted after that as well.

few cities did most did not so what is your point?

what is your point?

mayans did exist in medieval period

Few cities wich didnt call themself maya did. Mayan EMPIER fell about year 900.
Roman empier survived to about 1450 and we dont have it in game?

The Maya civilization (/ˈmaɪə/) was a Mesoamerican civilization developed by the Maya peoples, and noted for its logosyllabic script—the most sophisticated and highly developed writing system in pre-Columbian Americas—as well as for its art, architecture, mathematics, calendar, and astronomical system. The Maya civilization developed in an area that encompasses southeastern Mexico, all of Guatemala and Belize, and the western portions of Honduras and El Salvador. This region consists of the ...

i study history few cities that werent connected is not an empier. Most of theyr activity ended by 900 it also say that on wiki. 11

Mayan is a people which are still active.
This game has goths celts huns which are not active in the middle ages.Not all the civis in game had empires or eemperors eg.korean celts.
Youur argument is invalid and wrong.

few cities that werent connected is not an empier

Italian city states, why are they in game?

it also say that on wiki.

Most of theyr activity ended by 900

well what is this?

they didnt exist at the se time as aztec did

ok so then where are romans?
Ok maybe you both did not understand my argument was that byza used legions (proffesional army) in theyr army, i was responding to some one thatsaid this would not fit history.
Maya started to colapse becous they split up and they had few kings. culture of the maya did not survive. The people were maya and i like that they are in the game but if we only whanted history of the game few of thoes that you listed shouldnt be in the game but i like that they added them becous they are really important for history

You have the successors of Romans in game.
Italians (obviously), Byzantines (Eastern Roman Empire), Franks (Holy Roman Empire). How many more Romans do you need?

yeah they split up and became other states and empiers, hmmm like if you took cities with different kings that were colapisng and name them maya