Sentinels are much to weak

I think a good way to look at this is to compare it to other musk units and see if they hold up. The three I want to compare them to are the Ahigaru, the Janissary, and the standard Musketeer.
If we compare a Fully buffed Sentinel to a Musketeer we see that they have 3 more attack, and 22 more hp. While this may seem good don’t forget that the Sentinel costs 60/40 food/coin compared to the musketeers 75/25 food/coin as well as 20 wood for housing compared to the Musketeers 10. The extra wood cost is hard to deal with itself, but paired with the higher coin cost you have all types of problems. Now you have to go out into the open to gather mines and if you try to defend those vills with your musk, they lose all their advantage due to no longer being buffed. You might say “well then build an outpost”, but that’s an even greater investment of wood (and coin if you want a Commandary), which you are already short on. Due to these facts they really end up being worse than a standard Musketeer.
But when we compare them to Janissaries and Ashigaru they look even worse.
Janissaries Cost 90/25 food/coin and they cost another 10 wood for housing. Now in total cost that’s 5 more resources than the Sentinel, but with the heavy wood and coin cost of Sentinels the Janissary is probably actually cheaper. So how good is this cheaper unit? Well compared to an unbuffed sentinel they have 60 more hp and only 3 less ranged attack. When compared to a Fully buffed Sentinel they still have 38 more hp but 6 less ranged attack. So in the end they get even more outclassed by Janissaries than they did by standard musketeers.
Now let’s compare them to the Ashigaru, probably the best early musketeer in the game. Ashigaru cost 80/40 food/coin and 10 wood for housing. They end up costing 10 more total resources than the Sentinel and just like the Sentinel they are heavy on the coin. But unlike Malta, you can send out vills to get that coin due to the Ashigarus speed. (and the fact you have a mobile barracks and stable) So the coin cost does not hurt near as much. Now looking at a Fully buffed Sentinel and the Ashigaru the Sentinel has 2 more hitpoints, and 2 more attack. They finally win a cost-effective fight!!! Well, except the Japanese mobile barracks also boosts their attack and their wonder makes them cheaper. So even staying Within your town right next to your TC, you still lose.
I really like the look of and the idea behind the Sentinel. But really they’re just a much weaker and more boring Soldado. Now I’m not saying Malta is weak, but I want to do more than just spam Xbows. But the way they function now that’s really all you can do. Even with the Sentinels age 4 card they still get beat by other musk because at that point it’s not the cost of building houses that matters but now it’s the fact that I can’t have near the units my opponent can.
I don’t have a specific fix but I have some ideas I’d be willing to share if y’all to ask.

Overall I agree with your sentiment.

I do believe Malta is ever-so-slightly underpowered despite their interesting mechanics.

In return I think the fixed gun can use a small nerf, though I’m hearing many say that it’s not OP.

About Sentinels - I think they’re actually just about fine as they are - With the age 4 card maybe being buffed to 55% instead of 45%.

Malta has better Pikes and good goons for anti-cav, and sentinels are good - but only as defensive units and after the appropriate cards.

So the options are there, just not in the form of an offensive late-game musketeer. And that could be chalked up to being one of the civs weaknesses.

I don’t have a specific fix but I have some ideas I’d be willing to share if y’all to ask.

At the very moment, the 2pop space is what seems the least fair, just changing it to 1 will level the fields without being broken at all.

Other than that, maybe buffing something less consequential, like making the siege damage same as a regular musketeer, or 20 melee damage instead of 18. 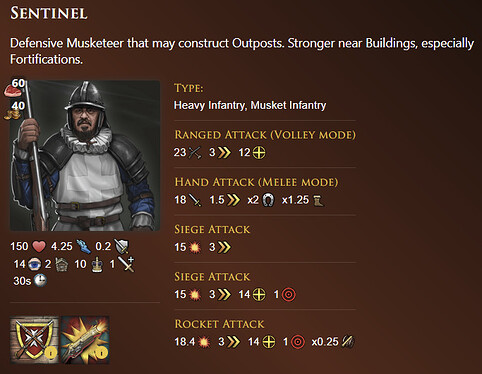 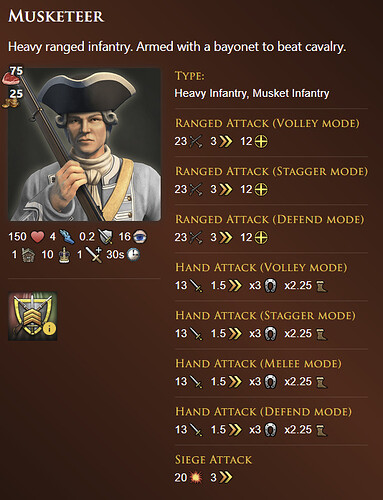 I like them as they are, think of them like the Musketeer version of Strelets.
The defensive boost of 7.5%/15% is multiplacive of their stats after upgrades and cards including the 2% .

At the very moment, the 2pop space is what seems the least fair, just changing it to 1 will level the fields without being broken at all.

Crossbowman and culverin of Maltese need to be nerfed III - Discussion

Yeah so I think the best solution is just to buff it rather then then change the pop since its much easier to fine tune % stat change then effectively just doubling it per pop. IIRC their defenders aura is final stat based so if we just introduce small changes to buffs it will scale pretty well in the end game. So just off the top of my head about the sentinel upgrades (not accounting for the HP bonus) it gets about 2.8x stats from all of its upgrades and then the final defenders bonus which s…

I don’t think Malta is actually very weak over all due to how good Xbows are. (although you can’t use them for long in treaty) I mean comparing Fully buffed Sentinels to plain musketeers they really don’t keep up. Especially in the late game. I can agree with them needing a bigger age 4 buff and I don’t think the fix has to be making them 2 pop. But they definitely need some kind of buff.
While you may be able to choke this up too “well they aren’t good in the late game, that’s just their civ”. I mean, you want civs to be well-rounded, one trick ponies get boring very fast. And I don’t think helping them be better post imp will be too strong for 1v1s, but it will make them more usable, and fun, in other modes.

I think I might have a cool sorta-fix/sorta-buff. What if instead of a 7.5%/15% bonus, we give them extra range and some ranged resist. I think this would be a cool way to simulate them getting behind and shooting from buildings. And I think it would ultimately be better than more hp and attack when around buildings. If you did this you would probably still have to buff some of their card upgrades but I think it would be a cool change.

age 3 and only around walls

age 4 and with extra unit cost

True, but they get more expensive at the same time, maybe the 45% card could increase their pop to 2, since they would be too pop efficient with the entirety of the buffs.

give them extra range and some ranged resist.

Could be interesting, but not in 2nd age, for anyone with xbows it would be a nightmare to counter.

Personally I would like to see them as 1 pop to help them in the early game, but in return make the age 4 rocket card just give you just rockets no attack and HP bonuses. Thoughts?

That sounds good to me.

I wonder if they could just change the wall-boost card to do that. Or make the Sentinel an age 3 unit with that implemented and just get rid of the card.

IV age card, isn’t enough they are really bad, they work better in the late game (treaty) as a vill building towers and forts than a musketeer

I play a lot of malta and while xbows are usually the go to I think sentinels are a little underrated. The defensive boost takes into account their stats after upgrades not base stats so it’s very good and actually makes them some of the most cost effective units in the game, even more so when considering the 2%+HP. The downside is the 2 pop but it’s best to think of them like strelets, very inefficient pop wise but very cost effective. They pair well with a few hospitallers left in stand ground behind your sentinels to absorb 25% of incoming damage, the 2 units also share a combat card and both benefit from church techs.

The only thing I agree with is boosting the age 4 card so they become more useful late game and don’t suffer so much from being 2 pop.

meu antigo post WHY DOES THIS UNIT OCCUPY 2 POPULATION?

If they removed the rockets card and gave them a card that made them 1 pop in age 4 instead they would be much more effective.

I like this as well, I want them to remain a 2 pop unit but with some form of recourse late-game.