Siege towers are for figs

Siege towers need to be fixed. They need to receive an additional function.It could be as simple as archers garrisoned in them could fire arrows. With a slightly increased cost I believe it would not change the game mechanics or meta significantly.

What do you think.

With current cost giving ability to fire is ok. Just for simple wall transfer, price rn is insane. I wouldn’t mind if it was no gold unit.

although i agree the siege tower could do with a buff indeed, maybe price reduction and drop range increase? to get over thicker walls?

In general i’m very sceptical vs weird ideas. But even I have to admit, that siege towers shooting like a tower would be really cool. For stats i could immagine something like 5 base range (affected by fletching etc.), minimum range as towers, and maybe a base attack of 5 or 6. Siegetowers should also move faster, if a archer is garrisoned (maybe not as extreme as with infantry, but still). It would be a silly little feature, probly hard to balance though (unless you dont want to see all flanks going for siegetowers all the time and driving around). Thinking about it a bit more, they probly should have less range than xbows in castle age, to give them some disadvantage.

For stats i could immagine something like 5 base range (affected by fletching etc.),
minimum range as towers, and maybe a base attack of 5 or 6.

I agree, and I also think that it should work not be able to fire arrows unless archers are garrisoned in it. I don’t think that it would be too overpowering. Plus it would be historically accurate. Archers did use seige towers as a platform to fire flaming arrows into the city and take out other archers on walls. 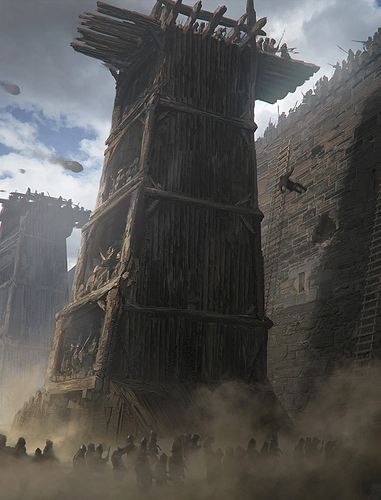 Siege Tower can stay useless as before as usual. Just attack whenever Archers are garrisoned? Besides Siege Tower buffs speed on Infantry only and slow for Archer.
For attack use Archer.
For speed use Infantry.

Also I think that it would be better if they would move slower. They should not be able to outrun teutonic knights.

Only infantry affects the speed so far. Archer is still slow. About Teutonic Knights I’m not too sure. You won’t be using Teutonic Knights to chase Siege Tower. But make it having minimum range to become more counterable by melee units.

That sounds right so far. I just remember playing matches with teutons and having RAMS with infantry in them out running my teutonic knights. how bogus is that. Big heavy wooden and metal structures that have to be pushed or pulled by a lot of people can move faster than a man on foot. I think that siege towers should be more realistic in their movement and be super slow.

Currently the siege towers have a speed of .8 without inf and teutonic knights have a speed of .7. I think a reduction to .5 would be fair. Additionally 200 wood cost and 160 gold is so much for a siege tower currently. How much do you think an updated one should cost. I think that you could leave it the same.

This no-attack unit costing riddiculous gold cost already. Gold unit we make for aggressive push meanwhile Siege Tower is just doing nothing. Just use it for meme build. It’s a mistake making one of them now. I still can live with no-attack Siege Tower if they make it gold-less.

I would love for seige towers to become a functional unit somehow but alas I just don’t see a way of doing it properly in this game, because the main reason siege towers were used in real life just doesn’t exist in this game so it will always come off as a bit gimmicky. Siege towers were used to approach ramparts so that the attackers could have a way of reaching the walkway on top of the rampart and take it from the defenders, giving them a foothold into a fortress. Being able to take the high ground like that was a real advantage in real life. Not only do we unfortunately not have real ramparts in AOE2 walls are not really that much of an obstacle to begin with either with rams being able to easily take them down and archers being able to shoot over the top of them with no penalty on accuracy whatsoever. Not only that but walls don’t even block your line of sight so you can clearly see and attack everything on the other side provided you have ranged weapons. At the moment there is really no need for siege towers in the game outside some very specific surprise attack strategies which just isn’t what siege towers were all about, nobody ever “surprised” a town by sneaking a few units in over the walls through a siege tower cause in real life you’d see that thing coming in a mile away.

Now if you REALLY wanted to incprporate siege towers you’d have to change a few fundamental things about the game (which will never happen but lets speculate for the ■■■■ of it anyway):

This will never get implemented in AOE2 but I do hope some of these ideas make it into AOE4. There is so much potential for cool gameplay mechanics I hope they really get creative with it.

The thing is range disadvantage for units that are shooting from an elevation just seems odd. Range should mirror range of whatever unit is in it. But just make them super slow.

Just so you know Siege Tower used to attack units. It was like land Longboat in early FE days. Functionality still present according to .DAT file. Problem is wall passing feature made the whole thing broke. Because attacking is overridden by wall-passing. Just those old genie engine limitations again.

Ah I didn’t know this… I must have only got into FE after they had already patched that. So does that mean each unit only gets one kind of “special ability”? How does that work?

Yea the more I think about it the more siege towers just don’t seem like they can work in this game in a way that doesnt feel cheesy and “tacked on”… When you think about it its pretty hard to not make it a broken unit by giving it too much of a buff, as if it was cheap then it would pretty much just completely negate the usefullness of walls, and if its not cheap… well there is no need to get it… Again the problem comes down to conceptualisation, siege towers, even in the real word did not equal immediate instant access to an army to the other side of a fortified wall. Disembarking troops still had to bash their way through layers of defenders on the ramparts just to get a foothold ONTO the wall itself, getting down was in itself another battle which most likely included fighting people in spiral staircases of towers or the use of ladders on the other side of the wall. Not to mention that the spatial restrictions of a siege tower meant that soldiers could only funnel through a few at a time… none of these things are really simulateable in AOE2. The fact that you just click on the ground and your troops are all of a sudden magically on the ground in the enemy base and can then run amock is what makes siege towers in the game a problematic unit to integrate properly. Basically if you made them so that everyone could just buy a bunch of them and instantaneously get over your expensive walls why would anyone bother building a wall anynmore? It basically becomes a pay X amount of resources to just walk through the enemy wall without a fight. And nothing else quite works like this in the game, everything else you need to achieve you need to still fight and use some skill but not with siege towers.

No really special ability. You can check the Siege Tower unit in .DAT file. Siege Tower in HD/DE is just broken. Userpatch made it a bit workable to some extend but then again Userpatch needed to keep this broken feature all due to HD/DE.
But the point is you are paying 200w and 160g just to pass 5s Stone Wall. It’s absurd. You can’t pass any units other than Villagers, Infantry and Archers. Siege Tower often time can be useless if your enemy makes double layered wall. Even if you managed to pull off Siege Tower wall hop successfully then what can you do afterwards? Use it as Taxi? 200w and 160g for one time wall passing and using for Infantry Taxi? Dumb to me even by design choice.
Also remember that Arena games gives you 20 minute of peace. I know there are some sneaky wall hop or Tower rush strategy but in general you won’t face any hiccups until 20 min. A player can easily deny Siege Tower push is easily. Like said before double layer wall and making units at your own base. You can well prepare your base you want to.
I still can accept current condition of Siege Tower if it’s a goldless unit. In AoE2 game design standpoint gold units are designed to provide high damage output and Siege Tower is doing exactly the opposite.

Siege tower has been used as taxi, rarely seen to jump walls, its cost doesn’t justify its function, it doesn’t need to shoot arrows, just lowering the gold and wood prize, since your enemy will have more economy and defensive buildings, while you invested strong in wood by making the siege workshop and then 200 wood 160 gold for one single tower plus whatever army you were creating, it is insane.

I mean, at first sight you could just park it up as goths against a wall and keep garrisoning units in and out, but thats tedious and then you remember petards, 20 gold per boi, 2 bois per wall. Kek. So the cost is just stupid. The gold cost needs to be significantly reduced to less than a ram, because although tower can get your units bypass the wall sooner, it only works as long as its alive and is micro intensive to keep putting units in and out while also controlling the units already inside the walls.

Thats where the underbidding should start at, yes.

Siege towers seem like they don’t even belong in the game, like the only reason they are there is for campaign and scenarios.