Sieges are not buildings like depicted in this game.

It is operated by engineers and other personnel. On the battlefield, soldiers simply kill those siege operators and that would mean there is no need to burn the “trebuchet” for instance.

It is so wrong that players already hate sieges in this game.

As long as melee units throw torches, sieges will be the most hated and unbalanced unit in this game.

Due to its enormously high HP, movement speed it operates just like a “Tank”.

Sieges in medieval warfare were so fragile that archers would threaten it easily, Cavalry would just annihilate. Guess what? They never tried to melt cannon barrels, siege machines as it is a total waste of energy, time, men, and resources. They would just use arrows and melee weapons to kill those operators. It is 100x times faster and more effective approach against any siege. Again, siege machines without personnel won’t work, so the concept of a melee attack from AOE 1, 2, and 3 needs to come back to sieges.

Some pictures to illustrate why sieges need to be fragile units. 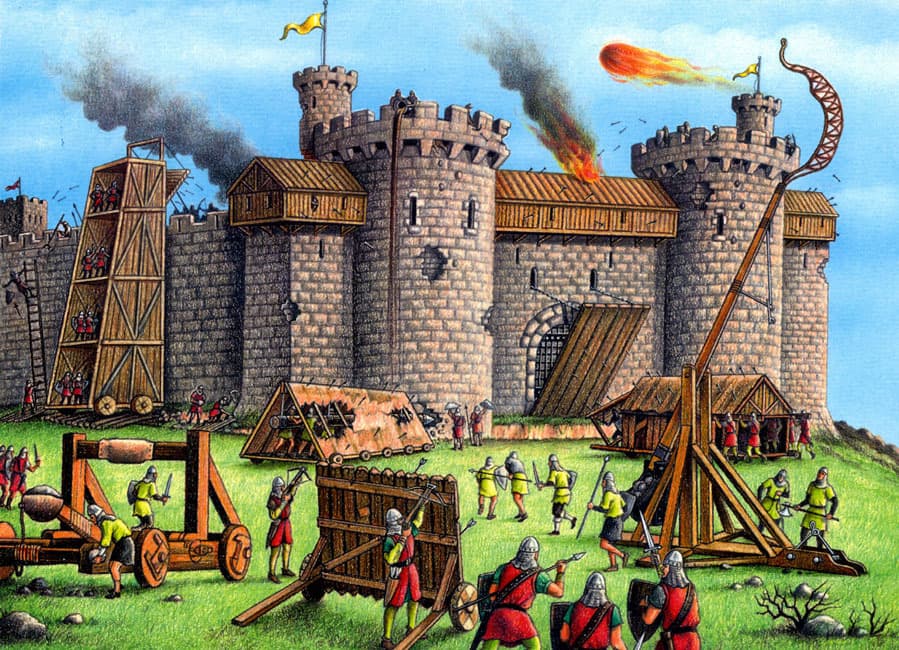 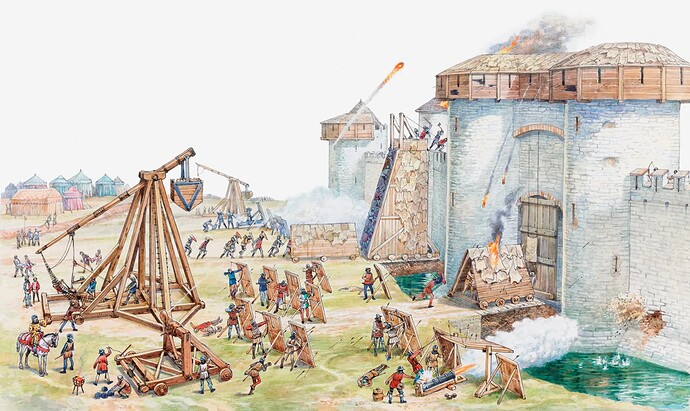 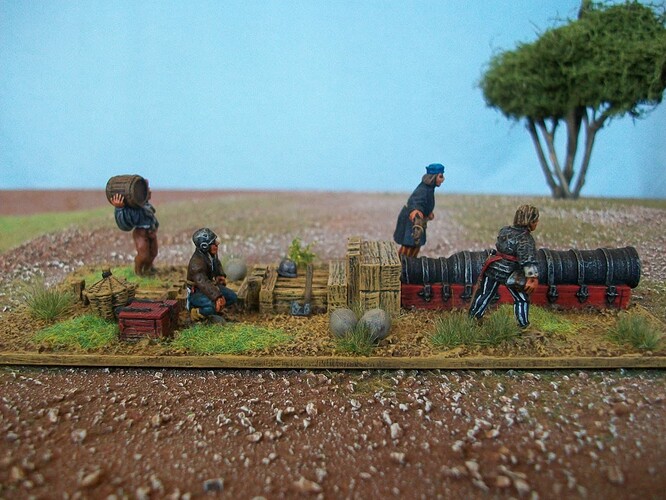 All the pictures illustrate how exposed the siege operators are.
This should help to develop more ideas of counterplay.

Since closed beta I said this about siege in general

Relic did a lot of good improvements, they listen to us. They need to listen more.

You are right. Make siege 15 tile range and add crews.

I said this after play my 1st game
Like wtf is with having to be in mele and my royal knight dose same damage as a scout or a villager? This is broken and always will be till they remove touches and let you do real daamge to siege.
Team games are even worse. people dont even make units…just siege

I think the POP LImit may be a game-changer to siege, similar to ships, what do you think about?:
Springald stays at POP 3
Ribauldequin/Culverin POP 4
Mangonel/nest of bees and Trebuchet POP 5
Cannon POP 6

This won’t fix the issue that bombards outrange and outdamage their counters, have ridiculous health, and shoot and move at the speed of modern battle tanks.

If anything nerfing the other siege would make bombards even more prevalent.

Anti siege range needs to be increased to outrange bombards by at least two tiles at all times, every civ should get access to culverin, and all siege should be extremely vulnerable to cavalry and melee infantry, even arrows should be more effective.

Bombards are literally tanks, if you think changing the population will fix that I don’t think you’ve played enough team games.

Also 200 pop in 2022? Can we please get the option to increase population cap in custom matches like come on.

Sieges need a heavy nerf and a pop increase as not to spam a army of them is what is needed asap the game is not fun with seige till some heavy nerfs happen.

All siege should have significantly reduced speed.

Bombards should do the same damage Trebuchets do against infantry and cavalry. Perhaps even AOE damage, but drastically reduced. Have them be effective against walls and buildings only…

We’re more interested in hearing what you all think.

Maybe I’m simplifying, but are you all saying you’d prefer a “glass cannon” sort of deal—where siege units are treated more of a high-damage, low-health, slow-speed, but high-range standard unit (as opposed a “building”)?

Sieges need to be a support unit that allows players to destroy Walls and Keeps effectively.

Sieges such as Mangonel or Nest of Bees should be effective against a large number of units that are close to each other.

However, all of them need to be fragile as it is a support unit (And operators are pretty exposed - except rams and siege towers).

Currently, the issue is that sieges don’t have any non-siege counters. And all melee and ranged non-siege units trade ineffectively.

Yes I agree with others.

Give it lower movement speed, lower health. If possible in your engine give it friendly fire just like AOE

Right now it is too powerful and encourages people to spam seige and not think. Seige feels too decisive and like it has no skill and is mandatory. It should be in some ways but not to the extent is in AOE4. It stifles gameplay and makes the whole game more boring. Same with many areas of AOE4 but this is the one this thread is about.

Another thing we said from the beta was that stone walls need more health , its very low at this moment , just two bombards can take a wall down in 1 second.

but are you all saying you’d prefer a “glass cannon” sort of deal—where siege units are treated more of a high-damage, low-health, slow-speed, but high-range standard unit (as opposed a “building”)?

Thank you so much for giving this the attention it deserves, I am ecstatic!

Edit: High range, but please make sure every civ has anti-siege that can reach as well, it’s frustrating when your anti-siege gets killed by the siege it’s supposed to counter.

I like the idea of high risk high reward. Right now Siege is high cost but very very safe and very very rewarding (bombards and mags).

IMO if springalds which have the exclusive use of counter other seige units can 1-2 shot mags but at the same time 2 shots of mags can wipe a small cluster of 95 HP ( or less) units; I think that’s fair IF we make the tile/s speed of seige very very slow.

I’d say if u have a sufficient group of infantry units at max range of mags that they should eat 1 shot equal to half their HP then be able to run the mag down and burn it before the second shot EVEN if it retreats immediately after the first shot.

Now for Bombards… they are just toooo strong, not just their HP, but the siege power trivializes Walls and buildings IN SECONDS? It isn’t unusual to afford 2 bombards; let alone many many more as the game progresses further into Imperial age. Bombards are similar to the early springalds where it can do everything (except this time it really can do everything including siege exceptionally). I believe the counter system SHOULD be cost efficient.

If Bombards are to stay the same power level and the same current 1k cost THEN I’d suggest springalds deliberately out range bombards and it take 3 shots or less to kill a bombard (2 springalds cost 1k, 1 bombard cost 1k, so it’s not unreasonable if it took 2-3 shots for a springald to kill a bombard).

Exactly! Like in AOE2, AOM or other RTS.
In AOE2 there is also a bombard which is super balanced. It is strong vs buildings and other siege and moderate vs range units like archers. But a Paladin needs just 5 hits to kill a bombard and it can’t shoot back (you must protect your siege very well).
Siege in AOE4 needs to be much more fragile to cav/ melee. It cannot be that an imperial knight needs like 20 hits to kill a cannon… In addition, this torch is a slow and bugged attack animation.

In AOE4 you win mostly the games if you have just more siege. That’s stupid.

until they remove the ridiculous touches to hit siege . it will always be op and broken. Case closed.
Having to get into mele and use a weak touch that dose the same damage on a unit that cost 200gold and one that cost no gold is crazy!!
Unit should do there normal attack they have on siege and you can reduce there damage to siege units a bit for balance or whatever. Like archer only do 50% damage to siege or whatever.
3 fire lancers charging should take out a bombard or 3 royal knight charging should take out any siege 1 hit.

Siege units work just fine in Age of Empires 3. Falconetts are countered by Culverins or other falconetts, since they have low HP and get destroyed by 2 Falconett attacks.

Currently almost no one is using Trebuchets, they are very expensive and rams are less risky to use and more effective.

Mangonels are fine. Nest of Bees on the other hand are much worse Mangonels. They have many bugs which are still not fixed since stress test. Despite them not shooting 8 attacks like they should, and the fact that most of these 8 attacks miss constantly, you decided to do balance changes for Nest of Bees instead of fixing the bugs first. I disagree with this.

Don’t forget what you said about unique units being stronger than regular units. This is not the case for Nest of Bees, they are still worse than Mangonels and still bugged.

You need to decide what you want bombards to be. Should they be strong anti-building? Currently they are very strong against buildings, so players make Rams in Age 2 and 3 and Bombards in Age 4 in favour of Trebuchets. Or should bombards be anti-units? Then you should consider adding splash damage to them and have them deal bonus damage against infantry. Just like Age of Empires 3.

Also consider adding proper animations and physics when units are shot by cannonballs like in Age of Empires 3. Aoe3 game has much better animations. Siege units have impactful visuals in that game. Thats not the case in Aoe4. Also Aoe4 siege units create too much smoke which makes it hard to see whats going on.

Ok so lets say they nerf the HP.

How are you supposed to defend them? Lets say there is 10 bombards and you leave 30 spears to guard them. Spears cant stop 50 horsemen running to bombards and insta killing them. How is that balanced?

Even now its easy to close up with the siege weaponry with horses and if siege is squishier it becomes worthless unless spears start one shotting horses. It shifts meta to spam only horses.

And if you leave your whole army to protect the siege then rest of enemy army just rushes top of bombards and throw couple of torches and they blow up.