Did anyone notice how significantly the graphics improved in the latest stream? Imo it looked bloody 4K and crisp and that river was gorgeous!! I was so surprised! The game environment looked so beautiful! I loved watching the stream!

Just wanna tell the devs that all the improvements, we are noticing and acknowledging!

It was just unfortunate that watching the French felt similar to watching HRE. As the keep looks similar and the buildings as well. The galleons and arbelestiers looked great! Although the way AOE II Arbalestiers look actually would have fit the Royal theme for the French.

But watching metal culverins explode into splinters is so off putting. Can we please fix that?

I suggest keeping the exploding splinters for small wooden siege. MaYbe if they want, they can keep the animation for small siege like springalds. But they should look at the destruction animation of siege in AoM like the catapaults. It makes so much sense for catapaults and treb when big wooden siege collapse in on each other. And with the smoke animation it would look far better. And maybe have them light on fire from the damage since trebs especially are so big so watching them burn to the ground would be so weirdly satisfying!

They should mix the siege destruction from previous age games which always made sense. This animation in AOEIV just doesn’t make sense. Please devs! Definitely do not enjoy watching a giant treb explode into a few splinters either and leave behind this tiny wood chip pile.

Mmmm nope, it looks the same

They have to add those missing animations on buildings such as stables etc to make them feel more alive.

I will make a post about adding a crew on siege, man seriously its a deal breaker, I lvoed the graphics in that last stream but those unmanned siege omg…it looks so cringe…

More than cringe.
It’s like back to the 1990s, 30 years back in time of game development.
It’s horrible.

I am sad, it looks terrible. I think they still have a lot of work to do.

There are a lot of improvements necessary I agree.

So far I think the best feature in this game with the least amount of changes required is the naval battles. Still wish they would add more water physics in terms of ships bobbing up and down in water rather than parked.

And at least for me, it looks bad when a trebuchet rock hit a building but u see some other side of the building collapsing instead of the specific hit lol Even AoE 3 have logic in that sense, you see falling the pieces that got hit in first instance…

Dust clouds should not have appeared here.

I don’t know why game looks better in their promo vids but not as good when streamers play it even when they have a beast rig. and I hate the camera views they tease us with in these promo videos. It would have been epic, if we could actually see the battles from such camera angles.

Age of noob @Oestrichh specifically pointed out this dust problem in his videos, its just not accurate. How can there be dust, when units walk on grass? and when they walk on sand, there should be footprints. the smoke is incorrect as well. arrows from castles should’t produce smoke. and when cannons fire, their smoke hides all units in front of them.

In general, in the new videos, the graphics have become much nicer to the eye and clearer details have become, plus there are more details. I like what they’re showing us now. And visual bugs with shields, etc. will be fixed. Maybe they show us streams on the old version of the game, and videos about nations on the release version (as written for them). There are no such bugs visible. In any case, errors of this kind are corrected quickly.

I mean, I’m glad people are excited, but literally nothing has changed graphically in any of the developer match streams. It looks identical to how it did in the technical stress test.

On top of that:

Honestly, my reaction to these streams has been the opposite: I am now fully convinced that there are basically no changes to the game since the open beta and technical stress test. I expected that given that they gave themselves no time to fix anything, but this basically confirmed it for me.

Really worried that this will actually release in like 10 days.

Can someone post some comparisons of before and after? It looks the same to me. Maybe red tones seem a bit brighter.

They need to be hosted on something like Imgur because this forum massively compresses images.
Which makes it hard to compare them.

Can someone post some comparisons of before and after? It looks the same to me. Maybe red tones seem a bit brighter.

Not that it is the only comparison, but look at the river in this video. This is also Mongolian Heights. The river looks pale blue, which has been the standard colour of the water for both the ocean and the rivers. The stones look dry even though it is in the water.

The river has a deep blue colour. Of varying shades, the stones in the river look different to other stones. Yes the biome is different but playing the stress test, no matter what biome I chose, it didn’t change the colour of the water. But yeah there are many other differences

So I watched the stream more carefully, and there might be some changes to terrain in terms of details.

For example, you can see some leaves in the forest in the picture below, as well as more detailed brown grass in the stealth forest and some new doodads. Not sure if these are specific to the map being played on or not, but it definitely gives the idea of more texture. Hopefully they look as good on graphics cards that don’t have 8GB of VRAM. 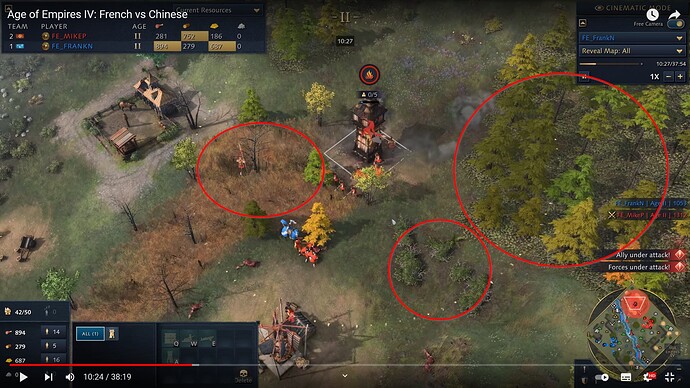 I still have a problem with roofs not reflecting light, which makes them look as if made of plastic: 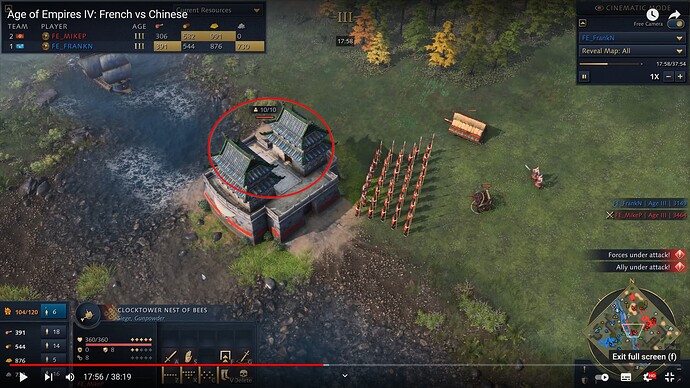 The impacts in the game still feel lackluster. Just look at the charge below between a French Knight and a Chinese Spearmen. It almost looks like the Knight is the one who’s being affected by the impact, while the Spearmen is unphased:

The Keep shooting arrows still looks awkward, you still have smoke coming out of the arrow slit, the arrows come out too rhythmic (machine gun effect), and just look at those units being chased by the guided arrows:

They did add craters to mangonel impacts, as it can be seen bellow, which makes it look a little better than the unimpactful shots we had before:

“Clocktower Counterweight Trebuchet” shots (what a mouthful) still look underwhelming when hitting buildings in the frames where there isn’t animation for building damage:

They did update the Chinese farms to grow rice, which is a nice touch:

So all in all they are improving the graphics, but there’s still a long way to go, and I really hope they don’t slow down the rate of adding improvements immediately after launch.

They did update the Chinese farms to grow rice, which is a nice touch:

I agree the changes and updates are minor but very welcome. It takes someone to watch in max res and with very critique like detail to see the difference.

But I want to tell thae devs that even these little details are very noticed and appreciated. There’s no excuse for devs to think they need to simplify things for clarity. And people saying negative things aren’t saying negative for the purpose of being negative or having an “agenda”. We notice improvements and appreciate them. And we just want the game to be the best it can be