I understand italians are strong on water but I think a slight land buff would be nice.

Koreans and Vikings are strong water cigs with very strong land presence
Vikings having a strong eco bonus while Koreans having SO and siege engineers and halb.

I also compare to the Portuguese who have a strong naval presence while having almost identical tech trees they get siege engineers and halbadier and yes italians get a gunpowder discount but Portuguese have a discount for ALL gold units.

I don’t want italians to be overpowered so i think
Halbadier would be nice as Genoese crossbows are hard to mass due to needing a castle and are hard countered by onager due to being slightly slower than crossbow/arbalest. And while they have hussar / cavalier to deal with siege onager they are easily delt with by halbadier.
So In conclusion I think getting siege engineers and halbadier would be nice, especially since they don’t have heavy ram siege onager or heavy scorpion. If you think this is too unbalanced let me know and please explain why. Thank you

Good idea to buff Italians on land, good idea aswell to make them a pretty good counter to cavalry civilizations. In Castle Age I’d say they have no problems versus cavalary (full upgraded pikemen, aswell genoese crossbows are good in since DE buff on reload time decrease). In imperial age though, yes the genoese crossbowman are hard to mass, and they don’t have halbadier. I disagree with giving them halbadier, since it also kinda forces the Italian player to make genoese crossbow versus cavalry. I think that the elite upgrade needs a buff, as you said it’s really hard to mass. Since DE, it is also very expensive to upgrade them since they don’t get the benefit of the reload time decrease, as it was given to the non-elite aswell. What I would do: Decrease the Elite Upgrade training time from 22 to 19 seconds. Now it will be much easier to mass and a horde of paladins won’t shred the Italian player. It will also be somewhat more worthy to buy the Elite upgrade research now.
Regarding siege, I agree they should get siege enginiers an/or heavy scorpion but nothing else.

Those are good ideas for a slight imperial age buff…but what about making the condottiere a slightly anti-cav unit? Would resolve the above mentioned problems without breaking the tech balance.

They already are among the civs with the most techs, I don’t think it’s necessary to give them more. Also sure Genoese Xbows are harder to get, but unlike pikemen they have range, you can use stacking techniques, all that stuff… which means you don’t need a melee unit with +32 bonus damage against cav. Also unlike Portuguese Italian get Hussar, Squires and better archers so it’s not like they are a straight downgrade or something, and their BBC are cheaper.

but what about making the condottiere a slightly anti-cav unit? Would resolve the above mentioned problems without breaking the tech balance.

I’m calling no to halberdier. The genoese could move as fast as normal archers if that’s a problem. Pikes with genoese already counter cavalry so good compared to arbs and halbs, cause the genoese fire faster and they all can hit the cavalry at the same time as opposed to pikes/halbs, their numbers become more meaningfull than arbs supporting halbs. Also if you happen to lose your infantry line completely, the genoese can still fight back and own up, arbs might have trouble.

About the siege engineers, well I’m not against it or in favor. I need more information on the italians as a subject to make an opinion. I haven’t played them much and they have the bombard cannon after all anyway, with a good discount.

Edit: I actually checked and according to these: 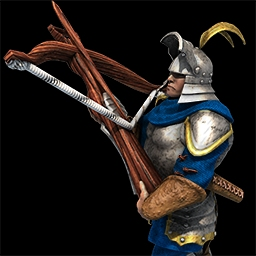 The Arbalester (called Arbalest before the Definitive Edition) is an archer unit in Age of Empires II that can be trained at the Archery Range once the Imperial Age is reached. It is the final tier in the Archer line. The* indicates that the...

They both have the same movement speed. Also just in case to back up this statement even more I went and checked it in the editor in-game and yes they both move at the same speed. So I don’t know where you get that idea from but please don’t state things that are not true in your arguements when proposing changes.

Edit2: oh and to top it off, the Genoese has less frame delay than arbs. Definately a better matchup against onager if you were forced to take that fight.

Edit3: I’ll have to correct a mistake here, Genoese have less range so they are definately a worse option against onagers x] However that works against any archers anyways and you have bombard cannons.

Those are good ideas for a slight imperial age buff…but what about making the condottiere a slightly anti-cav unit? Would resolve the above mentioned problems without breaking the tech balance.

And for the reason stated already in my first reply to this topic, the Italians already have enough anti-cav properties, the condottieri needs none. Condottieri is just a fast moving weak champion who can fight gunpowder much better.

I agree. Although not every civ needs to be super strong on both land and water, there should be a reasonable balance between these two which imo is the case for civs like Persians, Japanese and Vikings but not for Italians. Some time ago, I suggested replacing 50% cheaper dock techs by 50% cheaper university techs which would be really nice for their archer/gunpowder compositions. Or maybe just give them 25% cheaper techs for each of the two buildings. Sadly, my topic wasnt taken up by anyone but see here if you’re interest in the details.

I don’t think that the italians need the halbadier, pikes in imp combined with genovese crossbow are enough, they only have to act as a meat shield.
I think the problem is in the GC, they are strong versus cavalry (and decent versus infantry), they are difficult to micro but they are more hp and armor (plus you have also more armored arbalest).
The problem is that they are too difficoult to mass, the decrease of the reload time is good, but they take too much time to train, if you compare the GC with other UU archer you see that it has one of the longhest training time, 22s for the GE, 18 for the longbow, 16 for the rattan and chukonu (to me the last is too short considering that is a beast, you can find the numbers in the wiki), to me they have to lower it at least at 16s in castle age.
Maybe they could also use a a buff on the condottieri (plus 1 pierce armor so if you hit fast imp you can spam them and raid better) or they they could receive siege ram or siege onager, for better counter enemy skirmisher.
As for siege engineers i don’t know, it’s supposed to balance the cheaper bombard cannons, which are less expensive than a trebuchet.

Also Genovese Crossbowman should have their bonus applied to Cataphract too.

Also Genovese Crossbowman should have their bonus applied to Cataphract too.

Except, cataphract has bonus armor higher than what genoese has attack bonus against cavalry. However, cataphract is already weak against archers anyways, archers are their counter. So genoese with attack bonus would just be OP lol.

They don’t, also cataphract have only 1 pierce armor (knights have 2), their bonus is simply negated. https://ageofempires.fandom.com/wiki/Cataphract_(Age_of_Empires_II)
The problem is that the cataphract are weak to hight attack archer (longbow, chukonu, rattan to some extent) but to them GC are only arbalest with less range that train slower.
Just watch some videos of this game where the Viper use them versus the cataphract. It also show the problem of the trainig time.

I like the idea of a discount on the university (a bit like chinese) but if you take even half of the discount on the dock tech they become sensible weaker on water (the only reason why people pick them).
If you just add it i fear they would become too strong (may only a 15% or 20% if you bring the dock discount to 40% not lower thought).
You can’t also take away the cheaper age up, maybe you could substitute it with the gunpowder discount, though BC cheaper than trebuchet is handy, still it would meke them more viable on eraly caste age rather than on late imperial age.
Another idea would be free ballistics (or cheaper like 50%), it would help both on land and water, thought i’m the first to say that this could be overpowered.

They don’t, also cataphract have only 1 pierce armor (knights have 2), their bonus is simply negated.

No I said exactly as it is, they have bonus damage against it, which just gets negated completely by their bonus armor. Samurai works differently, it has bonus attack on an area cataphract has no bonus armor on, but this is ok because even then samurais are not the best option against them. Not too shabby either though.

Which is the point of the cataphract. Which means, Viper made a mistake using them against it and wasn’t aware how this unit matchup works. Even pros learn new things every now and then.

You have arbalests to use against it. You are supposed to train both units to fill up your ranks.

Train training time could be lowered though, but I’m not really aware why it is what it is right now so if anyone more familiar with the italis could enlighten this conversation up. But if there is no reasonable reason why it is so slow, could be made lower indeed.

I don’t know about the university, one civ already has that (one of the africans iirc, on my phone, wont be checking that out now).

I agree with these changes, i didnt really think about decreasing the training time of the elite genoese. very solid changes

Please no buff Italians, they already do everything good!

but wouldnt portugese also have cheaper BBC as well as trebuchet? with a 15% discount on all gold units?

Ports have a 15% discount on Gold only, but to all Gold units.

Italians have a discount of 20% all resources, but only on Gunpowder units.

Italians discount is much stronger, but more focused.

They can get 5 for everyone else’s 4, which makes it a great trade off.