Steppe Lancers as a replacement for knight

I purpose giving Steppe-Lancers to Indian while removing knights for Tatars, Cumans, and Mongols, while also buffing Steppe-Lancers. I purpose giving them +1 melee armor and +5 charge damage with no cooldown and the only condition being that they are actually charging. I also purpose decrease their target range to .5 they will still do the same attack but by being closer to their target it will hopefully be easier for them to do more damage. Also, I am purposing changing the HP Mongols bonus to 10/20/30

Yeah we thought bloody wars on this forum about the topic of removing knighrs from tartaes, and Mongols (maybe leave cumans), and adding them to Persian and Indians (even if Jsut non elite)

Hundreds of posts. Multiple threads, went on for like a year.

I have buried this dream together with non elite war elefants for Indians.

You cannot remove Knights from Cumans, again, diversity, the key difference between Tatars and Cumans is the fact Cumans have Paladins. (minus gimmicks)
I totally agree that Tatars shouldn’t get Knights or at least Cavaliers, they feel very generic at the moment.
Though not as a replacement for all regional civs, it’s tempting I know, making a historical justice always is, but we have to act resposibly, we dont want all of these civs to end up as a generic Camel+Steppe+CA, especially if you’re inviting Indians to the party.

People, you have to look beyond the little change you’re making, what game are we going to be left with.

for Indian I think it’s a no brainer they lack knight but giving them knights 2/3 with their food eco would be broken. Both Light cav and camels fall to fulfill they need something to act as a main Cavalry and Steppe Lancer fulfill that rule. Also, removing knight or cavalier from the Tatar puts more focus on their unique unit

except your changes won’t do that.
1 melee armor will help them against melee units, but what about early castle age archer play? they have 1 pierce armor, they only have 80 HP with bloodlines. to put that into perspective, an early castle age knight will tank 40 shots from an xbow. a SL will tank 20 shots. massive difference. the knight is a unit that can, with just a few of them, clear up almost all early castle age armies, and devastate any feudal army. Even with your buffs, the Steppe Lancer won’t do that.

Also - everything you see about the way the Steppe Lancer works screams that it’s supposed to be a LIGHT CAV unit.

literally every bonus that impacts the steppe lancer impacts the light cavalry line but not the knight line. for each and every civ with steppe lancers. furthermore the unit description says light cav not heavy cav.

I agree with you regarding your intentions, Steppe Lancers currently has no room in AOE II, since they lack a clear purpose/role/identity. Overall a poor history-driven design.

With that being said, you simply cannot remove Knight from Mongols and Cumans, you’re going to turn all these regional civs into the same civ eventually, that’s too painful.

In regard to their weakness against archer you are right It doesn’t make sense for them to have less pierce armor than Light cav though this might make Indian Steppe lancer Op vs archers.
However, I disagree about calling them light cavalry they are too heavily armored especially the elite version.

In regard to their weakness against archer you are right It doesn’t make sense for them to have less pierce armor than Light cav though this might make Indian Steppe lancer Op vs archers.

except it does, because they are better then the light cav line against melee units.

However, I disagree about calling them light cavalry they are too heavily armored especially the elite version.

really? what makes them heavily armored? they have 1 total armor baseline (and pierce at that, not melee armor), only 80 health at elite (before bloodlines) and they move at 1.45 speed baseline. nothing there screams heavy cavalry. 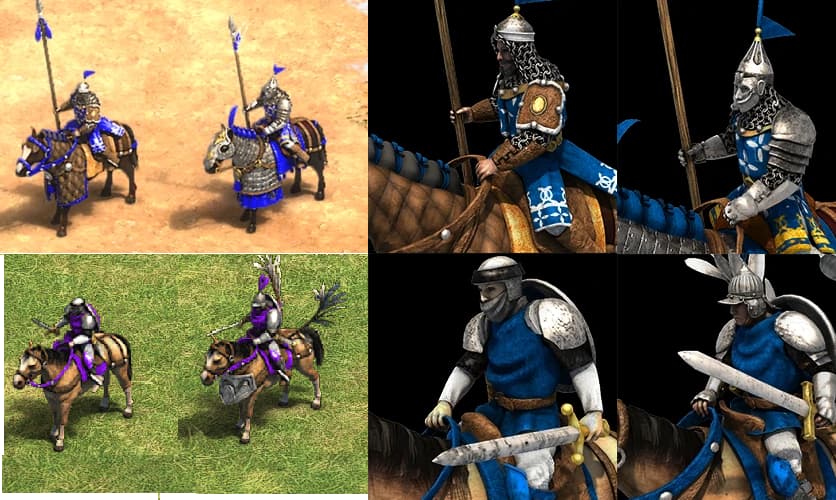 Just buff the SL to have +2 PA like SC and Knights, nobody will make them anyway but at least they won’t be pure trash

Steppe lancers aren’t that bad. They are just with the wrong civs.
Really, I jsut made some tests with steppe lancers. Once you have a group of 40 + they trade efficient against almost every melee unit in the game (with the patrol stacking micro). Yes even Halberdiers and Paladins.
But these civs just have better “mass to win” option in the cav archer (UUs).

Again, imo the steppe lancers need to have a destinct role to be useful in small numbers like sniping siege and adding some extra punch to cav formations. The way they are still designed just doesn’t fit the civs they are in, as these civ have such strong cav archers. Either the steppe lancers become totally OP again or they stay almost useless if they are in that competition with these cav archers.

In other topics relating to this, there was probably some people who proposed that Huns and Turks should also have Steppe Lancers.

Maybe, but not me. I just need Indians

I purpose giving Steppe-Lancers to Indian

Stepp lancer should be a unit for the stepp civis.India is not a stepp people.

Neither Huns, you can argue about the Turks represented the Seljuks, but they could be an entire different civ more alike to the Persians which clearly don’t need SL

Looking back, I don’t think the buffs are enough purposed are enough Imagine If the Mongols Hp bonus applied to knights giving them 150 or 147 Hp that would be incredible broken and yet no one really makes Mongol Steppelancer at least not at the Pro level despite what would otherwise be a Game breaking bonus. Same problem exists with infantry civs where they need otherwise gamebreaking bonuses to be viable

Who needs Steppe Lancers that has Mangudai?

Look up mughals history. I can’t be bothered to copythe Wikipedia part here a second time to explain why step lancer fits very well with Indians