Steppe riders and Iron Flail needs some base damage buff

Steppe riders especially. They are on the brink of unusable without any card upgrade. One thing really set them back is the low damage output vs anything that is not a skirmisher. These units really shouldn’t just straight up lose automatically vs other cavs. My suggestion is to give them higher base damage and lower damage multipliers, so that they still deal the same damage to skirmishers but more damage against other stuff.
For example, change steppe rider’s base damage from 15 to 20, and reduce the multipliers vs infantry from 2 to 1.5.

Overall the Chinese cavalry need a kind of buff, because they are really weak at the late game (A Gendarme spam basically eat alive the Chinese 100% of the time).

Gendarme spam basically eat alive the Chinese 100% of the time

Gendarme spam eats all Cavalry alive. No civ can fight Gendarmes or carded-up Axe Riders, with their own Cavalry, this is not a Chinese balance issue.

Those units are just designed to win any Cavalry fight, so you have to use advanced anti-Cavalry to win, like Halbs and Changdao.

Idk china cav are meant as range tank/snare cav, the fact that they lose to other cav/musks is sort of the point and they can fight against musks to a certain extent, especially meteor hammers and their range melee.

steppe rider for example are very good at snaring and harrasing range because they have a very small hitbox and also speed of a dragoon. this means that they can chase off dragoons.

The only buff I would want to make is maybe have steppe rider affected by double sided armour as well, for that ultimate tanking experience

This is one suggestion I think which will buff China without making them overpowered. Just make armor affect all china cav.

Dragoon spam disagrees with your statements.

It is not like Steppe Riders and Keshiks are strong units anyway, and it would open the possibility of Cavalry decks for China, which are still not viable because of how many cards you would need for all 4 Cavalry units.

Just to note why you do need to becareful on how to buff china cav. iron flails with double sided armour have about the same range tanking power as vet nagi with HP buff, and nagis are considered pretty good at tanking.

Iron flails are also cheaper and comes with meteor hammers

Steppe rider are not a cavalry unit you should build when you need cavalry. They are extremely cheap, fast siege unit (if you havent noticed, they have huge siege for a cav unit), costing only 1 pop. You can use them for hit-and-run tactics on enemy buildings. They are definitely not to be used against other cav, and definitely not in late game.

If you need cavalry, make Forbidden Army. To counter cav, make pikes and changdaos. The issue with China’s anticav is absence of proper goon. Keshiks are a joke.

Keshiks are like ryuters, you need them in mass before you fight and since they don’t have melee armour u do need some units in front unlike normal cav archers.

Oh god. They do have double firerate (so 100% faster not 50%). That is insane. What do people complain about with china’s anticav then?

because its really hard to mass them to the point where they become effective as you also have to upgrade them and possibly send mongolian scourge for them to be viable-ish in age 3. traning them is also difficult since to do so effectively u need to build a castle and then still have the left over steppe.

Most chinese units are fragile specialist that requires mass to become powerful, thats why the chinese FF and FI is powerful cause you mass a large amount of units very quickly

The issue with Chinese armies is that you cannot mass the single unit you want, or else they would probably need quite a few nerfs.

Fully upgraded and carded Keshiks are better than most Dragoons, in terms of damage, the issue is that you cannot just make 5 Keshiks, like you can make 5 Dragoons, and therefore you will be pop-capped and limited in the number of Keshiks you get.

If you could make Keshiks individually, they would be, by far, the best Ranged Cav in the game.

They are essentially Port Dragoons, costing only 1 pop.

China should be given a cheap way to recruit illegal units to supplement the lack of units.
The emperor of China will pardon criminals on special days to show his benevolence.or, when the emperor thinks military costs are too high, he can enrich himself by merging and acquiring rebels.
The famous one is Nicholas Iquan(鄭芝龍).
He led a pirate fleet of thirty thousand people and a thousand ships to submit to the emperor of China.

Oh god. They do have double firerate (so 100% faster not 50%). That is insane. What do people complain about with china’s anticav then?

Good question. They have low HP so they are quickly sniped by Skirmishers. To train them properly you need to build a castle (250 wood and 100 coin), because you’re not going to want to train the Keshik+ Pikeman army.

People are sleeping on Mongolian Scourge, its obviously a powerful card once you do the math on it. But the problem is people still keep playing China in the old meta way instead of trying out something new. The 10 Keshik card in Age 3 for example is worth 1150 ressources, substract 150 for disciplined upgrade and you have 1000 ressources worth of value. Obviously its a good card. And so is the new Beyiang Army card which was just buffed. But still people don’t include 10 Keshiks in their Decks. Why not? I don’t know why. Its worth considering above 11 Changdao in my opinion.

I presume most people think China is a braindead faction and spam Territorial army all day long, but thats not the case. Iron Flails benefit from Mongolian Scourge aswell. Players should put in more time to test new strategies with China.

China already has cards that add Mercenaries (like Iron Troopers) to the Temple.

Outlaw units are incredibly bad anyway, so you would not want those in your army for long.
Iron Troopers already are very strong, and better than most Mercenaries as it is, since they are Archers that kill Cavalry and have 60% Ranged resistance, and 25 Damage with a big bonus against Cavalry (2X if I am not mistaken).

They are basically Caçadores that also deal well with Hand Cav and have even greater Ranged resistance. 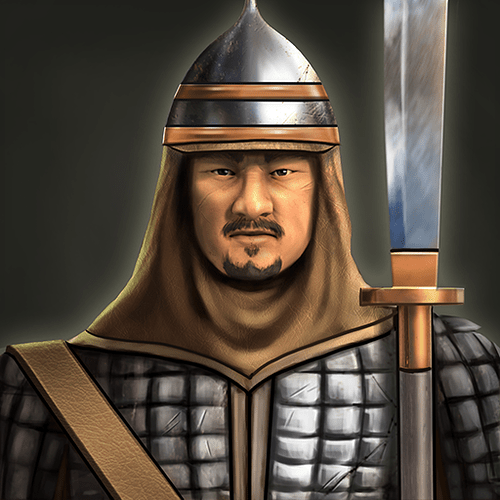 I will discuss mercenaries and outlaws-unit separately, because technology and cards also treat them as two groups. As I said, Outlaw-units is good for China if it can be cheaper. It can train the lacking army separately, and China Relatively high population ceiling.

For the Sioux who are also related to outlaws-unit, I recommend giving them more enhanced technology or cards instead of cheaper.

They should give Native civs access to Mercenaries and Outlaws too.

Small hitbox? Are you out of your mind? This isn’t some kind of FPS game. LMFAO steppe riders as ranged tank and snare dragoons. 150 base HP and 15 damage is NOT going to do anything against dragoon.