Suggested Balance changes for Delhi (my most played Civ)

Biggest issues that need to be addressed in my opinion:

*Civ only has one inherent eco bonus in the berry gathering. Sites give a little bit more gold, but only after researching a tech. Other than that, every single civ in the game will have a BETTER economy after researching the same eco techs, because they have other built in bonuses that Delhi lacks. They are “free” but actually not, because all the techs require an investment of scholars, mosques, landmarks, and population space that is neither collecting resources or fighting. So there is a significant cost.

Re-work landmarks:
*Dome of the Faith: Simple and effective. Only Delhi Landmark that I have no quarrel with.

*Tower of Victory: Also gives bonus attack speed to cavalry… OR is a map-wide effect not based on aura around it. Even with both of these I still think that the cheaper scholars with a production building for them is still better, because the civ relies on scholars to function. Other suggestion: Completely scrap the concept and replace with a different landmark!

*House of Learning: Also functions as a university. Can garrison scholars inside to boost overall research times and immediately gives access to university technologies upon reaching Imperial age. This would go a long way towards making those hard to ever research imperial techs more accessible! Also consider tinkering with the technologies available inside, most are extremely weak. Honed blades is good for Maa but almost useless for lancers, Reinforced Foundations is ok, saves some wood cost on housing, but the rest are so weak. Can be improved or replaced with new ideas.

*Suggest to completely scrap this weak design and create something that boosts Technology research, preferably together with some new unique techs to give Delhi something interesting in the Imperial Age!

Units:
*Delhi needs something non-vanilla on their unit roster in Feudal Age. Either a new unit, a weaker version of an Elephant unit or even a early age version of a Castle Age unit. Something to bring the civilzation access to what every other civilization gets in Feudal age.

*War Elephant: Far too weak for its cost against anything that isn’t cavalry, buildings or siege. Very vulnerable to massed units of almost any kind.
Suggest:
*Give it high ranged resistance against the Archer line. Still leaves it vulnerable to Xbows, but at least counters something ranged.
*Trample damage to all units surrounding the Front side of the Elephant (realistic).
*Reduce cost to match effectiveness (If it takes 5 Maa to counter it, then the cost should be equal for example)
*Should receive bonus damage to MAA line as well. Again realistic, guys with swords/shields should NOT be able to stand up to a fully armored elephant with rider. Guys with spears fill that role. Also how does it make any sense that knights are better against MAA than War Elephants?
War Elephant Conclusion: More cost-effective unique unit that counters MAA+Archers in close quarters but is still very vulnerable to spears and Xbows even more than most cavalry due to lack of maneuverability and high cost/unit.

Suggested bonus unit: Siege Elephant. Either a design that features a very slow and heavily armored elephant to function as or even replace the Ram for Delhi (similar to new AOE2 unit). OR Imperial Age unit with a mounted siege weapon on top (not sure which siege weapon, Springald would make the most realistic sense, but can be tuned for balance).

Overall thoughts:
Civ feels very weak outside of a few timing windows when the free techs are researched in Feudal and Castle Age during which the Civ feels quite strong. Upgrading units from a previous age to their improved version is SOOO much harder than with any other civ. Basically forced to trade your army and tech switch to units that don’t require research to upgrade. Example: Switching to Xbows after massing archers, Lancers after massing horsemen, Hand Cannoneers after massing Xbows.
Would overall love to see a civilization with a smoother consistent gameplan through the ages instead of one that is forced to rely on timing windows and to win before the enemy hits Imperial Age and gets their upgrades.
Also, I really miss the ability to research Sanctity in the Dark Age. Why remove this? It’s such a high cost to go out on the map in Dark Age while everyone else is teching up that it has its own inherent cost and can easily be punished or countered by an enemy that scouts what you’re up to. At least this gave Delhi something unique to do in the early game that goes with their identity.

lodge at least 12 scholars, make 2 smithies and in conclusion the time is not long, with 2 smithies, or two madrasas, it is like dividing them in half 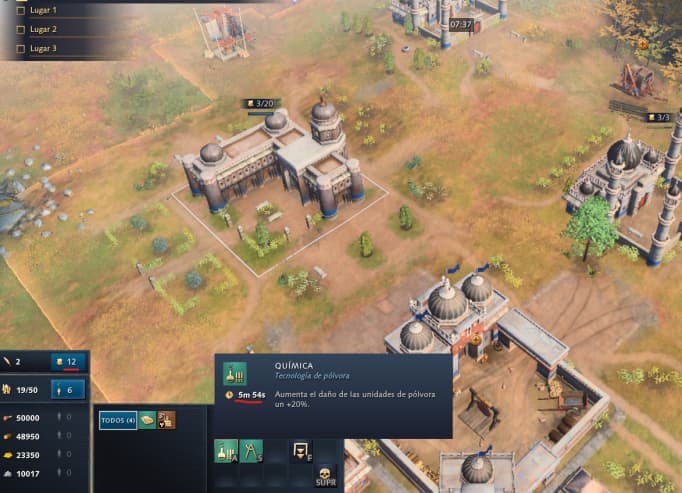 it is because 1.125 from the madrasa is an average, first read the entire thread that I shared, look at the image, it is 5 min and 54 seconds, you speak for the sake of talking and without reading everything [delih] [promedio]

I’m still kinda annoyed Delhi lost their early game specialty (super early sacred sites) and didn’t get anything else special. Free techs are cool but not exciting… I dunno, I’d like some unique option for Age 2 at least in terms of army. Maybe some special unit that isn’t necessarily strong but just lets you do something different?

Also, where are my elephants with Bombards on them!?

I know how to do all this. But in the midst of an action packed 1v1, to invest everything you mention just to get 5 minute imperial age upgrades is ridiculous. With your example that is an investment of 12 scholars and multiple buildings and even with all that it’s 5 and a half minutes of gametime, which is an eternity when waiting for an upgrade, and that is just for ONE upgrade in Imperial age. What if I want to research more upgrades? Well, then more universities and scholars is your answer.

What you mention is all theoretically possible. But realistically a player cannot continue to invest so much in the long-term when their enemy is already attacking them with upgraded Imperial age units. I can’t just ask them to wait for 5+ minutes, now can I?

how not?, the dome costs half, 75x12 = 900, just compare with all the cost in gold of economic technologies and blacksmithing, if it is a great advantage

Castle age for the Delhi is already fairly strong, so the castle age landmarks don’t really need castle-age buffs. For House of Learning, the ability to research maddrassah techs would be a nice effective buff (and fully in line with its description), but would have to be implemented in a way that prevents overlapping tech locations.

Hisar Academy: I think either changing the resource or allowing the player to change the resource in game (possibly with limitations) would be an effective fix. My first concern with this is that Delhi have a large amount in gold savings, so it is possible that extra gold generation could become game-breaking. My second concern is that stone generation might be a bit game-breaking as well (especially if combined with Compound of the Defender). Or alternatively, change into a madrassah with reduced research times (somewhere between 3x and 5x multiplier instead of 15x)

My reasoning behind the maddrassah suggestion/idea: My experience is that these techs are the hardest to get. The maddrassah is rather expensive (450 wood - a bit of a hefty investment, especially right after the imp tech-up, though still less than what other civs would spend to get a single imp tech). Maddrassahs also cannot be built ahead of time, so you have a short delay while you’re building them. The techs for other bulidings either seem far less potent to me or are already easy enough to “speed up” that the free techs still feel like a nice boon (or quirk) rather than a civ penalty.

While you can make Scholars to reduce the time it takes it still is ridiculous that the default time is 15x the normal time, 3x, 3.5x and 5x is pretty fair for dark, feudal and castle respectively but 15x is not okay.

While Delhi have no special military units in Feudal they do get to build wood walls which is pretty good, but i wish that the Victory tower were a viable option to make Delhi military more interesting. I think it would be reasonable to make Scholars cost only 100 gold (the same as prelates) and change the Dome of the Faith to make scholars faster or some bonus other than cost reduction and also change the Victory tower so it allows you to make better military units, or early MAA or it just gives you the Forced march tech.