I’ve had it happen a handful of times where an icon is greyed-out and I’m not sure why it’s doing that.

For example, in the screenshot below, you can see I want to build a Bombard Cannon. I can afford it, no problem, but it’s still greyed-out; so my initial reaction is, “Why can’t I build it, then?”. Then I realize I need to research prerequisite techs first and I don’t always know which ones. I think it has mainly become a problem/more noticeable now that we have the greyed-out icons.

Therefore, I think it would be great to specify exactly what techs are needed to build the unit and where to research those techs. Would help newcomers, as well as players who are trying out civs they don’t normally play with, and players who haven’t memorized the tech trees.

But if that’s deemed holding our hands too much (which is possible), or proves to be too complex of an effort due to all the combinations, then please at least put in bold red font next to the cost something like, “PREREQUISITE TECH(S) STILL NEEDED”. (After seeing the above specific examples, though, I admit this one would pale in comparison in terms of usefulness.)

No huge font needed. No line-break/carriage return needed. Just put it in-line after the cost and let it word-wrap to the next line if it gets too lengthy. 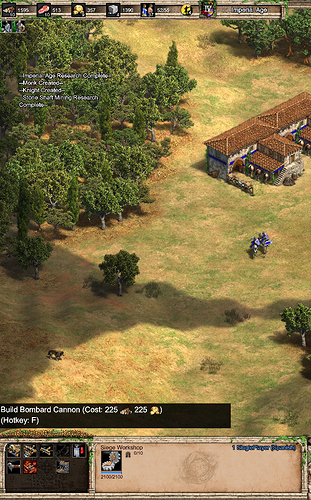 Another example: I wanted to build Fast Fire ships for a recent challenge. I rarely build them. When I’ve built them in the past, I’ve already researched all their necessary techs so their icon shows up. (In other words, I don’t usually seek them or their prerequisite techs out proactively.) So, when I needed to build them for the challenge, I saw their greyed-out icon and for the life of me I had no idea what tech(s) to research. After researching about 4 or 5 ‘wrong’ techs at the University and Dock (like throwing darts at a dartboard), I finally stumbled upon the correct one (“Dry Dock,” or something). So, it would have been great if the greyed-out icon said the following when you hover over it (THIS IS JUST AN EXAMPLE):

For a few moments, I thought my inability to make them was a bug. Same feeling has happened a few times the past few weeks for various items that are greyed-out.

Thanks OliveCereal4714! Well, all I know is that I was in Imperial Age, had a lot of techs researched, and Fast Fire was still greyed-out. So I went on spending spree researching techs until it lit up

Fast fires don’t require chemistry xD. They don’t require anything at all. No offense, but you should double check the tech tree. Everything ispretty much explained there. Even more, it tells you which units need chemistry tobe to be researched first

btw the Requires chemistry is already shown in the Techtree view, but ofc not in game.

Fast fires don’t require chemistry xD. They don’t require anything at all. No offense, but you should double check the tech tree. Everything ispretty much explained there. Even more, it tells you which units need chemistry tobe to be researched first

I’m aware of the tech tree

Mid-game, it’s not my idea of fun. Also, when posting on the forum here, I had already launched and exited the game a couple times and [ALT] + [TAB]'bed to it a few times for other posts I was working on and such. I was done bouncing back into the game for the night since it takes a while to launch and start a game. It wasn’t a critical component for my suggestion here, so I let it be. I figured the devs could figure out that I was just giving examples, for the sake of argument.

Even to do the first half of my post (Hand Cannoner), I Google searched for a Tech Tree to help me talk about stuff more specifically – as I didn’t want to jump back into the game. That tech tree image told me nothing about what was needed for Fast Fire ships, though, once I got to that part of my post. And after writing a few forum novels the past hour (this post plus two bug reports), I just got lazy

You can see here, the Tech Tree I looked at has Dry Dock in the Fast Fire row… so I figured that’s what was needed: https://imgur.com/gallery/AEG0C8J. I know it’s for Age of Kings, but it was the best I could find in a pinch. And it was clear as mud in terms of what, specifically, might be needed before Fast Fires.

That’s pretty confusing. No wonder everything else wasn’t working. Don’t get me wrong; I’m okay with it not making sense on the surface, but if the game could communicate that to me real-time, awesome! I don’t like jumping into the tech tree.

I know, but I like the greyed-out icons. I just wish they had more info. If I keep getting confused, though, and no fixes are made, I’ll shut them off eventually, which is a bummer.

Everything you wanna know is at tech trees, really. And if you don’t find yourself comfortable checking them while in a match, give a read to the tooltips. These infos are pretty clear already, just give them a closer look.

The future items sure can be a bit misleading, but what they’re meant to is fulfill more or less what tech tree UI mods do, have a check on what will be available to your civ just with a gaze on the HUD. The means to know how to achieve techs and units are already at tooltips and tech trees.

You an also go to the aoe wiki. It has a lot of infk 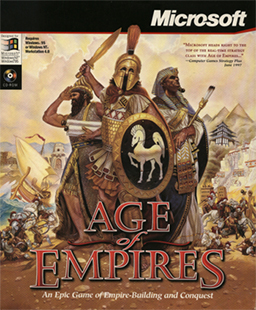 Age of Empires is the original history based real-time strategy computer game set in antiquity. The game was developed by Ensemble Studios and published by Microsoft. It was first released in North America on 15 October 1997. Age of Empires was later...

In most cases the tech needed is just behind the units. I think Chemistry and War galley upgrade are one of the few exceptions.

That’s pretty confusing. No wonder everything else wasn’t working. Don’t get me wrong; I’m okay with it not making sense on the surface, but if the game could communicate that to me real-time, awesome! I don’t like jumping into the tech tree.

If you want, you can check out my improved tooltips/techtree mod https://www.ageofempires.com/mods/details/14335 is called Detailed Improved Extended Tooltips

and most technologies are also improved descriptions, and state exactly what will happen. For example the War galley upgrade in my mod, states that all the 3 ships will be upgraded, and also what each of them will receive in terms of stats

Everything you wanna know is at tech trees, really. And if you don’t find yourself comfortable checking them while in a match, give a read to the tooltips. These infos are pretty clear already, just give them a closer look

My suggestion is to make it so we don’t have to visit the tech tree. Going to tech tree takes too much time, can be frustrating to find the one tiny tech/unit you’re looking for, and takes you away from your game. Plus, if you are playing with others, you have to pause the game and impact their ability to have seamless, uninterrupted fun; or don’t pause the game and get behind for the minutes you spend looking at the tree. The tooltips is what I’m asking to be updated; they lack this info

You an also go to the aoe wiki. It has a lot of infk

I could also do Google searches, visit reddit, ask the forums, call friends and ask them, check a YouTube video, and spend six months memorizing all civ tech trees with flash cards. And any new player or existing player who ever has the same issue could do the same.

To make it clear, I’m asking for the devs to make an in-game/in-match/live solution that doesn’t require you to pause the game, leave the match, consult the tech tree, ALT+TAB to your web browser, or some other solution. The tooltips could easily tell the player what is needed. They already say how much something costs, as well as attack/defense/bonus stats… it isn’t rocket science to also put prerequisite techs needed. Leverage the existing functionality to communicate to the player info that should already be there.

How would you like it if we yanked all the tooltip info and forced people to instead go to the Tech Tree or AoE Wiki every time they wanted to see what a unit or tech does, what its cost is, and what the attack/defense/etc. info is? Doesn’t sound too efficient or fun, does it.

If you want, you can check out my improved tooltips/techtree mod https://www.ageofempires.com/mods/details/14335 is called Detailed Improved Extended Tooltips

Thanks! Will check it out later. Might be nice for the short-term, but a dev-created solution in tooltips is still needed for the long-term… unless they enjoy leaving players in a lurch due to UI change that can be seen as non-intuituve, misleading, and unclear.

The only “required tech” is chemistry for gunpowder units.

I agree. It should be in the same box of the ‘not enough x resource’ box, perhaps with another color. You click but it says ‘chemistry not researched’ or ‘available in feudal age’

Even when you hover over the greyed-out icon it should say something. It shouldn’t require a click. I feel red font would be good.

When clicked, maybe it could emphasize it even more somehow (if the UI already does that for other stuff), but I have a feeling just having the hover note I mentioned in OP is probably enough.

For instance, when you hover over an item you can’t afford, the font is red for that resource on the tooltip note. If you then click that icon anyways, does it give a message? I can’t recall for sure at the moment, but I don’t think it does?

yes both could be done, depends if you are used to hotkeys or mouse movements.

Now I’m playing Cumans, and I have no idea why I can’t research any of the muted icons show below (facetious, but for sake of argument again). The extended tooltip doesn’t tell me what I need to do to build a treb, for instance; which is why the enhancement noted in OP is needed, imo.

I have enough resources to afford the cost, so, now that I’m tempted by the dimmed icon, I need to go on a treasure hunt to figure out what I need to do to build a treb. In these cases, the prerequisite is to be in the Imperial Age. It should say so… 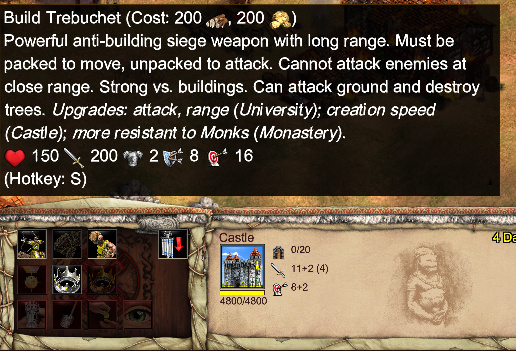 And I’m finding icons all over the place that could use an explanation as to why they’re dimmed out. Again, probably Imperial Age (IV) is needed… 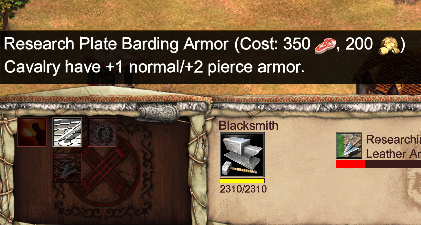 Better yet(?), maybe don’t show icons for an age you’re not in, imo. Having dimmed icons for the age you’re in as well as future age(s) seems odd and confusing to me, and undoubtedly to new players, too.

PS: That tooltip font size is still too big and it’s backdrop too opaque.

Better yet(?), maybe don’t show icons for an age you’re not in, imo.

True. Dont want to lose sight of that.

Hi @Darkness01101, the future items feature had an update. How do you like it so far?