Target audience of AOE 4? Is it more for kids/teens than adults?

I read some comments here and on reddit and youtube about why the devs avoided the realistic approach and the game was created keeping teenagers and younger generation in mind . Maybe, thinking as they start with this game, they will keep playing it for years to come, (just like we did with AOE 2

) increasing lifespan of the game. Could it be true?

When asked about blood and gore, the devs response was-
’‘We want the game to be playable by as many people at as many age ranges as possible,so we intentionally avoid that to keep our rating towards the low end of Teen.’'

I did a little experiment. I showed the gameplay to all my friends as old as me (30ish), and they found it ok, said the same things that they were expecting more. Then I showed it to my 12 yo neighbor, and he liked it and was curious to know more and then another 15 year old kid who thought it was AOE 2 with some 3D graphics mod but he loved it.

It made me think. The comic scaling, the lack of blood, homing arrows, weird civ names, unrealistic animations like castle shooting arrows with smoke like machine gun, siege weapons going poof when destroyed, they all makes sense if the players are younger. They don’t care about the logic, realism or historical accuracy. They just want some effects on the screen, and fun and they will never compare it with other RTS either.

For me, learning that there is no blood/skeletons was incredibly sad moment. This is a medieval warfare game and If a person dies by a sword, there has to be some blood, like prev age titles. This is what seems natural to me. I would even love to see if garrisoned soldiers get caught on fire and start running to save life. This would add so much immersion. 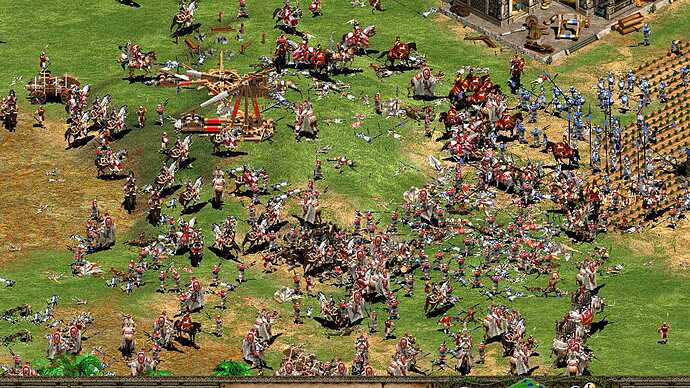 As 30yo gamers, having played hundreds of better games for last 20 years, we immediately notice what is missing, or what should have been there. I never thought of AOE as a kids game, but maybe, as the world is changing, they too are changing their ways. Maybe, there is nothing wrong with the game, its just we are getting too old to fall in love with it.

I played aoe1 and the rise of Rome when I was in elementary school, so yeah, it makes sense

I think the main comments like this is more to adress inter-/national age restrictions, resulting in the game beeing lower rated therefore beeing purchasable by a wider audience.

Gore on top of that, depending on countries, can result in drama and hugely negative PR which Age4 wants to prevent at all costs.

I have a different opinion: actually teenagers like blood and violence. It is us who have been seasoned with blood in games may appreciate the non-blood version. For teens, it is just too cartoon. They want something more exciting and bloody. Remember, teens don’t want to be treated like children.

As a 30yr old Age player myself I would like to disagree. I don’t necessarily need gore and blood to get realistic vibes from a game. Although the sound design improved that part significantly.

I love the artstyle and the direction it is going, it’s clean. Easy and nice to look at. I really don’t need gore at all. My friends who I am playing the game with also do like the current iteration. Same age range.

It just feels wrong to see person get cut down by sword or pierced by arrow, but have no blood pour out. How is this possible? Is he alien?

No blood and suddenly disappearing bodies hurt immersion badly for me. Battlefields through the ages have been covered by rotting bodies and reeked with horrible stench. Sight and smell terrifying anyone passing by. There can be no believable medieval warfare without ground covered with death.

It is one thing to hear narrator talk after the battle of river colored red by blood. Other thing is to actually see this directly in game during the battle. 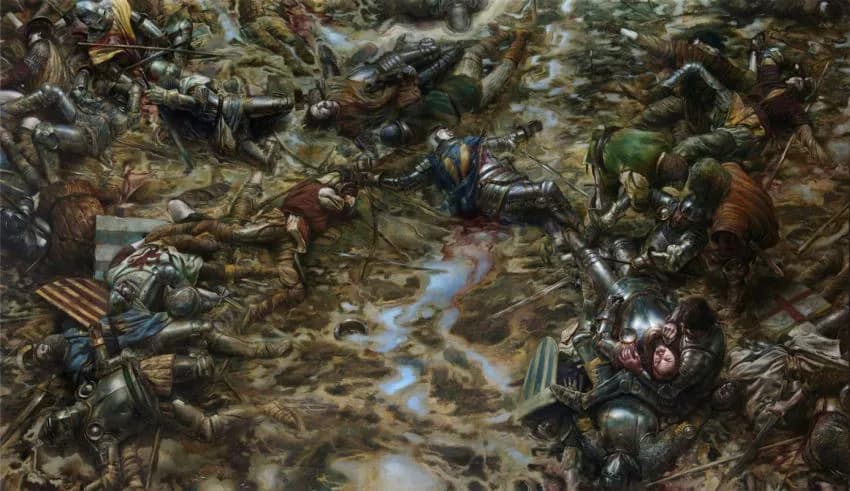 Pretty sure the absence of blood and skeletons is related to accessing the Chinese market as well.

I’m not really missing these as I think it adds visual clutter, but I think this is an important factor to take into account if they want to reach as much people as possible.

related to accessing the Chinese market as well.

No no no. Games on steam is not legally available in China as they are not approved by the government. It is just people can buy from Steam and the government doesn’t interfere (so far).

Just because the game has Chinese civ could prevent the game being formally approved, let alone blood.

As stated by many people already, it was an economic decision to make the game broadly available in most regions.

We can just mod blood and gore later so I really dont see much of a problem here.

’‘We want the game to be playable by as many people at as many age ranges as possible,so we intentionally avoid that to keep our rating towards the low end of Teen.’'

I honestly do not think that this means that a specific game is targeted towards either 12 year old or 40 years old. A good game is liked by any age category.

For example, the Legend of Zelda Breath of the Wild is loved by 10 year old as well as 30 year old.
Does that game have blood or gore? No, it does not and wouldn’t make any sense. Adding blood to that game wouldn’t fit with the franchise and both the 10 year old and the 30 year old wouldn’t respond well to it.

The AoE franchise also never needed blood in order to be successful.

I think kids and young teens are absolutely being targeted. I would have been awestruck by aoe4 when I was like 7-12.

The mini docs make great parent targeted marketing as well. They don’t care about the gameplay but if their kid wants to play it and they see it has some educational value there’s a good chance it ends up as their birthday or Christmas gift over competing games.

If they had the teens as a target audience, I can only say that they also attracted a few older guys like me.

I expect (hope would be more precise) to love this game as I loved the others. None so far as much as AOK, but so what. I had fun playing AOE3 and AOM even though they were not as good (for me) as AOK was (and AOE2 DE is).

Having fun is the purpose of a game, no? If AOE 4 is fun to play, it will be a success.

I really want to see the game do well! Ever since the closed betas 100% convinced me it could be kind of a new dawn for RTS.

Their marketing up until recently, though, was odd. No content was being shown. People who hadn’t played the betas were super skeptic (many still are). With the stress test, I decided to upload some gameplay to Youtube to try and spread the word. Here’s what the audience was, among about 100k views: 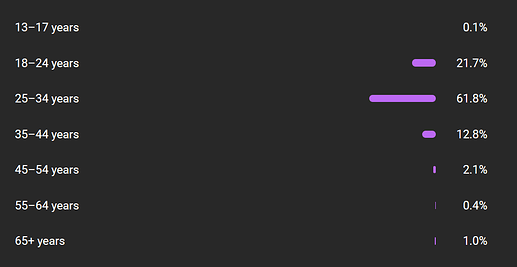 So, not scientific data by any means, but no kids yet, it seems.

I’d guess that the younger players are more likely to come in post release from gamepass and seeing streams and other content once it’s been released.

Or y’know, an update to the game that just has a blood toggle. We shouldn’t have to pay for that.

Age of empires 1: Series start point - good game indeed
Age of empires 2: Same mechanics than previous version, better graphics, more investors and lot of new features and better and fun features; 1+2 have the same fan group, because they have similar mechanics
Age of empires 3: Same world and action, but way different mechanics; fans does not like, BUT developers sees there are still lot of people who get interested to the game, but they game has no the previous fan-people to play with them and start the snowball.
Age of empires DE: Same mechanics than previous version in 1+2 and have the same fan groups gets interested, because they have similar mechanics. Developers want to earn money from the people who liked it on the Steam. Now they also check the both cards; Game with Aoe2 mechanics and game with Aoe3 mechanics, and which going to be better.
Now comes Age of empires 4: Designers want to create game to please the both; the people who are interested about aoe3, and for those who are already fans of aoe1&2 and now has also aged.

I have been playing the Aoe2 a lot, and tried Aoe3, but I’m not playing neither because i have more things to do here and there are no as much interesting games in the lobby and friend people to play with. I see the game play is whole different in old games and new games of this series, while they are in the same world and has completely the same idea and same candy-eye chivalry units to mess around with.

So my answer is it more like for the teens, because these new gamers are the next generation of gamers, and they grow with smart phones and next gen. game consoles and Apple devices. This is not the kids game, because on strategy games (or on any other game as well ) kids are playing on whole different skill-level while on playing with adults. I heard my friends who played Age of empires that the gameplay has too much “micro managing” with economy and army managing, so several friends turn to Aoe3 instead. People who grow with “doing” Age of empires or with any other rt-strategy game, they learn from it on each game more and they has aware of different tactics.

But the question is same like “You have read the first LoTR- book and has really enjoyed it: Now how did you like the movie’s trailer you have seen?”. Many people has seen the movie but they has not read the book; but on the other hand, everyone who read the book, watch the movie and feel like many things are now wrong.

So i would like to try the Aoe4 before buying it, but i feel so much feel for the game series i almost want to buy it anyway. I also may say it is not like the Aoe2 has been, but i don’t say it it could not be good a new kind of game or even better experience to play - with new people and with new game rules, in the same fun world with the same “core game”. 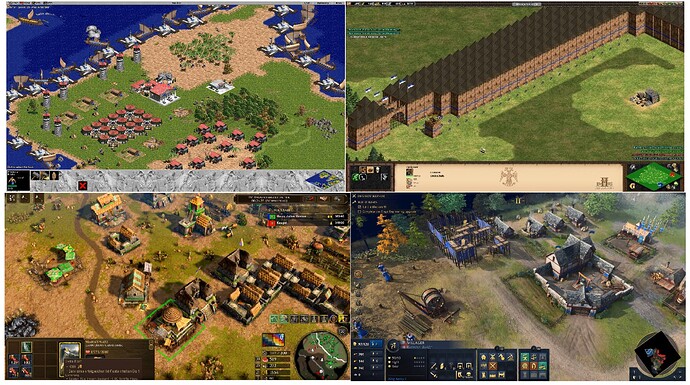 And what comes to skeletons and dead bodies, i just think with high amount those would destroy the most PC graphic cards and with high quality graphics all start look very brutal quick as fast as like wololo.

All that history about trebuchets, crossbow, Genghis Khan before he became leader of Mongul Empire, do you think kids and teens care about that?