In AOE2 having the high ground is clear advantage. Same in SC2. In both games choke points matter.

But in AOE4 the high ground advantage has been removed. Only choke points is left. Granted some forests hide troops (SC2 has a similar vision blocking feature).

But is there anything else in the terrain that influences battles? I like the map design of AOE4 but it seems the tactical importance of terrain is quite limited?

I would have sworn there were uphill bonuses for archers. (I think it increased attack range?)
I mean they tell you to place your archers on a hill in the tutorial.

Very curious to test that because no devs have commented on the issue.

The only terrain bonuses there is rn is the “vision blocking” mechanic on dens forest/high grass, in which you can hide units because of it now.

All uphill buffs were patched out after Beta afaik.
Age4, at least in the last stresstest that we played, is less highground focussed than Age1/2.

All uphill buffs were patched out after Beta afaik.

A lot of people were saying things didn’t work in the stress test that worked in the closed beta.
So im inclined to believe they just messed up somewhere.
It isn’t stated anywhere on the patch notes.

Think they confirmed on one of the recent streams questions that high ground bonus is LOS only and that they iterated and in the end they came to this solution.

You have choke points, stealth forests, the fact regular forests are blocking vision for scouts.

Its pretty frustrating that they don’t just have an update changelog we can look at.
But I guess they’re saving that for after release.

I found the stream: Im still a little unclear on what the highground advantage in this game is. We know for sure that high ground gives you a larger LOS, and lowground the opposite, but Ive also heard ZeroEmpires say a couple times in streams that there is a range bonus for ranged units as well.

A LOS bonus de facto becomes a range bonus since the uphill archers or towers can fire at max range and the downhill troops wont be able to see or target them.

Yea, it’s a scenario like this. There was just no way the guy could kill my treb.

Other than that, IDK.

Yeah this is kind of what I had wondered, I believe he just worded it poorly. 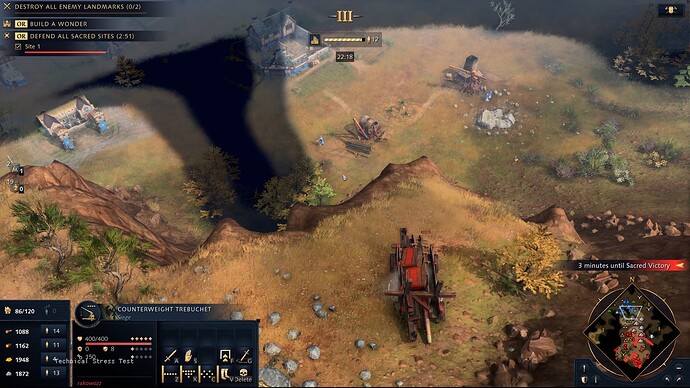 Interesting: You can see that the cliff does not block line of sight for the treb, but the forest downhill to the left does…although you should be able to look over it easily.
You have all the capabilities of a 3D engine but use a simple, flat grid system to implement LOS. Alright…

Was it done this way in CoH 1 and 2? I remember LOS being very important in those games, but no details on the implementation.

You have all the capabilities of a 3D engine but use a simple, flat grid system to implement LOS. Alright…

Well the alternative presumably would be every unit raycasting in every direction constantly to see what it can see, and that would TANK performance. To be fair, the grid system is exactly what is creating the LOS advantage for high ground, seeing over trees is probably an edge case that they hadnt considered, and would probably be very easy to implement with a height check.

If we had the scenario editor on launch we could test this all out in a few days. But alas, we must wait until they tell us or we test in a match.

Well the alternative presumably would be every unit raycasting in every direction constantly to see what it can see, and that would TANK performance.

would probably be very easy to implement with a height check.

But yeah, that’s why I’m curious how the CoH/DoW games did it (same engine).

There is a LOS advantage, but no range, attack, or defensive advantage.

The reason that the developers gave in one interview was that the random map would sometimes generate more favorable high terrain closer to one player versus the other.

I imagine in practice, though, high terrain offering better vision will still be important from a tactical vantage point. The trebuchet placement from @MinusKollege is a really good example.

I think speed/attack/defense bonuses would also make sense depending on how you orient your army formations, but likely this would create lots of headaches - especially for maps like King of the Hill that can feature pretty wild changes in terrain

There is nothing special about king of the hill map.

You got a desertic montain donut, whit gold in it.

You only need to mass build farm (they magicaly do not need maintenance cost) and sell food to get gold or use traders whit trading market.

Ignore the midle gold, not worth it. ( you will lose gold in villager movement and villager will die easely to obvious raid. It take time to get villager and easy to kill when alone or few.)

I found this hilarious because I watched a casted match where one player literally had more fish in their pond on Black Forest lol. But yeah I think height damage advantage would be a nice mechanic, though I think the LOS mechanic can create an interesting advantage as well.

villager will die easely to obvious raid. It take time to get villager and easy to kill when alone or few.

I mean this was true in AoE 2 as well, but you arent supposed to just send villagers to the middle unprotected, youre supposed to control the area, usually with a castle/keep. If you rely on selling food and your opponents controls the gold deposits in the middle, youre going to lose that race.

you arent supposed to just send villagers to the middle unprotected, youre supposed to control the area, usually with a castle/keep. If you rely on selling food and your opponents controls the gold deposits in the middle, youre going to lose that race.

I send a few archers for the villager, a few pikemen for cavalery and build ram on site, to destroy any of your buildings.

Maybe also use ram has a defence mobile wall, insted of pikemen. (The slow attack on siege weapon is ridiculous) XD

All the resouces you will waste to gather gold and the time needed to replace the death villager, i will be pumping food and cuting wood on my side.

The castle defence only work in end game, when you got canon in the castle.

Honestly I think they should at least give units a slight speed penalty when going uphill, maybe even slightly reducing their rate of fire.