The art style of this game

Yaah, they can mess around with lighting little bit. It is just too toned down.

I don’t think it looks like AoE but that’s not because it looks cartoony. The units are tiny and indistinguishable. The walls are ridiculously large.

I dont expect that they will listen. This is like Clash of Clans but for PC. Getting Castle Siege vibes. This is looking worse than AoE3/AoM. I remember how I felt when I first started AoE3 so excited, its gameplay was not as good as AoE2 but those graphics made it whole for me. This is just riding on the franchise fame.

Not sure a medieval game with big castles could look less like AoE:Castle Siege.

Your concern is understandable, but I don’t think this game is cartoony at all. I hope you change your mind once you see more screenshots and gameplay. Watch the trailer over and over. The color scheme, object scaling and reflection can improve many concerns we all have. Trust me, I hate cartoony graphics more than you do, even made a lot of memes and trolled the guys at twitter. I hated Civ6, and I played every Civ (including the spinoffs). This is NOT cartoony, I looked every frame of trailer, this is doing eyes trick for many of us.

Maybe so because I really like this franchise have spent literally days playing it. Too many colors are being used that is why it is looking cartoonish. I think my emotions got better of me, the animations are slick. Still, these are very early stages “pre-alpha”. For me, depth of gameplay is more important than graphics but if Relic is not taking this seriously it may end up sub-par in all areas. I will still keep my stance because a little pressure on them to do better is a good thing.

Yeah, it happens. I had that happen when I was hyped of Civ6. If they do their moba trick with this game, then, oh boy…I will march with fork and torches with everyone.

It’s a pre-alpha so we can’t judge it as it is right now. However, if they’re going with this stylized graphics I’m gonna be very dissapointed as I don’t like it, I always prefer realistic artstyle.

Can it be renamed “AOE2 Plus”? Don’t destroy the spirit of Ensemble Studios.

Why don’t Microsoft let Relic do they good at?

In my opinion they need make a little darker to reduce the cartonish look from it:

Good Idea, but still a bit to cartoonish imo. But I guess there will be a lot of change until Beta.

In the first second after the trailer I was a bit disappointed but maybe it’s just becouse I really didn’t expected something like this.

This is a big mess, omg.
Settlers meets aoe. 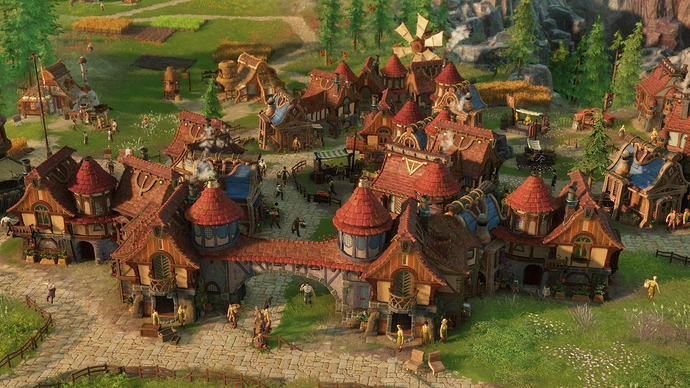 I’m not going into a doom spiral over it yet, as it is still really too early to say much…but yeah, I’m not fully sold on the aesthetic from the trailer.

In general, the trailer hasn’t done too much to grab attention. Really, the biggest thing of note was the fact that you can now put soldiers on walls, which, granted, is something I really like. I just wish we’d have more information on the actual game itself. How does aging up work? What ages specifically will be covered, just medieval, or antiquity up to Imperial? How does unit control work?

Hopefully we will learn more in the next month or so. Until then, super happy to have AOE 2 DE at least!

And units are not much detailed 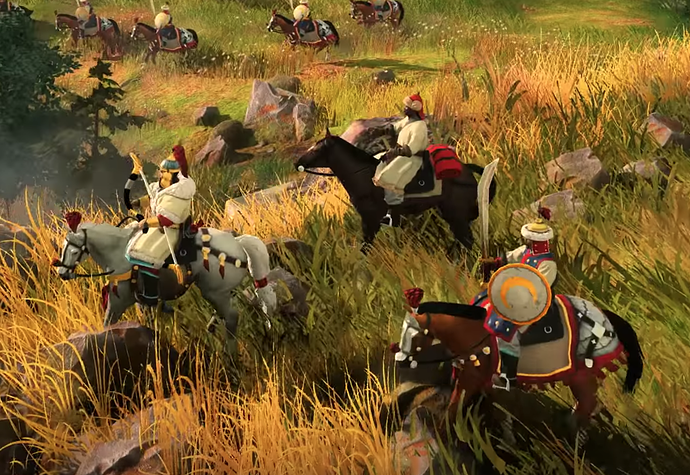 No much pixel on them
Relic have to improve it. For now this game Is quite far from the quality of engine seen in Company of Heroes 2. Don’t like It.

I was also expecting something very different. I didn’t like it. Too cartoony.

It didn’t have the same impact on me as when I saw the first images of AOE 3 (despite the game itself was a disappointment). That one really looked like an evolution. This one looks kinda a cellphone game, with more resources.

you can’t define it: “it looks like a mobile game”. What did we actually see? the graphic aspect. Now, just the look and feel: the colors are very bright, but it’s not a carton graphic. AoEonline has a carton-like graphic. This video is in pre-alpha … I think it’s still too early to judge …

Improve this and will change my words.

It’s too stylized. They have to improve it.
I mean, speelforce3 Is more realistic and detailed than Aoe4

My thoughts on what constitues the AOE vibe, which I mostly cannot find in the trailer.

If the thinking behind the art style was to appeal to a younger audience, look at it like this: as a kid you can have a lot of fun with a plastic sword, but a metal one is the real deal. You play with the plastic one because you have to, but you’d far rather have a real metal one. A toy plane can be a lot of fun, but a realistic model plane fascinates you, you get lost its details, its realism, it captures your imagination more than a toy could ever do.

For me the AOE series always had the intention to be more of the real deal. Spellforce 3 is actually a good example of what I would thought what an Age of Empires would look like. It has this realistic detail and prettiness. It gives me the feeling that I have a real world in front of me, which I can play in, which I find fascinating.