The biggest problem with ranked seasons

To me, the Rocket League approach is much better. Over half of players are platinum or higher, which is going to make people feel a lot better about themselves than being the lowest rank in a game. It’s more of a bell curve shape whereas the AoE 4 ranks are biased towards the bottom. It just makes more sense to me that average players should be in the middle rather than at the bottom, and that the extreme ranks should be rare, both at the top and bottom. I think a rank distribution more like the Rocket League one would make more players engage with ranked play in AoE 4.

I feel like the rank distribution is the biggest problem with ranked seasons in AoE 4, but I’ll just note the following as things that I also see as problems:

Using the rank at the end of the season also seems problematic to me, Rocket League has a ratchet mechanism that rewards playing a decent number of ranked games in a season, but means that once you have the rewards, you don’t need to stop playing for fear of losing them.

The fact that you can’t get ranked rewards from team play in AoE 4 also seems like a problem, though there are certainly plenty of problems with developing a rating system for team play that works well. You can have people creating alt accounts to boost people to higher rewards in team modes, but people can pay someone to log into their account in 1v1 too, so that sort of cheating isn’t exclusive to team modes.

Totally agree. What is also a problem i think. In the low ranks you can win 1 game and you already switch tears. Of course they can be more narrowed than the upper ranks but this does not feel right.

i like to play ranked, but i dońt have to much time. a downer for me is actually the rewards for gold, platin and the top ranks. every game i fear to loose my rank and rewards and that has make me stop playing it.

please give every player the same rewards just for playing rank(with different colors maybe for the ranks), so you keep people on playing it but dont destroy the fun with the fear of loosing a rank.

You name the problem of the kids these days.
They expect rewards for being there, being awesome, while in fact they suck, and being rewarded for being lazy and scared for challenges.

You fear to play because you might loos your rank?

I have some news for you…
You already lost.

By not playing and getting better over time, your fear has beaten you.
You won’t ever become better at something by not practising and just demanding the rewards instead of playing, loosing, learning, adapting, winning, loosing, improving.

This here goes up for everything in live.

It’s not only about fear. Seasonal content and rewards are big pain for players like me, who just really dont have time to grind 6+ hours a day ladder to reach certain rank within 3 months. It doesn’t matter how good you are, if you don’t have time to grind&practice you get nothing, other than the place where you landed.

So I will continue from other thread seasonal rewards are bad design and games should not have time limited content that is unobtainable once you miss the window where it was current content.

Ultimately ranked is not supposed to be about rewards, but yet this whole problem is created by ranked giving players rewards. Removing rewards from ranked would solve all these threads. As finally only people who want to play in another queue that is just rebranded quick match will care about it and play it. But currently game is creating conflict between players between groups that are not supposed to interact with each other and yet they are forced to interact as they have conflicting interest.

I don’t have time to practice football 12 hours a day to become one of the best players in the Champions League.

I don’t think it is fair that only the people who made a living from it, or are born with talent, have the change to win the trophy.

I demand a participation trophy from the champions league!!!

Only if you are going to attack with normal sports, they dont give you unique cosmetic that you would be able to use in following games. You only get medal/trophy etc, which is left forever on a shelf as memory and nothing more. What we are talking here is about cosmetic items you use in every game, and thats IMO big difference.

So again its not same and your comment just makes you sound like another player that demands to be a special snowflake. So you just want to keep cosmetic content locked from players, because they dont have same amount of time and skill as you and all other special snowflakes.

yeah you are right, but you miss my point.
it´s all about motivation. i dońt care if i am win or loose (at all i dońt play that bad :D), but i play for fun and cańt play 10 games a day ( i am not a student or schoolkid).
the reward of a higher rank with its logo is reward enough for playing awesome.
the fact, that most players will never recieve any of the statues for the towncenter is frustrating and so there is it: the questions about motivation for playing rank, if am not a 10-games-a-day-player. why should i play rank, if i am not able to recieve something? so i can play other modes with friends… thats why i stopped by reaching some rank with the statue.

the rankladder could have much more potential and players with a motivationsystem that rewards for beeing a part of it and not punish you for not having so much time.

Well noone said it should not be hard to get to the upper tears. It should be. But in my view it should not be like the biggest part of the player base is in the lowest tier. Also the low tiers are too narrow. Starting with gold it feels more like it should be. You need to win or loose at least 2-3 games to change the sub-tier and not change after every win or lose.

The fact stays that most of the games have another distribution. I think the current distribution is not good nor healthy for ranked season.

I do get your point, and i’m the same type of casual player as you, with a job (2) and with the time to play several ranked matches a week. (Nothing crazy).

But not playing in fear of loosing out on something which you won’t care about in 2 years from now is not good.

The reason; if you don’t practise on ranked for the next 2 months, you will be in the same position again in season 2, instead of having the developed skills from season 1 and smile on gold in season 2 while reaching out for platinum.

Just go for it!

I think we can all agree on one thing…

The ranked distribution is too low. 50% in bronze, 25% in silver is just crazy. In my opinion they should kick everyone up a league.
Bronze should have 10-15%, silver and gold the majority, 50-60 %, where platinum becomes very competetive for the casuals.

What you think of this idea?

Specially for you, because you completely missed it:

the reward of a higher rank with its logo is reward enough for playing awesome.

lol
no rewards is fine for noobs.

Bronze should have 10-15%, silver and gold the majority, 50-60 %, where platinum becomes very competetive for the casuals.

and the main point of that distribution - better balance.
you can not balance within Bronze 51%, too much skill difference

yes, your arguments are good, i maybe will try some more matches soon.
yeah its maybe my oldschool-gaming-attitude, that i wanna own 100% of a game -including this kind of rewards. but yes, somehow this cosmetics is indeed something you don´t care about very soon. 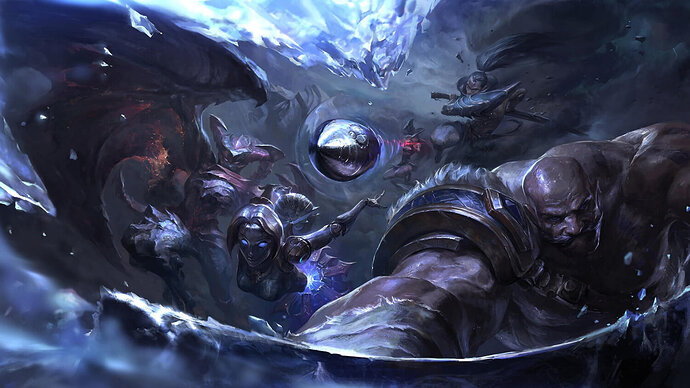 The rank distribution and percentage of players by tier in League of Legends. The entire player base in all regions is considered. Only solo queue data.

In serious competitive games, 65-70% of the players (or more) are in the lower leagues.

That they give you the rank is something absurd and I hope it does not apply here.

P.S: In some games that have been around for many years, it can happen that the level goes up and there are more people of average levels, but only with time.

In serious competitive games, 65-70% of the players (or more) are in the lower leagues.

That’s another example of one that isn’t like AoE 4. Pasting the %s here:

There is a bit of a difference between Aoe 4 and LoL/Rocket league.

LoL and Rocket league are team games. In team games it’s normal for the distribution to form differently.

sc2 is the team game [sarcasm] 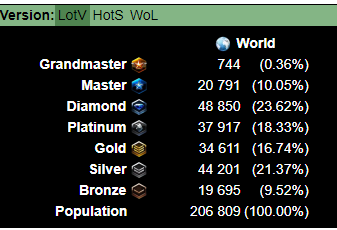 I’m in favour of leting the distribution settle for a few seasons before changing something.

How is this thread still alive?

So many comments without a single reasonable point or some value.

Just play gut and climb the ranks. Thats what is is about. If more than 50% players are in low ranks than yes.

It is as it should be. RTS games are the hardest one. And better than bronze player should beat his opponents in bronze easily on daily basis and THUS climb the ladder.

Rather not even commenting on your complains about rewards. So pointless … Completely.

Oh and yes for a love of God stop posting some statistics from games like LoL or SC … This is AGE OF EMPIRES.