Sigh…i really didn’t want to do this, but i should. 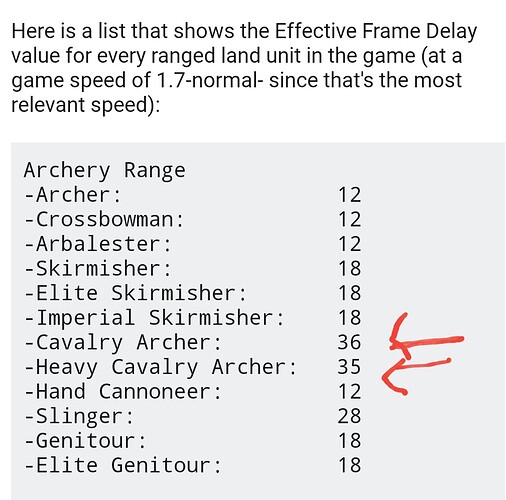 As you see in this pic, all archery range units with thier frame delay, and yes the CA have the longest frame delay.
What is CA? CA is that unit that should work as"hit and run" tactic, but what is the problem?! The problem simply is that that they didn’t “hit and run”, so what are they doing? They HIT AND DIE, yes just like that.
For a unit that should play a major rule in “hit and run” tactic, it is completely trash and weak, so what should we do?! The xbow has a 0.5 frame delay, and Mangudai 0.5 too.

My suggestion:
-Decrease the frame delay to 0.8 for CA and 0.7 for HCA
-Decrease their training time, this unit take 34s to create, and this is so long time, so make it 28s or 30s.
-Increase the accuracy
-Decrease the reload time

With all these fixes the CA should be fine

Reload time and training time are fine. As is base accuracy. Thumb ring brings it to 100%.

Decrease the frame delay to 20 or 22 max 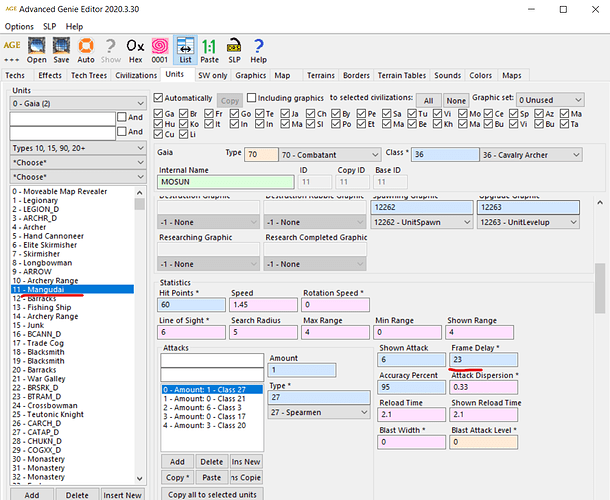 Less than Mangudai? Hell no dude

Frame delay values in AGE mean very little, because the actual in-game frame delay also depends on another hidden parameter. Mangudai effectively have 18 frame delay. I think it’s more productive to discuss it in terms of seconds. Xbows have fire delay of 0.35s, Mangudai - 0.5s, CA - 1.0s, Arambai - 0.6s etc.
I don’t think CA fire delay should go any lower than 0.8s, because they have the potential to become OP, as they can outrun heavy cav and eagles, and also do significantly more damage against common archer counters such as mangos and skirms.

I did expect a fix this patch, but they didn’t touch it. Honestly they nerfed CA going into DE, and they havent fixed them in a year. I think the current state of CA is how the developers want them

I don’t think CA fire delay should go any lower than 0.8s

Should be 0.75s, 50% higher than Mangudai (and now Kipchak). I believe that’s what they used to be back in HD.

That was proven to be incorrect

As you see in this pic, all archery range units with thier frame delay, and yes the CA have the longest frame delay.

Just to be curious, how much was in HD?

Trianing time is really high, 34s is so much, same for reload

I’m not pulling stuff out of my back dude

Yeah, even @TriRem confirmed it back then

I feel like that even further reinforces what I’m saying, ultimately CA appear to be in a state that the devs want to see them in, if they didn’t change them at all coming into DE and haven’t changed them in any of the multiple updates in this past year.

Actually i don’t know about HD but everyone said they were better in HD. Well they were or not, but the major problem for now is their frame delay

ing time is really high, 34s is so much, same for relo

Training time is fairly reasonable. Xbows train in 27s, and they are weaker per unit. Besides, there isn’t such thing as “there is that very particular issue with this unit, and the only reason why it’s bad”. The unit performs well or poorly based on the combination of stats, hence there are many ways to buff CA, including frame delay, attack rate, damage, range, accuracy, health, cost, as well as any combination of those. So there isn’t a definitive answer on how they should be buffed. They might as well give them extra pirce armor if it’s somehow better.

Actually i don’t know about HD but everyone said they were better in HD. Well they were or not, but the major problem for now is their frame delay

People are also saying that HC have long frame delay, and this isn’t the case, don’t trust people.

I just tested it side by side with HD and DE and I honestly didn’t feel a difference in microing them. The frame delay is the same.
I think people mistake them for crossbows and then wonder why they always cancel the animation.

To be honest i don’t think HC (Hand cannons) need anything, i find them fine

Someone say cavalry archer? (sticks head out of gopher hole)

For me i only want two things

If that still isn’t enough then reduce effective frame delay to 0.8sec

Im still convinced the biggest issue with microing CA is that retarded stutter resulting in potential of 3sec+ delay.