The new built-in range indicators released in the current patch do not accurately reflect the range of larger buildings since they do not take the building’s width into account. The indicators are always circles, even though the actual range is a rounded rectangle.

This is always present.

The true range of a building is represented by a rounded rectangle shape. This is what it looks like in the Age of Mandala mods, of which I’m sure you are aware.

This unit is outside of the range indicator but is being shot by the castle. 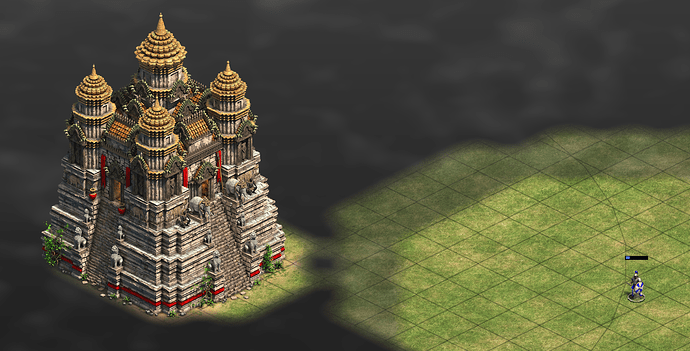 While this unit is inside of the range indicator but cannot be hit by the castle (he took some shots while getting into position, though). 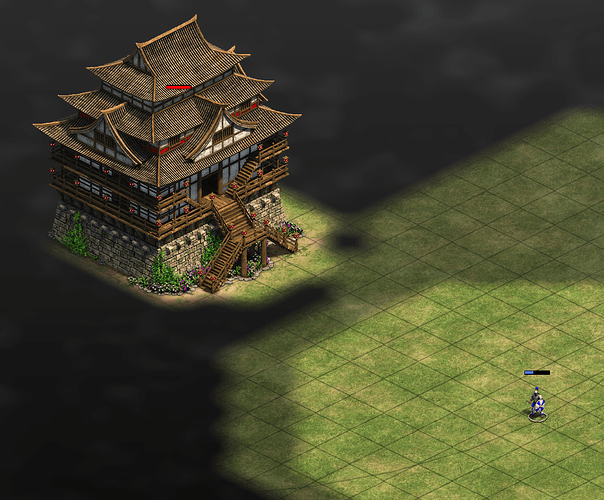 Notice how in the original Age of Mandala mod, the range is a rounded rectangle, reflecting the true arrow range of the town center in this case. 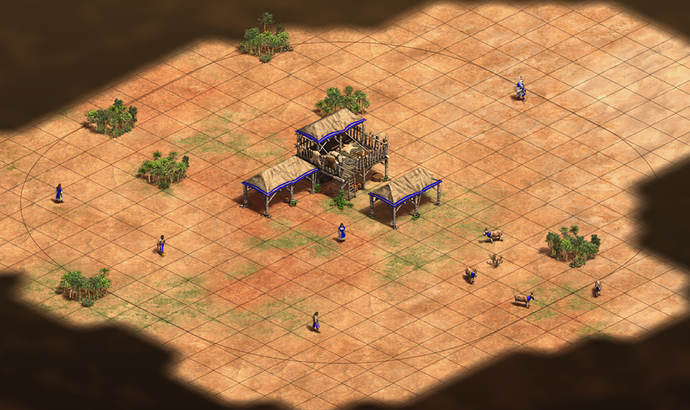 I would like to mention that our modding community works without pay and out of pure love of the game. While I am glad that the best ideas from the community are being integrated into the stock game, I hope the developers can demonstrate their appreciation for the mods they’re replicating by getting the details right.

How come modders are better at this than full time paid professional developers? Lol 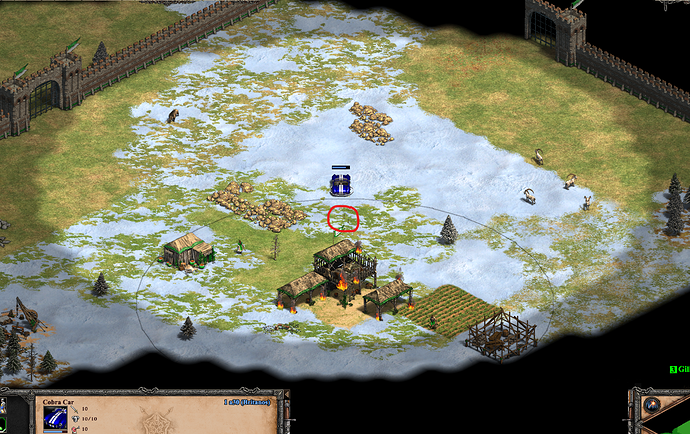 I hope the developers can demonstrate their appreciation for the mods they’re replicating by getting the details right.

While you are rigth with your conclusion that this is just bad appreciation, I think the way bigger and worse point this shows is: The devs working on this game do not have any clue how the game works at all. I remember there was a bug report about mayan unique tech skirms garrisoned in towers would not add the intended extra arrows, because of their secundary projectile (because of whatever reason units with extra arrows (like chu ku nus, kipchak, mayan skirm) dont add extra arrows. The guy in his bug report mentioned this is like this since forever and its bc of the extra arrow the unit provides. Guess what? One of the devs replied that they didnt know this…

Well, there is a clear difference between

do not have any clue how the game works at all

and not knowing one very specific mechanic. Some developers will be new, and even seasoned aoe2 moders are allowed to not know some specific detail.

A developer needs to have a general overview of the project and its architecture, and needs to know specifics of the parts he focuses on. He isn’t expected to know any detail, when asked on a whim. It would be good, if he knew where to find the detail though (that’s more about code/project organization, than individual dev knowledge).

Well, there is a clear difference between

do not have any clue how the game works at all

and not knowing one very specific mechanic. Some developers will be new, and even seasoned aoe2 moders are allowed to not know some specific detail.

While I agree that not everyone on the team has to know everything, I have to point out that software development is always a big team effort. So if at least ONE person in the whole team that has contributed a bit of code to that mechanic would have checked out the correct, and unofficial Age of mandala mod, that one person would have realised: “ohh damn, they dont use circles, why would they not use circles?”

And the other point is: imagine you get the task of introducing a official way to show ranges of stone defences better, what would be the first thing you do?
a) draw a circle
b) try to find out how it is calculated if a unit is in range of a castle or not
c) look at existent solution and try to reproduce it

Now lets assume you choose to go with a):
You draw a circle around the castle, just from the middle of it with a radius of 8. You are a really good developer who tests what he does and you get surprised. Why? Yeah because your circle is waaay too small, since the castle has a 4x4 foundation you decide to go with a radius of 10 (8 base range+half time the size of foundation) (+whatever upgrades the player has). This is the exact moment when every bell in your head has to ring… something is off, maybe range is not as easy as intended, maybe some more research has to be done.

needs to know specifics of the parts he focuses on

Yes exactly, where was the guy who knows about the game mechanics?

It would be good, if he knew where to find the detail though

I could not agree more on that. Since any IDE nowadays has the possibility to jump the code to whereever that specific method is declared/defined this shouldnt take too long. But iirc at some point it was said that they lost the original code of the genie engine, but only had the compiled program left. I can not imagine what genius though it would be a good idea to republish a game for the third time when you dont have the source of the engine…

It just shows there is no QA involved. Someone even pointed out he reported that issue in the prerelease phase. If it does not get pushed back after such a report you can just cancel the prerelease thing. Link to the guy who reported the wrong behaviour in PUP Forum: Range indicator is a disaster

imho it is fine if it looks ugly, thats one thing you will never satisfy everyone, but the other thing is: the shown information is wrong, its close to the correct information, but still wrong…

Link to the guy who reported the wrong behaviour in PUP Forum: Range indicator is a disaster

OK at least they replied now, on the May PUP forum

where did you get the info that they lost the source code for the engine? coz it sounds rediculous. you wanna tell me they are just patching a binary file at this point? this doesnt make any sense.

I didn’t realize this was pointed out during PUP. And the developers just pushed it anyway? So participating in PUP - putting up with a slightly broken game in the hopes of making it better for everyone - is just a waste of time? FFS.

And the developers just pushed it anyway

Yes. This is literally what I told them before they pushed it:

The range indicators are still broken for towers at least.
Didnt look into castles nor krepost nor donjon.
@ChristheCo is this tracked?

Please fix it, or remove the range indication.

Now there is no plan to change the range indicators, thanks for understanding.

Now there is no plan to change the range indicators

So if there is no such plan… is the plan to have it in a wrong manner in the game or will the range calculation be changed to fit the shown circles?

Now there is no plan to change the range indicators, thanks for understanding.

This is ridiculous. The range indication shows a wrong range and you want to leave it as it is.

edit:If you figure out, that the indication is wrong, you should just toggle it off until it’s fixed.