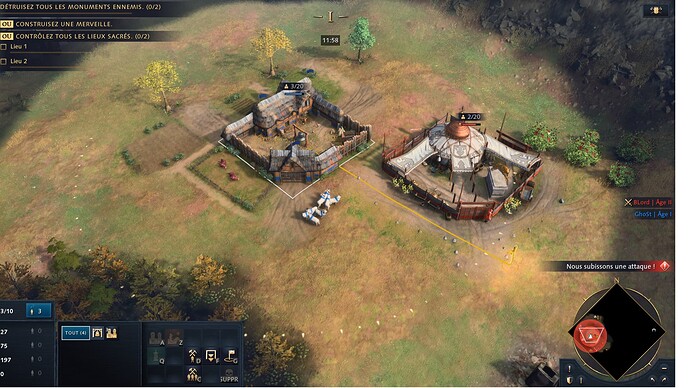 60€ for this ! Thank you Microsoft! Please do something!

And ban cheaters. There isn’t even a way to report them…

You create an account and your first thread is this. This is so helpful. On the other hand this is not related with game price.

So you can’t have an opinion if your account is new? His post is bad though as is your argument.

His first message is rant than nothing. Also o dont think he writes new messages.

Why do you care if it’s his first, second, 21st message? An opinion is an opinion. Good or bad. AOE4 is a new game. Of course there are new people coming.

I play aoe for 20years. It is my first thread because i usually don’t post on forums but this is unacceptable. The game has not been tested and balanced properly. It needed 3 more months at least. The multiplayer experience is poor, so it doesnt worth 60€ at the moment (not to mention that there is no ladder and no custom shortcut).

Get a refund. They need to fix a broken game, and you should expect more.

I could do that but I already played too much and it’s not really something i like to do. I’d rather like they fix the game quickly. If nobody complains they won’t.

isn’t mongol TC as strong as your own one meaning you have advantage with more attack time and more vills(aka you can kill their tc , tc cannot retarget meaning units do fine too). currently mongol upgrade gives more speed for wagon than is supposed to so opponent can come sooner but other than that there is nothing wrong with this as it is. This isn’t cheating. Also when wagon upgrade speed is fixed it’s should fade away as TC won’t move enough fast to compensate lost vill prouction and gives more time to get military + tc foundation will be easier to block.

LOL HAHAHA , this is the new meta it seems , but hey honestly what are you doing in dark age this late ! it has been 11 minutes and you have not went to feudal? and whitout military or towers lol

this is wrong , this is not a bug , this is the new meta , and you can easly defend your self with 4 villagers , one scout and one tower . the thing is that this guy was in dark age 11 minutes , instead of going feudal age in minute 7 or 6 .

do you know what the frick is a “meta”? , all games have a weak point on balance that makes something really OP , and i agree that they can patch this .

The game has not been tested and balanced properly

wrong. the balance team made so many change from closed beta to retail version , they did a great job .

The multiplayer experience is poor, so it doesnt worth 60€ at the moment

the multiplayer is not the core part of the game lmao , your post really shows or at least makes me think that you are just frustrated because they wreked you with this technique 2 or 3 times.

No cheats in the MP game man xD

In the original Age of Empires 2 the Teutone Town Centres had a range bonus. Town Centres also didn’t cost stone.

Back than players had to wait a year until the Expansion for this Exploit to be fixed.

Also the game was more expensive if you adjust it by inflation.

Sure I remember and I agree with you. But that’s why they need to fix this exploit quick and surely not wait a whole year !!! Competitive multiplayer isn’t viable at the moment and obviously the balance team didn’t do “a great job”.

Who can test the balance without a large playerbase?

I don’t think this is cheating. It should be easier to counter, perhaps.

This one thing is unavoidable, any new multiplayer game will have cheese that no one though about before the release and will get fixed with time.
perhaps their reaction time to this balance issue should be faster but that’s about it.

starcraft 2 balance had issues even when expansions released with a few new units (swarm hosts and widow mines anyone?)

And ban cheaters. There isn’t even a way to report them…

Mongol players that do this aren’t cheaters tho lol.
In every RTS game there will be weird cheese strats that exist because of the complexity that RTS games have.

Sure the devs might nerf this OR the community will find a way to deal with it.

There is a similar strat in Aoe 2 where the persian player drops their TC next to yours and just wins because it has 2x the HP.