Three reasons why the aoe4 UI is simply overwhelmingly good! 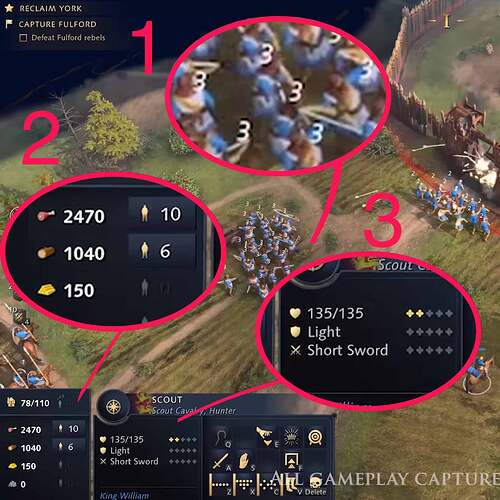 1 Finally I am no longer confused about which hotkey to use.

2 Extremely clean and clear presentation of all necessary
resources and population.

3 I finally can get a quick assessment of the values of my unit
with the help of a five star rating system.
(in this case a scout). Simple and genius.

all it’s needs is a personalization like in aoe2 UI

The screenshot of the English villager UI also shows buildings split up by age and each building has a count of the number you own in the top left. 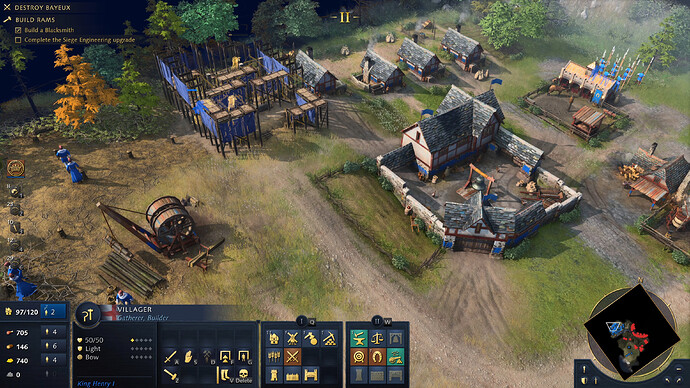 Definitely a user friendly and informative GUI, though the design is too sterile and the colour scheme reminds me of business applications. Doesn’t fit the art style of the game in my opinion.

I’d ease off on the dark blue and all those sharp edges. The iconography is good though.

As a competitive AOE 2 player, Yes, I really like the “1” as it could allow me to control units in a much more advanced way to overcome my competitors in too many ways with organized control over my units

Definitely a user friendly and informative GUI, though the design is too sterile and the colour scheme reminds me of business applications. Doesn’t fit the art style of the game in my opinion.

100% agree. Does not catch the spirit of Age of Empires although it does look very practical.
Looks like they took it from somewhere else and put it here, its uninteresting. Where are all those small details that the old good devs used to put in such things?

AoE 2 much better UI - and still the best

Specially for Resources and total of pop in the top, Also for villagers

But missing for hotkeys

I have noticed the total of all villagers not available in AoE 4
Only available for resources and sleeping, but not for all

Nap, may be it offers good information but visualy it just fell off, all RTS from 1997 to 2010 have their own UI, showing may be colors of the era, some symbols, for example in dow1, each race has it own UI, all I see is lazynes, it looks generic.

You can have all this utility with a hand drawn UI like the rest of the franchise. You’re defending the UI’s shape, not its aesthetic. We’re complaining about its aesthetic.

I like that all buildings will be seen without having to use a button to get to more list.

I also have seen some icons above the resources one was a feather and scroll, and something else from china, so may be part of the civ bonuses.

agreed it does not fit into the age of empires aesthetic.

Agree. Just cool. I myself am looking forward to the Age of Empires 4.

I like that all buildings will be seen without having to use a button to get to more list.

just comparing it to AOE2… AOE3 may be the only game I ever need to play if they don’t get AOE4 right, as its nearly a masterpiece

3 I finally can get a quick assessment of the values of my unit
with the help of a five star rating system.
(in this case a scout). Simple and genius.

I legitimately can’t tell if you are being sarcastic. What information does a 2 out of 5 rating in the top row and 0 out of 5 ratings on the bottom rows convey to you exactly?

To be fair, a lot of the bonus damage and bonus damage resistance that factors into AOE2 combat isn’t explicitly shown in-game. Maybe the OP thinks that, so long as selecting units doesn’t give the whole picture, it ought to cut out the clutter and just give very basic overviews. The stars don’t give precise information, but they would allow you to quickly gauge relative unit strengths.
If the game is meant to include younger and newer players (which the removal of blood/skeletons suggests), then the decision makes some sense.

Personally, I’d prefer to have more detail, too, but I could live with this UI. I just hope that they give the option to toggle more advanced unit descriptions, and actually, that reflects my perspective on the UI more generally. As long as there are customization options for different types of players, I’m not too worried about it.

On another note, it’s interesting that pierce and normal/melee armor are not distinguished in the image. On some level, I guess it makes sense that a heavily armored unit would be protected against all attacks, but I’m somewhat concerned about how this affects the counter system we’re used to from previous installments. Maybe that’s just information that’s hidden by the basic presentation of unit information, though… or maybe heavily armored units always move slower, so they become more susceptible to ranged units because of lack of mobility, rather than low pierce armor?

In my experience with the more modern AoE games, the UI in AoE4 as displayed in the image is absolutely horrible. It’s worse than anything in the franchise, let alone the clarity of the later titles.

I agree that the UI is good. It is one of the things they got right. Very clean, yet informative.

I can’t help not notice, though, the lack of 2 types of armor, normal and piercing. Seems to be only one now. And I hope it displays the range for ranged units.

They should also display the exact attack number of a selected unit though.

Your second point is interesting. I initially thought it was just an odd design choice, but maybe it has to do with the player’s ability to rotate the camera 360 degrees? It looks like the square is slightly tilted with respect to the circle.

Would be nice to have an option to switch to a medieval look
But im not even mad about the UI, only the cartoon graphics turn me and most of the people off