Towers and keeps not firing

I have noticed that wall towers and keeps do not fire. I have encountered this several times in many different games.

Thanks @SonorousEel974! Could you be more specific on when you are seeing this? Campaign, skirmish, MP? With only particular civs? All towers and keeps? Upgraded/not? Etc.

Does happen but unsure of exact triggering method for keeps and outposts failing to fire.

Player 1 Cannon emplacement on outpost and villagers/knights stand ground nearby.
Player 2 Clump of men at arms.

At some point the Outpost stops firing and won’t shoot again. Not sure if it is the building trying to target a torch thrower that dies to an AoE effect, or if there is a specific timing for the torch thrower that breaks the outpost.

Both HRE and English outposts were able to get stuck this way into not firing. We had the best luck with a wonder for high HP in testing to get different torching timings for the outpost to just stop attacking.

Other things discovered in testing:
Noticed Keeps on HRE side only firing one arrow out at a time instead of the expected 3 arrows, scouts and burning triggers, not sure on specific triggers to stop shooting.

Got a keep filled with scouts to not fire the 16 added garrison shots, lots of emplacement related bugs, and not clear on what exactly is causing it other than repeatable with the spam clicks by both players, ~10 different keeps, taking about 20 seconds to get the weird no-firing state to happen. Only able to tell after ~6 seconds of no more cannon sound. 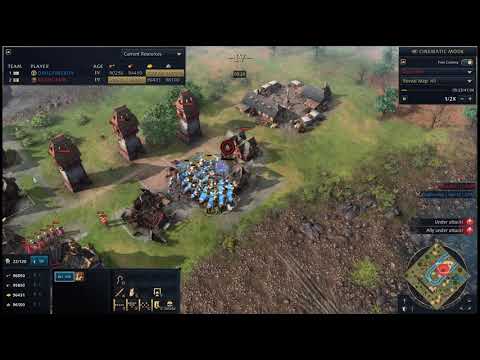 Thank you @DIRazmuffin! I appreciate the extra detail. I’ll get this over to the team to checkout.

I think the bug is when towers and keeps take damage they stop firing. I have seen this first hand, I have had this happen in all types of games, not sure if it is when they take damage or after repairing them but is is one or the other. It makes building defenses useless.

Just happened to me in a game HRE vs French. I was defending with two towers and all of a sudden both stopped shooting balistas. It cost me the game! It might have been related to the HRE repair ability? It seemed to happen after I used that.

Thanks…we’re still watching this one!

This keeps happened to me. I think it may be related to when units are garrisoned inside the keep, (which changes the fire rate) and then they leave. Therefore it recalculates based on no units garrisoned and thinks there is no attack. It’s particularly annoying as the cannon etc. also stops firing.

Would be great to have this fixed.

The HRE Keep does not fire its arrows from the 3 Arrowslits nor the garrisoned arrows.
Also, very strangely, it appears to be firing 2 springalds from the Keep, even though Keeps can only have 1 springald emplacement.

I’m also having this issue. I’ve mainly noticed it while playing against AI. Random towers, outposts, and keeps sometimes will eventually stop firing, and need to be deleted and replaced to fix it. It doesn’t seem to matter what civilization I’m playing. For example, the other night while playing as the Rus, my Spasskaya Tower randomly stopped firing it’s springald and cannon emplacements and was left with only arrows. This was a problem because it can’t be deleted and replaced. I have no idea what triggers it. It just seems to happen only after I’ve been playing a little while (30+ minutes).

This is happening to me too. Any defensive structure with the ability to fire a springald or a cannon will stop firing once it takes damage. Even if the damage is repaired, it will never fire again. Hot oil attacks are unaffected, and archers within the defensive structure are still able to fire. It makes keeps and towers largely useless after the enemy’s first major attack.

Hi any update on a fix for the towers and keeps not firing after taking damage ? This has been going on for over 3 months now, would love to build some defenses that are actually worth it. Thanks

I have no helpful update. There are a couple tricky bugs at play here…we are definitely working on it, though!

Glad to hear it guys. Keep up the work dont worry even if we sound like bitching ******** we stand behind you!

I think I found a bug and its VERY annoying! Please help.

I build a wall across the gap in the mountains. I place towers on these walls. I build castles behind the walls and load them with relics. The towers and castles all shoot for a while (10/20 mins). Then they stop. Such that enemy units will pass in front of the towers and not get shot, either by the castles or the towers. Happens in any map type, any rules. Its as though they run out of ammo! Seems to happen sooner if I pause the game after building the defences.

This makes building defences a waste of time and resources.

Hopefully something can be done.

Thank you for some extra context @Bayowulph3364! We are definitely looking into this.

Hey congrats on launching the season 1 update. I read through but didn’t see any mention of fixing this bug. Has any progress been made on it? If not, do you have any tips on how we can protect our defensive emplacements against being deactivated? There must be some sort of catalyst that we can try to avoid triggering…

No fix has been implemented yet…it’s a tricky one. Unfortunately no tips to avoid, but please do continue to report if you see it! The more detail the better.