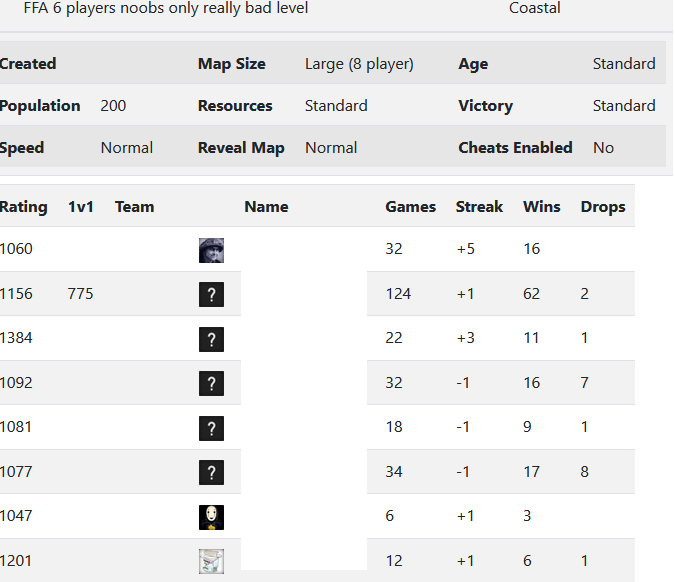 Thanks to Yorok0 ive been able to check ELO ratings of players in unranked servers… look what we have here , a player with 124 mulitplayer matches joins a server “noobs only really bad level”

what is wrong with this MP community that someone needs to troll such an obviously low level server? do people so desperately need wins that they hunt for noob servers?

we really need more info IN GAME, of the players in servers… 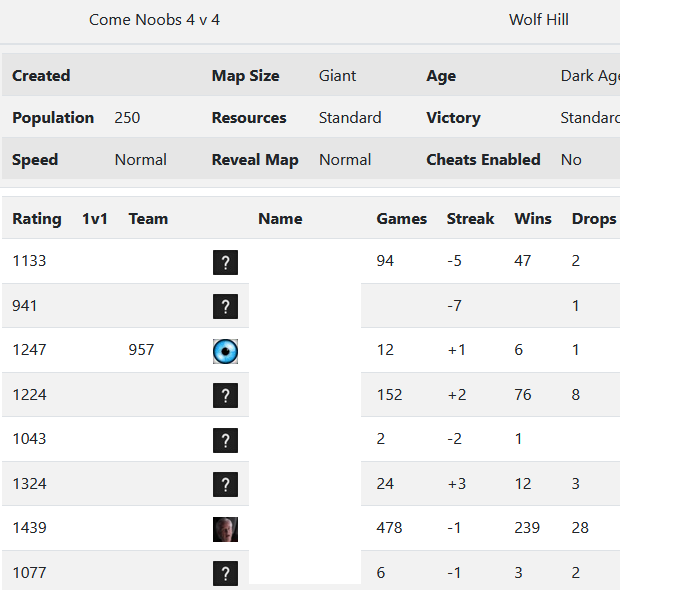 and it gets worse

thank ill edit em… but they deserve the harassment, they dealing it out themselves

they’re literally doing what they do thanks to their anonymity

I guess as a workaround, whenever you look for a game you leave your Steam browser opened with AoE.net and whenever you enter a loby you don’t ready up before checking, and you can even post the link so that everyone can look by themselves

yeah will do thanks, or at least warn the other players even if they cant check the link themselves

Hello, my name is Isaac and i am a victim. In the land of AOE multiplayer there are depraved beings that have been called “Noob Hunters”. These players are seasoned veterans with experience and skill in the game. However they become bored or angry when losing to players that have equivalent ratings. These players began preying on the weak and inexperienced by crashing noob only lobbies. They also create servers such as “Noobs welcome” or “Noobiest Noobs Play Here”. DO not fall for these traps. All they want is to mess with you and drag out a game of just tormenting inexperienced players.
Stand Up For The NOOBS!!!
Death to Noob Hunters!!

Hey the noob griefers surely exist, but don’t take the data on that site too seriously like that.

Look at me, for example. I consider myself a noob, I’m definitely a potato tier player at normal games. Now look at my record at aoe2.net

153 games with 95 win%. First of all this is fairly innacurate. I don’t really count my games, so I couldn’t say for sure about that metric (even though I suspect it’s wrong anyways), but the win count is surely wrong. There is absolutely no chance I’ve won 95% of my unranked games, this winrate should be way lower.

And second of all, I can guarantee you that only around from 10 to 20 of these games were actually normal games. I mostly play custom scenarios, such as FVD, Cannibal Escape, Horde Survival, RPGs.

How come my game countage and/or winrate could be taken in account to previously judge my skill level on a normal game session? It couldn’t. It’s very inaccurate and unfair, even.

I suggest you to get what I think is the best you could get: gather around with some people that you can comfortably play along with. This could be some work, but I can assure it’s not that hard and the way to go. I’ve been doing this for a while now, and now have a steam group chat with more than 40 players to play custom games on a daily basis.

Mate, I think you just fixed the problem many have with the unranked game: uncertainty.
How about we show the number of games played instead of the ELO in unranked?
It may not show skill, per se, but it can give some hints.

wow that is odd that it would show such a hig hwin rate, but im 95% certain you are the exception to the rule, not the norm, so far there almost hasnt been a single unranked match i played in a “noob” server where there was at least 1 high level troll (judging by their skill)

i understand you dont do it, but we can see from my first screen shot, the server couldnt have been more clear on how low level the host wanted players to be, even if the system is gimped, that guy with 124 games is not “noobs only really bad level” but he still joins the server,

same goes for 478 matches in the next server, even if the server is gimped, it couldnt have given the guy +300 matches played, and even if it did, that means the guy is still on 178 matches and joining a “noob” server

no wonder people are so afraid to play MP…

yeah totally! i come from playing company of heroes, and i know its not fully accurate but at least theres a “star” system in place so you can roughly guess how much time the guy has played COH… even if it isnt always accurate on actual skill level, at least you know when its a mega noob and when it clearly isnt…

Is the creator of topic is somebody from Voobly ?? Many players leave Voobly, because that site divide the players. At Aoe 2 DE, the players here do not receive money for wining a game.They receive money from tournaments…

Also when Microsoft started their server for Aoe 2 DE, TheViper, Daut and other best players played against Noobs to increase their points and reach first 20 places of the ranking.
At every Sport, the Pro players may play with Noobs, amateurs for fun. But Noobs can NOT play at Pro tournaments with Prize money.

Where did you get this view, I’ve never seen it before?

Where did you get such bs from ^^ lol

First thing first, the ranked lobby cant distinguish between noob or pro. It only looks at your ranking elo and at the beginning erveryone has the same elo dosent matter wheter your a pro or the biggest noob in aoe history

So ofc the pros had to play some noobs to get rating and rise into an own elo area of their own. That even the reason many pro players didnt touch the game weeks till months after release cause they didnt want to play noobs till they have enough elo to get good player.

Second, on voobly you can see the elo, amount of games and even recorded games of every player. If you make a looby you can even chose that nobody with more or less elo as you selfe can join. Almost never had an unbalanced game on it, only like 2-3 cause of smurf accounts but that you have in any game^^

Third, nobody like realy nobody gets any kind of money for playing on voobly or winning matches on it XD If that was true i would be rich like ■■■■ after years of playing ^^ Like in any kind of game you only get money when playing an winning in payed tournaments or showmatches and thats only for top 20-50 players and nobody else. Or if your an Streamer who gets money out of it ^^

Fourth, nobody left voobly cause he is only losing their or getting matched only with better player (like i said before you always see who you against and how good he is) but because DE is the better game with looks, QoL features and we hoped to get one unified platform for all players. Sadly the MP is way worse than voobly and in some regards even worse than HD but thats another matter^^

So keep your bs for your self and dont spread lies

It doesn’t matter if I am a “exception”, the point is that this site is very innacurate and you should consider that.

Anyway, what bothers me the most is that I’ve never seen a single post here nor on r/aoe2 that says “Hey I’m X skill rating and I really want to play with people on the same level. Add me on steam so we can group and play togheter any time”

If you’re really eager to have people that match your skill level I strongly recommend doing this. Again, I did and it’s working and I’m having loads of fun!

Edit: I just remembered that here on my country boomers gather around whatsapp/facebook groups to find other people (mostly other boomers) that are willing to play togheter and can sintonize with their skill levels. I’m into some of these groups and works pretty well for them too, they play along everyday with much joy!

This entire thread doesn’t make much sense. But playing much better players definitely is a real problem for new players who are adamant about avoiding ranked.

This is what “noob” lobbies generally look like right now:

Yeah it’s unfortunate. This is unranked though, not sure what people are expecting as a solution.

not sure what people are expecting as a solution.

Show ELO in unranked matches. As stated in this and that topic

Just thought I’d throw my two cents in. I really respect the feeling of how horrible it can be to get crushed in AoE, especially when your opponent comes with archers while you’re still messing around with your board or something. I’ve been there! Sorry if the following is too long but I think it might help you.

I am totally against high elo players spoiling your fun. However, I what I would say is that you only improve by stretching yourself. Last year I could beat the AI on moderate most times, so I tried hard. I struggled. A LOT. I learned some build orders (shoutout DE for the art of war thing, that is brilliant for new players). Nothing seemed to be working, I just got out boomed every time! Then one day, I managed to beat the hard ai once (this was back before DE came out). I was so happy! I played a few games at hard to make sure I was good enough, and lo and behold something had clicked and I was able to do it every time. Then I repeated the process with hardest. Then I played in some HD noob lobbies, again having a really hard time. Then I played on voobly, which was even more intimidating. Finally, I signed up for a tournament advertised in T90s discord, and I lost every game!!

But the whole process was fun. I was learning more and more each time, figuring out new strats and build orders, unit counters etc. Now I’m 1200 rated on DE, and I’m going to keep trying to climb.

My point is, if you possibly can, rather than trying to see these people as ruining your fun, see it as an opportunity. Obviously if you played against someone who is 800 elo points higher than you there is very little to learn, and I get that. But if a 1000 player faces up against a 1100 player, I think you should be able to hang on in the game long enough to at least learn something, like “argh those monks ruined my knight push!” for example. Then next time you will know! If you play against 1000 elo players all the time, its very hard to gain this knowledge, as watching pro games is only so valuable.

Anyway, sorry this was a very long post and you will probably not read it all 11.

Tldr: keep at it, you will improve!