Just look at this picture.
The Tsar is on the right side of the Mongol Khan.
His name is probably, Ivan the Terrible.
The Tsar is also a descendant of Mamai (Mongol) and Orthodox Hungarian nobles.
You Welcome! 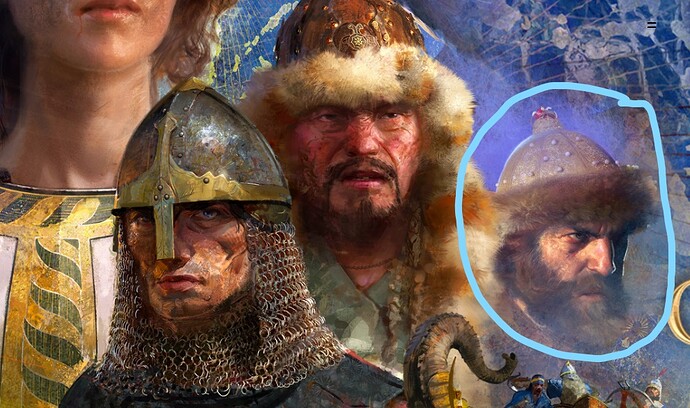 There were also Rus’ soldiers in the video

Yes, and this picture confirms it and I am so happy xD

yeah and there are no meso civs, i am not happy.

Meso will be added later, but it is very difficult to balance and to keep realism as they were too outdated in terms of technology and strategies. Maybe that is the main reason it wont be at the launch.

The main campaign is gonna be the mongol one, and we know that the mongols went to china first, then korea (maybe korea too), then japan(failed twice, maybe japan?), then go to india and the middle east (one side) and the golden horde goes to eastern europe/russia, so it’d make sense to have russians if the campaign is going to be lengthy .

now the real question is, what is the campaign after the hundred year war + mongol campaign going to be?

If I had to ask hopefully if they introduce Japan we get some feudal Japan stuff with warlords and stuff, and hmm maybe some early Americas colonization (defeat of the Aztecs and Incas) which at the same time would try to follow the real history more closely as AOE 4 is attempting to do.

But that would have to be an expansion as it would require spain, portugal, incas, aztecs, etc.

You know, back in the time, in Rus, to become the leader or ruler, they needed to marry a Mongol. It was a must thing to gain support. Later, Napoleon did some research of the Russian rulers and said “if you look at the Russian leader’s ancestry tree, you see Mongols in it”. Soon after that he was defeated by Mongol descendant Russian general called Kutuzov. Just a fun fact.

I’m not happy that we ain’t getting a Greek civilization to this game, the closest I can get is if the Byzantium is added which was half greek/roman. I pray for that.

No worries, if it wont be in the launch. It would be as DLC.

yeah and there are no meso civs, i am not happy.

A good choice of the developer and i am happy

It will not be Byzantium at release, we will get the HRE, believe it!

I pray for Byzantine empire

give me GREEK FIRE I want to kill my enemies with the might of the greek empire!

It will not be. It will be the HRE.

How are you so sure?

I am sure, because one of the campaigns is the 100 Years War.

Okay, well in that case I hope for a future DLC

I want my greek civ in the game

I too, want the Byzantines in, and I want them to have Flamethrowers, Fire Dromons, and Flame Towers.
Give them also Grenadiers, Varangian Guards as Heavy Infantry, Cataphracts, and Trebizond Cavalry Archers.

That would be amazing. I’d also like them to separate them into two ways you can choose as you age up one being the more Roman way (western part) and the second the more Greek way (Eastern part) and have different play styles and abilities like for the Eastern Part add things like Greek Fire etc.

That would make it more interesting in my opinion.

As Byzantines, they would never be Western Romans, as this game starts long after Western Rome has fallen.
Thy would always realistically be the Eastern Roman Empire, which was culturally Greek.