Two buildings that could use visual rework. A pet peeve of mine. (Mosque, Native embassy)

This thing has been brewing in the back of my head for some time and I need to get it out. If anyone from Dev team is looking for things that could fill the next patch notes I’d like to ask to take into consideration updating two buildings from the game.
I was thinking about that for some time but I guess seeing beautiful new models from recent African expansion encouraged me to write about this.

1. Native embassy.
First of all I have to say the artists did a great job and DE version looks so much better than the original one from 2005 release. Just better, prettier, and still faithful to the original. But original always stood out for me in a negative way.
It would be unnecessary and in some ways counterproductive to have multiple versions of the embassy depending on map region or even out civ on top of that, so one universal model is a must. That being said, while very low-tech design is prolly better than a complex building, I have to say the embassy always looked too crude for me.
Both in terms of the design and complexity of the model and overall style.
It’s looking much closer to a normal dwelling or some basic eco building (maybe a poorer version of the trading post?), than an actual embassy, a building of higher prestige and importance. Yes we have to keep in mind simple nomadic tribes as well as highly developed societies we might get in contact with, but these buildings clearly are built by us, while being constructed mostly from basic materials like wood and thatching they could be much fancier.
First of all scale seems to be a bit off, especially when build next to TC, factory or saloon. It should be scaled down 10-15%, to keep the same footprint some props could be added around it to make it look better:

2. Mosque.
Similar situation as above, but less about style and more about the model itself. Also as above, the new version feels visibly better than OG but OG also never grabbed my heart. So: 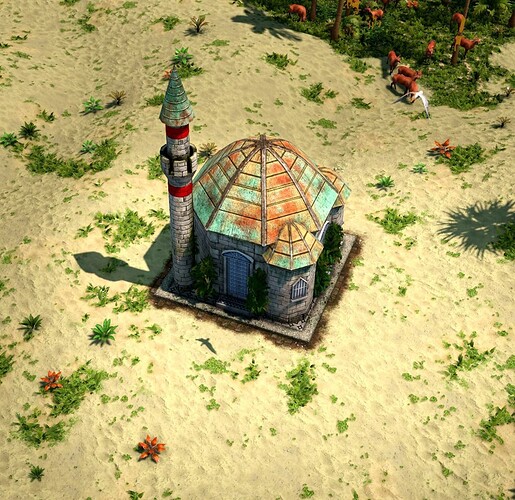 b) T2
Looks much better, even windows are made in a much better scale. Still I would suggest: 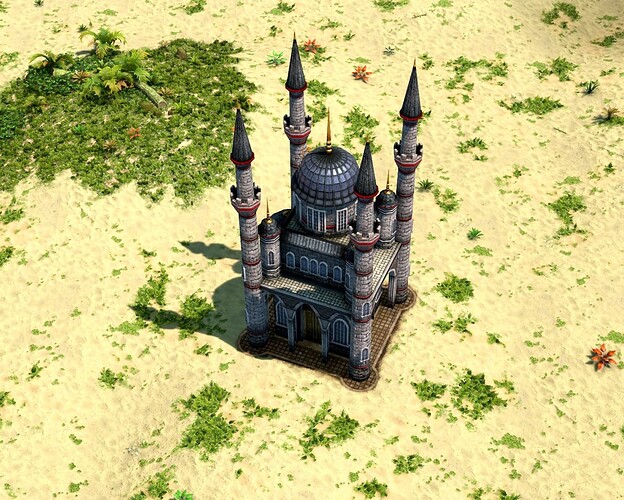 And that’s it. Completely irrelevant and cosmetic stuff, but maybe one day it will be revised and these suggestions might come to be helpful.

I think native embassies should be made map-dependent like DE trade posts (devs did a really good job on that), or maybe civ-dependent like all other buildings.
It’s okay to have a building for every civ like this if there are only American maps but now we have a lot more map varieties and they would look odd.

Just as the trading posts have the architecture of the local culture, they could also do the same with the native embassy.

It’s okay to have a building for every civ like this if there are only American maps but now we have a lot more map varieties and they would look odd.

The huts are out of context on maps of Asia.