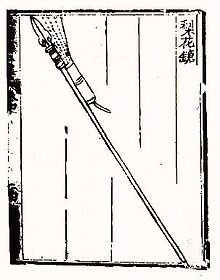 The fire lance (simplified Chinese: 火枪; traditional Chinese: 火槍; pinyin: huǒ qiāng; lit. '"fire gun"') was a gunpowder weapon and the ancestor of modern firearms. It first appeared in 10-12th century China and was used to great effect during the Jin-Song Wars. It began as a small pyrotechnic device attached to a polearm weapon, used to gain a shock advantage at the start of a melee. As gunpowder improved, the explosive discharge was increased, and debris or pellets added, giving it some of The f... 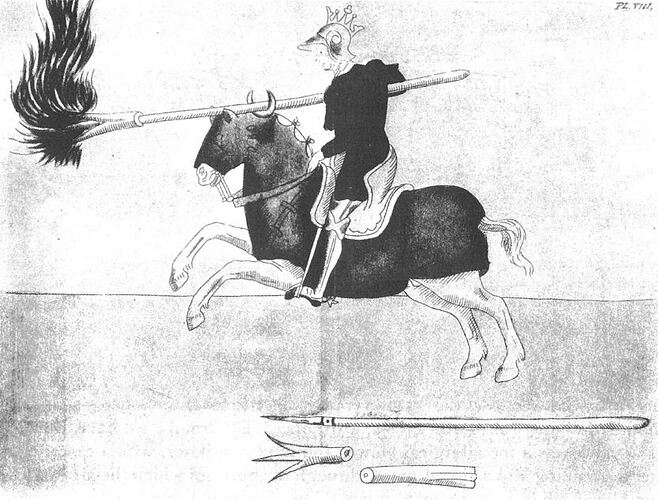 This is a melee cavalry unit that deploys a short-range, highly-inaccurate stream of fire to attack. This attack deals heavy damage while active, and can continue to attack as long as the initial attack is unbroken, but after the first attack ends, needs a short pause(~10 seconds) to reload. Attacks made in the meantime will instead do a much weaker standard melee attack.

This is a 100% historically accurate unit, and was used to great effect against the mongols.

I was thinking it could go with a more specific Chinese civ, something like the Jin or Song dynasties.

Jin Dynasty
Fire Civ
+1 Archer melee armor per age(starting in dark, +4 in imperial)
All fire effects are stronger. (Chemistry gives +2 rather than +1, Heated Shot and Arson are 50% more effective, Fire Ships deal more damage)
Town Bell gives villagers a brief speed boost when fleeing/returning to work.
Taxes - Each House produces a small trickle of gold. The longer the house has been alive, the more gold it produces, up to a cap(about 20 minutes). Damaged houses do not produce gold.

I think this would be a nice way to throw people’s expectations into disarray. House walling? Only if you want to risk your gold. Town bell? A good thing for once! Killing archers with melee? I think not!

And, of course, a cavalry unit that shoots frickin’ fire beams!

I’ll admit, this is a very silly civ. But fun! And(somewhat) historically accurate!

Taxes - Each House produces a small trickle of gold. The longer the house has been alive, the more gold it produces, up to a cap. Damaged houses do not produce gold

Absolutely not. This would be beyond busted

Only if they’re safe!

It’s a 25 wood building that generates gold without any other investment.

Sure. That’s not inherently a problem, though. If anything, it’s a weakness. They have little in the way of other eco bonuses, and it means that unlike other civs, rather than using houses as walls, they need to protect their houses.

they need to protect their houses.

no they dont, they can still wall up, and then make “eco houses” in the back line… 25w is 25w… its dirt cheap…

I’m not talking about ridiculous gold production, here. I’m thinking like, an extra relic or two equivalent for all your houses.

I don’t know whether people will like gimmicky civs like this, but at first it sounds funny.

The house is incressed from 25w to 35 food and produces 1g/min as long as it does not get damaged, until a cap of 20g. So:

Sorta, but better at pitched battles, since its power increases the longer it can stand still and attack a single target. It runs forward and unleashes a fireship-style stream of fire for as long as it’s attacking that one target. It wouldn’t be particularly good against villagers, since they’ll run away immediately and it’ll be forced to move and reload. Particularly good against siege and decent against buildings.

the archer armor is fine, but I would start from feudal age

The reason I made it +4 is because archers are already so weak to melee, too small a bonus could seem insignificant. I’d certainly be open to tweaking it down(or up) if it seems underpowered.

I don’t know whether people will like gimmicky civs like this, but at first it sounds funny.

The house is incressed from 25w to 35 food and produces 1g/min as long as it does not get damaged, until a cap of 20g. So:

That could work. I was counting on the weakness of houses to work as their counterbalancing feature. They’re easy enough to destroy, especially lategame, and getting even a few rams into their housing district could be a really major blow. And then they’d either need to delete them or repair them, but the idea being that repairing is better than rebuilding, because the gold/minute increases gradually, so an older house is always better than a newer one. Building more houses would need to be a pretty conscious decision, because they wouldn’t pay for themselves for quite a long time, and the wood and villager time could well be spent elsewhere. I’d be open to an increased cost for the houses if necessary, but given their lack of other civ bonuses, I’m not convinced that’s gonna be needed.

They’d be particularly weak to civs like the Huns, because their tarkans could run in and destroy their vils AND their houses at the same time.

In age3 er all sorts of special houses that, produce resources, collect or spawn villagers.

Has been tried, Not a fan, don’t add gold houses here too

We’ve already got one building that produces resources, and another that automatically collects them. Why stop now?

An old idea of mine for Jurchen

Because we end up like aoe3 after all its expansion, slowly changing from a plain aoe e3 vanilla game to a game dominated by gimmicky mechanics, auras, special abilities, and special ways of resource collection.

Because feitoria at least is balanced around a high cost and eating up population space. Houses aren’t though and are down right cheap and can be thrown almost anywhere

FYI, the proper latin is ‘bonuses’. Boni would technically translate to ‘good man’.

I think that’s a natural evolution of games. You can’t just duplicate existing bonuses, so you’re gradually forced to use more and more different kinds of bonus. As long as they don’t become overwhelming, it’s okay, and can even be a good thing.

Sure, but the Feitoria is also far more powerful. Feitoria is meant to replace villagers entirely, while this would just be a bonus relic or two.

Depends on how many houses you build

And ask why is Feitoria nerfed, and why is quite criticized by pros, also go and check ESO-community and AOE 3 forums and see what pros think about generating res houses.
The feitoria nerf isn’t even close to be enough, a competent enough player will keep those safe to still get the resource generation and snowball in islands.