The argument is probably gonna be “we give this bonus to someone else”.

Which is an awful argument.

Imagine if Bohemians would get it instead. Would not surprise me tbh.

Monks but then there’s First Crusade 11

They’ll still lose vs Paladins, Battle Elephants, various unique units (TK, War Elepehant, Boyar for example), and Halbs are still in itself extremely cost effective vs Cavalier, even if the bonus dmg is 16

Sicilians Cavaliers are still cavalier at the end of the day. You will be fine with halbs I guess

allright how manny halbs will you need for 40 cavalier? That is not a crazy number cause you see it a lot in late imp

The sicilian change seems unnecessary imo. I predict a future nerf to sarjents. Those things have 8/8… that was ok before but now they get free stone and can be protected by taky cavaliers that resist counters. Perhaps -2/-1 should be fine.
They ruined lithuanians lol.

Hey @Mubashir158 , what was the Cuman buff exactly again?

it seems they want lith to be a hybrid civ with a focuss on cav in stead of a top tier cav and a top tier hybrid civ.
Thf, what cant liths in the current patch except pure archers? They have good heavy CA, arguably the best knight line, hussar, arguably the best skirms, top halbs, great navy, great eco, BBC and passable champions. Giveing theire knight line a little nerf will be absolutley fine

Well nerfing their extra food bonus was enough imo. Before their power was conditioned by relics anyway.

Thanks. Should have saved them elsewhere too

where can us latecomers see the notes? 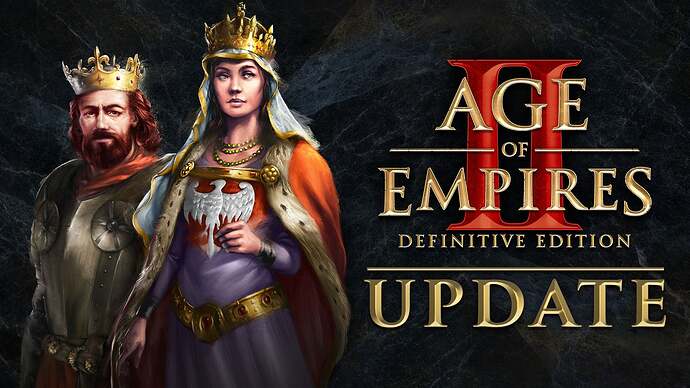 they do not get a nerf on the extra food

No, I mean nerfing their food would have been ok if they wanted to reduce their hybrid potential. Not these changes.

Balance changes below. I’m really excited about these:

-All Units Which Shoot Bullets have their projectiles’ speed increased from 5.5

-Fixed an issue where the hit points of Watch Towers in the Castle Age and Siege Workshops in the Imperial Age were lower than expected.

-Can now research and train the Winged Hussar instead of Hussar.

-The Sicilians now start with an extra 100 Stone.

-Team Bonus effect changed to remove the cost of the first trained transport ship and train it instantly.

Scutage: replaced with the Hauberk technology.

yeah tru but the devs made the choise to keep them as a great hybrid civ and nerf them as a cav civ.
Thats fine if im honest. I would have reduced the relics to +3 but since they get the winged hussar they needed a bigger nerf to the stable so i think its fine.
Idk bout the leitis tho, they always felt too strong for me but they are not over used so its prob fine