the current eco bonus they have is so sad, it’s not versatile, forces them to just go for a boom to fully utilize their bonus just like Indians or Teutons

Forces them to boom? 11
Their current exco bonus makes it easier to get their eco tecs, which, you know, is pretty important. It looks like it isn’t much, but in early feudal having 125 extra wood is a really good thing (it means either more walling, faster military buildings or a couple of extra farms early feudal: this things do matter)

And to op: the last thing the rattan archers need is to be more similar to the plumed archers and to be cheaper. They are already one of the strongest archer UU in the game, especially in composition, no need to make them broken

So you want to make Rattan Archer a Plumed Archer, lets just make Teutonic Knight similar to Berserk and the game is easily balanced.
This game needs diversity.

This bonus just sanding them up to become a slightly better meta civ, that’s easy, you can give every weak civ bonus like this, it doesnt contribute to the civ’s identity not strategic possibilities.
Besides that, in order to achieve the most from this bonus one is required to boom, that how this kind of eco bonuses are being utilized to fullest, just like indians vill discount. The more upgrades (vills in case of indians, farms in the case of teutons) the more value, unlike Malay/Vikings/Malians/Huns bonuses. Simple math.

Honesty not really sure what you mean by Vikings bonus vs Teutons bonus. Isnt it supporting boom as well?

This bonus just sanding them up to become a slightly better meta civ, that’s easy, you can give every weak civ bonus like this, it doesnt contribute to the civ’s identity not strategic possibilities.

Done some testing in the scenario editor for the new +100hp battle elephants, I’m getting them as having a:

My gut feeling is they are still fundamentally too weak to halberdier to make them ever worth while. Sure there are some niche situations where it works but they are few and far between

My gut feeling is they are still fundamentally too weak to halberdier to make them ever worth while.

Interesting data. I’ve had a few games against Turks where I was able to spam elephants and their spearmen could not counter it. They do have habe camels, but seemingly not a great option either. I’d be curious to see the stats on both those matchups.

My gut feeling is they are still fundamentally too weak to halberdier to make them ever worth while. Sure there are some niche situations where it works but they are few and far between

Vietnamese Elephants lack blast furnace, it means halbs get one “free” hit before dying compared to all other elite battle elephants.
With the old Chatras the 50 extra hp weren’t enough to offset it (halb hit does 66dmg after armor), now they technically can tank it.
A FU Paladin (not teuton or frank) dies in 5 halb hits, FU elite elephant dies in 5 hits, no wonder their efficiency against halbs is lower, since Paladins cost 135 res vs 190 of elephants.
Vietnamese now is a bit better, dying in 7 hits. Still a bad trade though.

Camels shouldn’t trade as good as they do against Paladins, because differently from halbs, they don’t do any extra damage to elephants (except the base bonus damage vs cavalry).
So basically they do the same damage that they do against Paladins against targets that have almost 80% more hp. Sure elephants have 1 less armor and attack slightly slower (2 vs 1.9 of paladins), but I don’t think it’s that meaningful.
Malay EBE should even be a bad trade for camels, not just worse than Paladins.

And Viets are solid enough. We see them way more than other civs

The issue is that only makes them stronger where they’re already strong.

Eh, I would say that their castle age is solid but it isnt much better than their feudal age.

Many time but I still request for 3 thing and ask vote for it.
1: delete frame delay shoot = plum archer + reduce 5w and 5g for rattan archer
2: remove the paper money to other tech
3: need small bonus economy start game maybe + 100w or reveal 8 sheep from start.
It need for Viet they still not balances civil.

Rattans are already strong so don’t really need a buff, but reducing attack delay would make them more fun to use which is good, and wouldn’t make them OP imo, so I wouldn’t mind doing that as well.

The data doesn’t really support either of your statements sorry

We see them way more than other civs 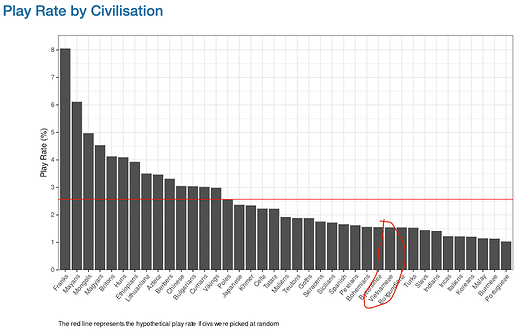 Eh, I would say that their castle age is solid but it isnt much better than their feudal age. 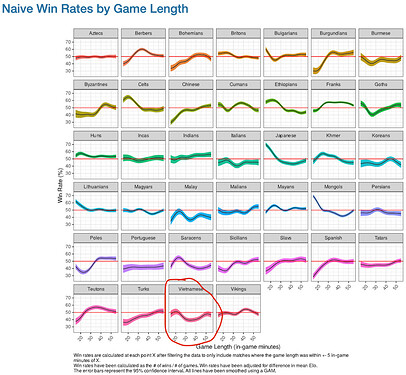 They are even worse on closed maps

My personal take (i.e. subjective and likely biased by my own play style) is that they don’t really have that much of an edge over other archer civs (most archer civs get very good bonuses as well) and that they have 0 advantages vs knight civs and as such in castle age they just fall off until they hit imp / post-imp where they do have quite strong compositions.

I think there are a few angles that can be taken to address this (i.e. I’m suggesting 1 of the following not all 3):

Would the following be reasonable for making elephants more viable?

So I still argue that the biggest obstacle is that halbs are too efficient against them. However it’s not just the efficiency it’s also the fact that they kill them so quickly that its not really viable (at least in 1v1s) to properly support them or protect them from the halbs.

So I am wondering if it would make sense to keep the halbs efficiency against them the same but to slow the fight down so that support units have more chance to actually protect the elephants. I.e. I am thinking that we reduce the damage of halbs vs elephants but in turn give halbs bonus armour against elephants, this can be constructed so that they still trade with the same resource efficiency but are simply taking longer to do so.

This would in theory make hybrid compositions in 1v1s like eles + skirms more practical.

To put some numbers to this, at the moment it takes halbs 128 hits to bring down 20 Viet eles whilst it takes paladins 600 hits to bring them down. This means at the equivalence point (see my above post) halbs kill elephants ~300% faster than Paladins (factoring in reload time). I feel like my proposed change would allow elephants to live up to their “meat shield” role without breaking how efficient halbs are against them.

I like this idea, but there is a risk that make them too good at “tanking” halberdiers so that an elephant+skirm composition became unbeatable.
Of course, with little tuning it could work

But after thinking about your proposed changes, how about buffing vietnamese skirms? This way, they would be better against both archer civs and halberdiers.
Maybe giving the elite skirm upgrade for free as a power spike in early castle could be enough. This was proposed before, and rejected because it is a huge power spike, but after seeing your data I think it wouldn’t make vietnamese oppressive in castle age against archer civs.
Also, this helps to tech into imperial skirm faster.

I mean, Viper has said that he thinks Vietnamese are very good, and that they didn’t even need the Chatras buff, which ensures us that they are being picked, not because of limited options, but because they are actually considered good by (some) players.

I think it has more to do with top players making better use of temporary advantages than the average pub (which has been my opinion on them for almost a year now, call it confirmation bias) which is to be expected. In that regard, it would make sense to see it picked at the top level even though it underperforms for pubs.

Well, i dont know their pickrate at tournament level, but you can see their winrare at around 1600 elo here. 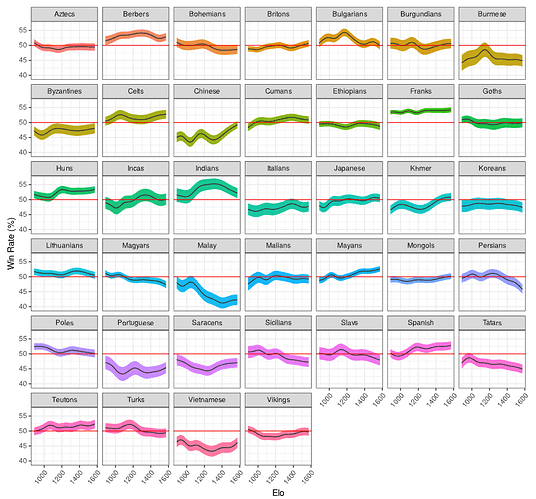 There is room for improvement

but you can see their winrare at around 1600 elo here.

Oh, perfect for what I was trying to say! Althoug the pro players subsample is still so little that mustnt affect the graphic a lot.

Also for reference, this is the “averaged” win rate for >1750 Elo RM Open Solo (sorry for potato screenshot quality) 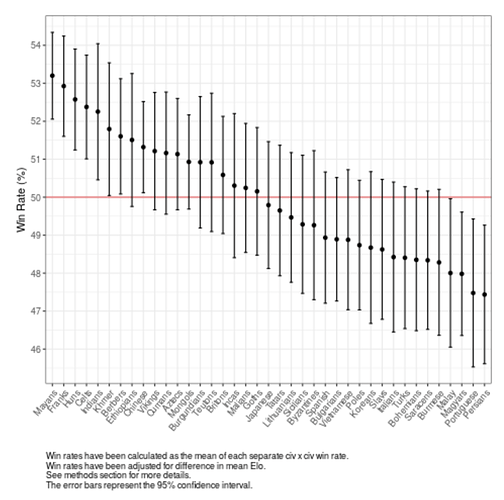 Hard to draw too much in the way of conclusions due to the super wide confidence intervals but it does stand out to me that Vietnamese are not performing as highly as the Pros seem to think it does.

Or maybe just people dont know how to use it and the civ is just fine?

I’m not sure if you were replying to my last message or the one from JokerPenguin. If it was mine the >1750 group is the top 2% of the player base, at this point I really struggle to believe the “they don’t know how to use it” argument