It’s that time for you to weigh in on the maps you want to see in the next 1v1 Ranked Map Pool! Here are FOUR of the SEVEN (total) maps that will be showing up in the next map pool update:

Now it’s your turn to vote for the THREE (3) maps that you’d like to see join the pool. Of the options below, the three that receive the most votes by Sunday will be added to the map pool next week!

Vote for your 3 favorite maps! Don’t forget to click the ‘Vote now!’ button at the bottom of the post once you’ve locked in your choices.

Thanks for participating in this week’s poll!

I hope city of lakes makes it. Seems interesting.

Again no option for 1vs1 Nomad? Come on guys…

Then they finally pick one of the RBW maps into the voting, but then the picked one of the worst maps

Again no option for 1vs1 Nomad? Come on guys…

Yeah, what is wrong with these guys. wtf.

You mean Mountain Ridge? Its a pretty terrible map. African clearing also plays out a lot differently to normal Nomad. And Nomad is hugely popular and now pretty much a permanent feature in Team Games. So im struggling to see why it has had so few opportunities in 1vs1. I think it has been voted in every time it was an option…

A lot of people feel this way about Arabia too! You don’t have to love every map. It’s one of the great things about AOE.

You mean Mountain Ridge? Its a pretty terrible map. African clearing also plays out a lot differently to normal Nomad. And Nomad is hugely popular and now pretty much a permanent feature in Team Games. So im struggling to see why it has had so few opportunities in 1vs1. I think it has been voted in every time it was an option…

In the current map pool we have African Clearing as map with nomad start. I think previous map pool also had a nomad start map (wasnt it Nomad or Land nomad?).

I think Nomad was always mostly a TG map. It can be played in 1v1, but it was more popular for team games. So i understand why it gets traction in TGs, but not in 1v1.

The map pool also need to be divers. Every time the same maps will becomes boring. Having some gold oldies (Arabia and Arena for 1v1) is fine. But we dont really need to much maps that are fixed in my opinion.

But if you want a third fixed map in the map pool, then it should be Nomad for sure. You cant really debate that point. So if the devs decides to add a third fixed map and that will be nomad, then i am totally fine with that. I do like playing on Nomad (it doesnt really matter which kind of nomad start) once in a while. If it is in the map pool, i would never use a ban for it. I do enjoy playing no TC starts.

I would absolutely love to play this map. I bet there’d be some crazy games.

It would be like 4 lakes but you couldmove the docks forward and help with defense.

Isn’t there much less fish in each lake compared to four lakes. 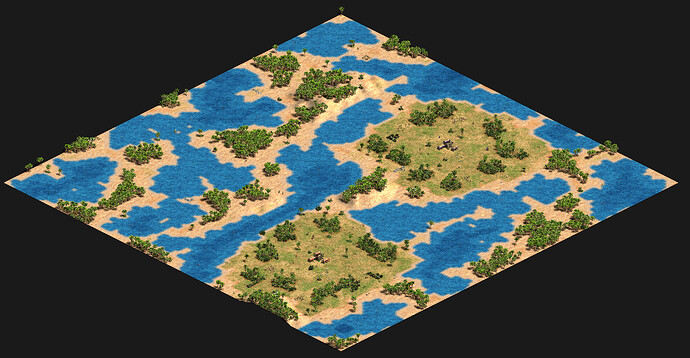 This is the first map gen i got from city of lakes. One player has just his starting area. Other player have lots of different small areas.

Based on multiple map gens: The map looks like black forest, but the many trees are changed to lakes. And the area of each player is pretty much unfair.

Luckily it looks like this map wont make it into the map pool. It looks terrible.

Yeah good point. I thought it would have been more land and like ponds of water to use where building a navy would help much as the water doesnt connect

Arabia is the most balanced and fair map. Every tourney set has a game there and all the pros play it.
Nomad is heavily luck and civ based so. Fine if ppl play them but its not a good map for a ranked ladder.
They are not compareablebin the slightest

Nomad is about adaptation, exploration and taking good decisions, the people that said it just about luck dont know how to play the map surely.

In 1v1? No, in 1v1 is about picking spanish and making conqs.
Alternatively, if you are playing malians or persians, the one who loses the water, and therefore the fish, loses.
And yeah, there’s a lot of luck involved when it comes to your tc placement, no one can deny it.

Nomad is about adaptation

Unless you pick spanish, then you can almost always FC and slap a castle on your opponent face ^^