It’s that time for you to weigh in on the maps you want to see in the next Team Game Ranked Map Pool! Here are SIX of the NINE (total) maps already coming planned for the next map pool update:

Now it’s your turn to vote for the THREE (3) additional maps that you’d like to see join the pool. Of the options below, the three that receive the most votes by Sunday will be added to the map pool next week!

Vote for your 3 favorite maps! Don’t forget to click the ‘Vote now!’ button at the bottom of the post once you’ve locked in your choices.

Thanks for participating in this week’s poll!

No Nomad among the dev picks this time? Well, I guess we will vote it in then.

Can’t we get Battle of Africa maps?

uff arena again… well let’s get Nomad back in there

Arena is permanently part of the map pool

I would be fine if they added nomad as fixed map instead of a free dev pick. So you got 4 fixed maps, 2 dev picks and 3 from the voting.

Which devs actually pick? Do you all have a vote, or is it just a few people?

i don’t want to be annoying but mountain pass and mongolia don’t really work as intented in tgs.

mountain pass doesnt have a pass and is arabia with team positions, but no tc start.
and monolia is a boom to imp map where there is no space to fight later bc of the wood and cliffs.

edit:
this shows just how shot the forums community is… mongolia!? 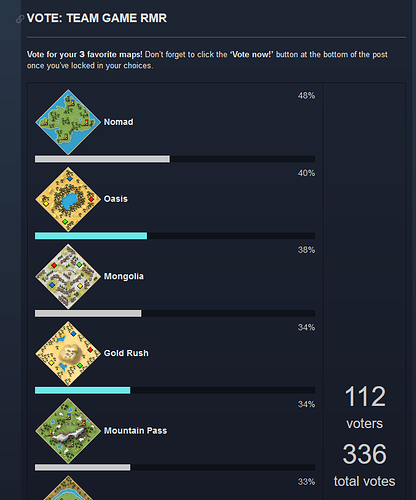 Do people actually enjoy playing nomad games? They’re a waste of 6 minutes, until somebody remembers to drop.

Yes some of us enjoy, esp since the gl vs china showmatches and heras nomad build order video ive been getting into it.

Do people actually enjoy playing nomad games? They’re a waste of 6 minutes, until somebody remembers to drop.

Yes, they are great. I like the set up: Not team combined, but scattered around the map. Also there is no reason for pocket pickers to claim a pocket spot, which is great. Playing Nomad is quite refreshing compared to other maps. As result currently i mark it as favorite.

If you are one of the players just drop such game, then you are a toxic, selfish player.

I like them a lot! I prefer African Clearing, Land Nomad or Steppe to vanilla Nomad, but they’re a lot of fun.

When nomad isn’t a dev pick, which is often for some reason, it’s always gauranteed to be voted in.

Gold Rush in both pools makes no sense

@devs - Nomad is DEFINITELY going to get voted every time. Why not keep it as a fixed map, have 4 maps for voting and give us a couple of extra bans.

People have to stop liking maps I don’t like /s

People have to stop liking maps I don’t like /s

This but unironically. People don’t even have to vote in maps I like, just different maps.

Why not keep it as a fixed map, have 4 maps for voting and give us a couple of extra bans.

@BBQTurkman - Please add Nomad as a permanent TG Map. It makes no sense to keep putting it to a vote when it wins every time. It has higher play rate in TG than BF, which is already a permanent map?!