As many of you will know… so much people in multiplayer uses a “glith” building walls without building tower walls. That have sense because these towers have the same price that a normal wall segment but are more shorter. Making so the walls is a innecesary work when in the game the walls already should to build without towers. 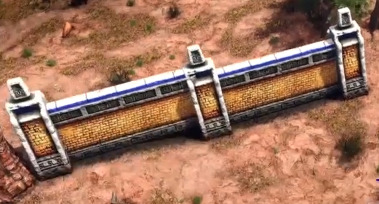 So i propose that in game walls will be built putting towers only in the edges by default. And if would be neccesary, doing wall segments more shorter for balance reasons.

Thats not the way, if a built tower is deleted that should remove the walls next to it and tower should be free, 5 wood the first one to avoid tower spam. This way keep out towerless exploit

Yes that could be done. But i see problematic this walls … would be more simply that walls were only composed by wall segments and towers only apeared in corners. Having two differents tipes of wall is problematic. If for example the towers were only in corners and were more stronger to make up for being more little… i think that this would be bether.

This is not so much a glitch but a higher player level of strategy. This has existed before even DE came out. It is a fundamental part of the game at this point and should not be removed. The problem is that if it is to be removed they need to rework how walls being destroyed works. As of right now if you build walls with pillars and a pillar gets destroyed both sides of the wall collapse. This makes walls utterly useless and why people use the strategy. It is honestly an easy thing to learn how to do this with walls.

Yeah it definitely feels like something that Ensemble Studios didn’t intend. I can’t see Ensemble intending players having lines of un-aesthetic pillarless walls.

As you say, it is easy to learn isn’t some game-breaking bug. However it should be removed for the following two reasons:

Sure aesthetics are a good thing to keep consistent, however, like I said, if they change it they need to rework wall destruction because where walls are used most (Treaty) they will become meaningless.

No, this is not a strategy. Whoever used this mechanic is using something that was not intended to be used like this. So one way or another this needs to be patched. Either it is impossible to build walls without towers or everyone can build it without so much micro.

When a feature has been in a game for 16 years without the devs changing it I am going to call it an intended feature. If you think building pillarless walls is a lot of micro you need some serious work on your micro.

There are many things that were in the game without being patched because this game hadn´t maintenance. AoE3:DE has done many changes and that could be one of them.

Like I said, if they want to change pillarless walls then they need to rework how wall destruction works otherwise there is no point to walls.

Walls protect your units, colony and eco. They slow down the enemy advance. How is that pointless?

It is because of how the mechanics of wall destruction works. When a single pillar dies it takes both wall segments on both sides with them even if there are more pillars and they are at full health. It blows open a hole so large that the walls pretty much are worthless. I am also speaking as a treaty player where walls and this matters way more than in supremacy.

Given that 12 of those 16 years the game saw no updates, I’d say that point is moot.
Walls need a rework.

Not at all, I dont use pillarless because I feel like it is unfair for some civs like aztecs, haud, lakota or China. Building walls as intended works, and this shouldnt be a problem for advanced players who know to counter.

There are actually three walls in the game. Long Wall, Short Wall, and Pillar. Though all of them cost same but Long Wall can block much wider space than others. Everyone who has a brain will say “It is not right.”

Ah yes but you said worthless, not worth less than they are with the exploit. A big hole in a long wall is much better than no wall at all.

I am all for a rework, but the posters idea of only removing pillarless walls to be built with no change in mechanics to how walls are destroyed is going to be bad for treaty games.

In treaty games it matters hugely since having massive chunks your walls gone in a couple mortar volleys is going to end games insanely fast. No treaty player wants to spend 30-40min playing and then have no walls at the end of it in a few seconds. Where as a single segment missing is at least able to be defended. Again, I am all for a rework but they need to keep in mind the destruction mechanics.

While we are on it can we change the wall skin aswell for the like one we gave in the first mission of the campaign?