We need a Chinese campaign. Which leader should it center on?

At present, we only have the Lake Poyang mission for playing as the Chinese in an official campaign. Given China’s rich history and has fought against plenty of invaders and other civilizations like the Mongols or Vietnamese, why hasn’t there been an official 5-mission Chinese campaign so far in AoE2?

I’d love to see one added at some point, but I’m not a history buff, so I don’t know which leader would be the most appropriate to center such a campaign around. Anybody here have some suggestions?

A lot to choose from of course, but I think a campaign focused on the founding of the Song Dynasty by Zhao Kuangyin/Emperor Taizu would be cool. Would include fighting against other splintered Chinese kingdoms, but also against nomadic tribes like the Khitans, and fighting war elephants of the Southern Han and the reunification of large areas.

3 Kingdoms era is very early. Although if there’s any civ that could pull off an extremely early campaign, it would be the Chinese, but having a campaign about something a couple hundred years before even the Goth one gives me pause.

For me there are three good options. One could be the begin of the Song Dynasty since it could make a good founder and successor type of story. The second one could be something like 100 years of the Tang Dynasty without focussing on only one person. It would be a bit disjointed but it could make for a lot of very different missions. The third one for me could be the rebellion against the Mongols that ended with the foundation of the Ming Dynasty. Could make for a decent underdog story

I personally recommend Yue Fei.
He was a hero of that era, and even today China still regards him as a national hero. Like El Cid and Joan of Arc, his dramatic life fits perfectly into a campaign. 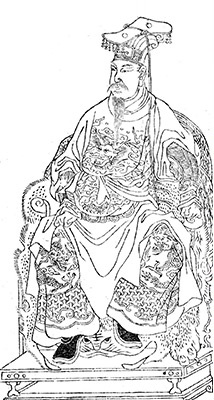 Yue Fei (Chinese: 岳飛; March 24, 1103 – January 28, 1142), courtesy name Pengju (鵬舉), was a Chinese military general who lived during the Southern Song dynasty, known for leading Southern Song forces in the wars in the 12th century between Southern Song and the Jurchen-ruled Jin dynasty in northern China. Because of his warlike-stance, he was put to death by the Southern Song government in 1142 under a concocted charge, after a negotiated peace was achieved with the Jurchens. Yue Fei is dep Yue...

In my imagination, his story is narrated to a Han Chinese recruit by a Jurchen captain in the camp of the Jin army on the eve of the battle with the Mongols.

In the first scenario, the player plays the Northern Song Dynasty and needs to choose to break the covenant, give up the alliance with the Liao Dynasty, form an alliance with the rising Jin Dynasty to fight against Liao, grab resources through destroying Liao’s buildings, or continue to support Liao against Jin to buy time for preparing for the subsequent struggle. In any case, the Jin’s army is unstoppable and will eventually defeat Liao and declare war on Song, and Song (i.e. the player) must retreat 100 villagers to a southern stronghold before the base is completely destroyed, which symbolizes the beginning of the Southern Song Dynasty. The AI players playing Mongol tribes, Xi Xia and Goryeo are respectively in the small corners of the map, they are initially Liao’s allies and have a chance to provide helps, but they may stand by or even become enemies after Liao surrenders to Jin.

The second to forth scenarios show the patriotic Yue Fei following his mother’s teachings, participating in imperial examinations, joining the army, becoming a general and launching the Northern Expedition. From youth to midlife, he liberated the villages, rescued the besieged cities, suppressed the rebellion of warlords and robbers, defeated the puppet regime Qi Dynasty, repelled Jin’s invasion led by Prince Wuzhu, and won the fear and respect of the opponent Jurchen army that includes the narrator’s father and grandfather. From one person to thousands of people, he gained a group of loyal friends, comrades (especially veteran General Han Shizhong) and subordinates and admired by the whole Chinese people.

In the fifth scenario, Yue Fei, Han Shizhong and Song’s army began to lay siege to Jin’s capital. The Northern Expedition was almost a success, but Yue Fei didn’t have much time left. He must complete all objectives under strong resistance from the Jurchens and Wuzhu’s army before the 12th order arrived, or the siege would fall short. In any case, after the emperor issued 12 orders, he had to return south. What awaits him is a great victory, or is it a palace intrigue?

In the sixth scenario, on the same map and the same location as the first scenario, but the time line came to the moment of the narration. This time the force from the north are the Mongols, and the player has to play the Jin Dynasty to defend the wonders of the Jurchen from destroyed by the Mongols. Yue Fei and the battles with him were in the past, but history kept repeating itself. The Southern Song Dynasty, which is an ally in the south, promised us their assistance. Would the Chinese emperor this time make the same mistake of breaking the covenant and assisting the invaders from the North?

Not a fan of the last scenario as it has nothing to do with the story,other than that its a nice story and gives the chance to add Juchens as a civi.

Having the last scenario, the satire might be complete better.
One of the reasons for the demise of the Northern Song Dynasty was because they turned their backs on Liao and cooperated with Jin. After the Southern Song Dynasty abandoned Yue Fei’s efforts, they eventually faced the same history. They turned their backs on Jin and cooperated with Mongols, and also finally conquered by Mongols. This is even another and better interpretation of “Into China”.

I think Yue Fei’s story is very suitable to introduce into the game with Jurchens and Khitans in a themed DLC.

Without any doubt it should be Gaozu the founder of Tang dynasty. In general the campaign for sure should be in Tang period.

Defense against Genghis Khan would be fun

I’ve been told that would fit AoE1’s time better

As for an AoE2 campaign, I think it could be about Wang Tong or alternatively, something in the style of The Hautevilles.

Taizong or Dou Jiande imo. Dou Jiande has the best story while Taizong really showcases the height of imperial China

A campaign on the Tang Dynasty would be great. It need not be based on any specific ruler (like the Hauteville campaign). But it could start with Tang Taizong and his campaigns, two scenarios on Wu Zetian and the last one/two scenarios on the An Lushan Rebellion. They could bring in Koreans, Tibetans, Jurchens, Khitans (new civs) and even the Japanese (Tang involvement in Korea vs Yamato/Baekje (Baekje–Tang War - Wikipedia)

I think Kublai Khan should be the villain of a Japanese campaign featuring around the Mongol Invasion of Japan. It would be a rare opportunity for both a naval-focused campaign as well as one of the few historical incidents where Japan was fighting a foreign enemy. Lot of opportunity for thematics around faith, naval build-and-destroys, and the rare change to give it finally to the Mongols.

That’s not to say that Kublai can’t be the protagonist of another campaign for the Chinese! Edward Longshanks was epic putting you in the command seat of the wicked English.

Eh Kublai Khan invasions got both destroyed by typhoons, doesnt sound that interesting

I had a similar thought for a Persian campaign based on the Ghaznavids, narrated by a Persian scholar in Tamerlane’s court who stands in for Ibn Khaldun, explaining how empires rise and fall.

You start as the Cumans, standing in for Turkic slave-warriors serving the Samanid Emir fighting the Kara-Khanid Tatars, as well as the Afghan Shahis (Gurjaras), before rising against the Emir to take the capital Ghazni. Your army gets Mamelukes and Ghulams to reflect the dependency on slave warrior.

The missions 2-4 show the Ghazanid forays into India, with the 5th mission having you play the dying empire as it is beset with attacks from the Seljuks and the Ghurrid rebellion. The mission is complicated by periodically having resources deducted from your treasury to pay for the Ghaznavid Shah’s wasteful lifestyle, hindering your ability to stop the invaders and crush the rebels. Alternatively, you lead the Ghurrid rebellion to topple the Ghaznavids. The story concludes with the narrator remarking on the cycle of rising and falling dynasties, and that this will plague Persia and other great realms fir centuries.

There were a few land battles, and the typhoon element could be minimized while playing up naval combat.

The Pachacuti Inca campaign was highly criticized because the player was constantly fighting other Inca. As much as the Imjin and Sengoku Jidai are the most iconic Japanese conflicts, it would quickly get boring fighting other Japanese all the time. We already have Kurikara and Kyoto for that.