What is your most hated unit and why?

Title states it all. What unit in all of AOE3 do you hate the most and why? I am curious with this, and I will state my two most hated units and why.

First, the Dutch Ruyter. When I first got AOE3 back in like 2005…I think, I didn’t realize initially that skirmishers beat ranged cavalry, so I would always use cavalry archers or dragoons and they’d get shredded by the mass of like 50 Ruyters. When I finally realized the skirmisher beat them, I was pretty much like “this unit disgusts me!” When the Asian Dynasties came out and I got China as my main, and then saw Repelling Volley, the Ruyter and all its relatives ceased to be a problem but that disgust stuck with me over the years lol. The Ruyter is just a good unit, best ranged cavalry, in my opinion.

Second, I despise the Chinese iron flail more than any unit. They serve an exceptionally niche role, killing skirmishers and archers. Some claim they are good against artillery, which is utter nonsense. I think an Exalted Iron Flail has 39 attack, while an Imperial Hussar has 60. The Spanish Lancer is more effective, at Imperial level, like 750HP and 40 attack, slightly higher than the Iron Flail but like 100 more HP. I find myself using the iron flails only against Russia, to solely eliminate Strelets (duh) and against the Inca, to counter their Jungle Bowman. On top of that, they receive no bonus against heavy infantry, so they just die against musketeers, pikemen, halberdiers, etc, etc, while the Spanish Lancer gets its damage as a blanket times 3 (or 4 with that one card that’s name escapes me right now…) against ALL infantry.

Instead of using iron flails for anti-light infantry, I use Steppe Riders, who do about 30 damage, times 2 against skirmishers, they use up only 1 population spot and they are fast enough to run away or kill skirmishers and then move on and attack buildings or villagers.

Ok, so like, super curious to see what you guys say lol. What do you hate and why? Did one unit traumatize you back in the day? Is it just a lame unit? Or is it something else?

For me it mostly depends which gamemode Im playing.

In treaty in vanilla, you knew what time it was when you saw a cav box of opprichs enjoying their stay in your base. Or in general the cav box units like opprich and dog soldier.

Another unit I despised in vanilla is Gendarme, as it was spamable and almost impossible to beat with most nations.

And I think just in general a unit I hate is the mortar as I like to play defensive and seeing a bunch of them rolling up together with massed other units of which I know I dont have a real counter possibility at the time just makes me slowly die towards my buildings collapsing.

A unit I hate purely esthaticly speaking is the gatling gun and American General. The last gatling upgrade is literaly the gatling gun decorated in gold like almost entirely and the wheels looking like its a ■■■■■■■■ monster truck. It just looks so bad when you try to play a game with historical theme. The general is just cringe for his voice lines: “FoR aMeRiCa!” when all the other explorers just say normal stuff.

USA’ infantry, its hard to differenciate them on the battlefield to attack with counters.
Others I hate are the portuguese mortar and Hauds field canon

The indian age 2 skirmisher.
IMO that’s the most OP unit in the game, for the simple fact that it is available in age2 and you don’t even need to sacrifice a card slot for it.

This is quite difficult as there are so many.

As someone else said I dislike mortars in general just because a few of them taking you by surprise and boom your factories gone and it’s gg, same with petards just a bit of a cheap thing to do.

Urumi is probably number 1, so many times I’ve defended the sepoy rush pushed the agra, just about to siege it down and urumi pop and whole army destroyed. 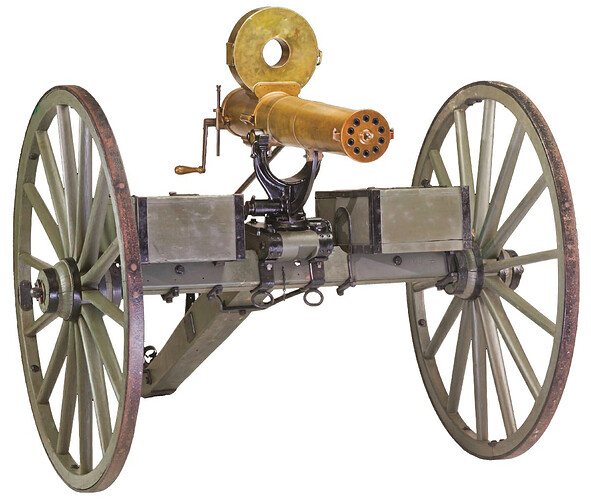 “the golden gatling” is real, is only brass

Technically many civs have skirms age 2, Dutch, India, japan has the yumi witch is a better skirm, Russia has the strelet witch is a more cost effective skirm that takes more population per power you could say.
Usa has the state militia, just a better skirmisher that costs less.
Ottomans have the abus gun, it’s a more expensive skirm with more attack and less HP.

Ashigaru Musketeers, because I’ve been conditioned to hate them after watching them, controlled by random Japanese player #6782, nonchalantly waltz into my base 6 minutes and destroy me while their raid-proof eco slowly allows their spam to overwhelm any anti-musket defense I can muster. It gives me great pleasure to massacre Ashigaru in an open field.

Well the strong candidates are obviously caros because they are stupid designwise.
But actually i hate culverins the most. It unlimbers always at the wrong time, it shoots infantry at the wrong time, it does “fake shots”…it just feels bad to use. I can pull my hair out in treaty games where they always end up doing random stuff

they where suffocating in vanilla. I’m glad their ranged resistance was nerfed but I hope they get changed further. gaining melee resistance as well as a slight damage boost and cost increase so they can actually beat hussars without micro while taking more damage from ranged units. it would make them far less frustrating while making it easier for them to perform their primary function.

In game the wheels and side arms are also decorated with it.

The ARCHER KNIGHT (Aztec siege and artillery counter).
It just feels like it doesn’t do enough damage vs buildings and not even to artillery unless you mass them.
Which also messes with the cost/pop efficiency. Would be nice if they made it’s damage a siege damage like huaracas.

The HOWDAH (Indian elephant dragoon)
I’ve tested it’s efficiency vs cavalry compared to other units, it sucked horribly.
It does huge damage, yes, but it can’t kite because they are slow, it can easily be focused by skirmishers to kill them (Since unlike ruyters there will probably be 3 to 4 of them only) and they don’t have melee resistance which makes them lose to the one unit they are supposed to counter the best, cavalry (It’s like a war wagon, with explosive diarrhea).

It just feels like it doesn’t do enough damage vs buildings and not even to artillery unless you mass them.

In another Thread we tested this and Arrow Knight . albeit it could use a buff - its nice enough to kill artillery easy. People are too harsh on this unit.

My most hated unit is:
Oprichnik - since after a certain mass point, they are uncounterable (you can goon mass but they still wreack havoc);

Most useless unit: Priest, Spy, Jaguar Warrior
(Priest - no one uses them as they are too expensive)
(Spy - only good vs Sweden when they use a Jaeger Mass, but there are better and less expensive counters to Jaegers);
Jaguar Warrior, expensive Skirm that is tagged as heavy infantry, and can be kited by any skirm unit. If they were like Urumis, then they would be excelent (as urumi are resistant to ranged damage) but they arent, and convincingly lose even to masses of musks

Bit harsh on those units, I also thought priests/healers were fairly useless until saw a casted game where they made 1 priest and used it to heal all of their low hp mamelukes, massively increasing the effectiveness of the shipment, although that is probably their only real use to heal expensive units/mercs.
Spy’s are very underrated, they are amazing vs japan to find the monks and kill them, then you just leave spy nearby in stealth, if they get revived instakill them and back to stealth, so frustrating for japan and totally shuts down a shrine boom. It’s also not even bad to build a church now that it gives xp trickle too.
Jaguar warrior is a bit niche yeah, but where it shines is to leave them in stealth and attack right in the middle of a skirm mass or artillery, it’s 1 of the strongest melee units in the game with many upgrades too.

until saw a casted game where they made 1 priest and used it to heal all of their low hp mamelukes, massively increasing the effectiveness of the shipment

Let me guess, the Aussie Drongo video of Russia vs Ottomans? The guy made 1 imam and healed up to 1,5 worth of mamelukes (Potentally 600 coin in return)

Jaguar warrior is a bit niche yeah, but where it shines is to leave them in stealth and attack right in the middle of a skirm mass or artillery

I agree they are strong, but duuuuude, you shouldn’t use them on top of a skirmisher mass, they will wreck the jaguars down into kittens, artillery raid is fine tho, they wont have much to respond with melee on top of them.

If you are really into stealth attacks you can get a stealth ability for the coyote runners which also will work better against the 2 units you like to use the jaguars for.

Oprichnik - since after a certain mass point, they are uncounterable (you can goon mass but they still wreack havoc);

Allow me to disagree hahahah.
Dragoons can shred through the Oprichnicks. If you are playing vs Russia you obviously want to keep a good ammount just in case of a raid in your way, walling factories is also a good idea to slow them so your dragoons can make it in time.

Anything else that is melee will also wreck them since without it’s multipliers it’s one of the worst cavalry you can spam, so you can use heavy infantry or even heavy cavalry of your own to wreck them.

Yeah I think so, I mean he didn’t get max value out of it there but I can see it being used in that way with a lot more effectiveness.

Yeah I know technically skirms counter them, but if you time a stealth attack forcing most of the skirms into melee with some coyotes running in, it completely prevents them from kiting and jaguars do beat skirms easily in melee.
Jaguars really shine against musk/cav tho, completely melt them.

Ok, first, I agree with the gatling gun, that thing does just look goofy, as it did historically. I hate that it has that “doesn’t need to reload” card. That’s impossible, everything needs to reload. With that said, the Chinese flamethrower should have a reload too, that just breaks my immersion lol.

And ok, see, your hatred of the mortars is what I’m talking about when it comes to Ruyters lol. And I remember that vanilla cuirassier with like 1050HP, trains instantly, beats even Tercio and Jinete.

OK yes! I have had this same problem! Only the Volunteer looks different to me, if they’re all bunched up. When I play against them as an AI, I always select light blue as their color so I can SEE Their details. If you select standard blue, Regulars and Sharpshooters look the same!

Ok, so the “field cannon” is one of the most infuriating units. It shouldn’t be good against other artillery, it’s a falconet, with the bonuses of a culverin, and the damage against buildings of a heavy cannon. NONSENSE. They should get “field cannon” that is just a falconet, and then get “siege cannon” which is just a culverin or whatever. They shouldn’t have all 3 in one unit.