Im posting this because this is not the first time. It has been like this for a long time…

On a typical evening, I just want to play a lobby game but more than half of the lobbies are treaty…I have scrolled to bottom

the remaining few normal setting games more than half are AI games, senario, occasionally a few FFA, some black forest wood nothing game… almost no playable lobbies. If I open a lobby no one joins. Is this game dead?

So why is there no one playing? I feel that the player number has dropped quite a bit in recent months.

more likely timing, I always see 3v3 and 4v4 when I play in my evening timezone

Are you looking for 1v1? Cause better to go to ladder for those

just another random screenshot…almost every lobby is treaty…so where are the players?

i guess so but maybe I am bad luck always. yes i do play 1v1 ladder but sometimes i want some team games too

Cosidering 99% of AoE2 players love BF and 99% of SC players only play unlimited mineral maps, this is very nomal.

You should be happy that AoE3’s quick match has not been poluted by these crazy and ugly maps yet.

There aren’t much more team supremacy matches in unranked lobbies and to find a balanced 2v2 or 3v3 in ranked it takes at least 7/8 minutes to find otherwise 10 and most likely the match will be unbalanced. You should play with already established teams with friends. On steam db you can see how many players are leaving and the high end starts to go down. Between the end of 2020 and the beginning of 2021 much more balanced teams and more high-level players were easily found.

When you want to play standard, use the ranked search. It’s faster and better matches that way.

the remaining few normal setting games more than half are AI games, senario, occasionally a few FFA, some black forest wood nothing game…

I mean, dude, this is the whole purpose of casual lobby. This is exactly what one should expect to find there.

Well, except for every player between 2010-2020, where the lobbies were also used for competitive and balanced games.

Yep, it’s been two years yet many players are apparently still confused. Perhaps the interface/labeling needs to be improved somehow to make things clearer.

Or perhaps they should change it so lobbies allow ranked games (and proper military ranks to facilitate balanced games). Microsoft needs to accept that that is what players want. It is what they were used to for over a decade and it works better since you can chat before a game (a massive MASSIVE feature you frequently leave out when promoting quick search, as if it weren’t a beloved feature for many MANY players).

The game has a rapidly shrinking player base. At this point, whatever tiny anomalies/imperfections that may be found in rankings due to ranked lobby games is a trivial price to pay for a far greater experience.

The game has a rapidly shrinking player base

By what metric?
Last 12 months on Steamcharts don’t seem to support that at all: 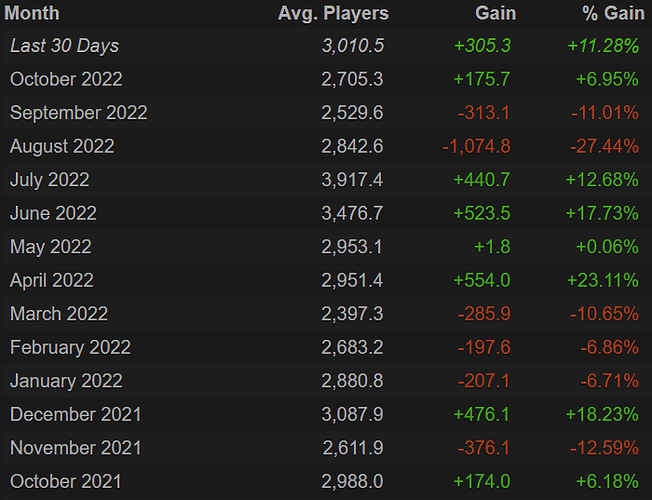 Yeah actually the game does not a a rapidly shrinking player base, numbers have been pretty steady for awhile.

Lol from 2020 and early 2021 is not lowered, too bad you do not know how many players are online in multiplayer otherwise you would see a sharp decline because on eso when there were 4000 players you found a game quickly now with 4000 players it takes at least 7 minutes to find a match so there are no 4000 players in multiplayer while on eso when it counted 4000 they were actually 4000.
If you noticed when the free game was launched it boomed after those days the population has remained the same before the boom

treaty lobby are ranked too if i am correct, so its can explain a bit of why you see many treaty lobby game

The decisions made for AOE3de thats why. They abandoned the entire ESO power rank system along with friends lists/lobbies. Still 100-350 online in TAD at any given time, 100% more fun. (i own de just dont play).

Also on a far lesser note the pathfinding/lag/mini map is worse in DE.

My bad, everybody. I suppose I just assumed that to be the case based on the recent treatment of the game combined with doomer posts.

Of course, the rest of my points still stand. I’ll instead say that whatever tiny anomalies/imperfections that may be found in rankings due to ranked lobby games is a trivial price to pay for a greater experience, considering the stagnating and overall low player base.

@Synchro6613 makes a good point on the numbers.