Where is the support?

I’ve to say that I think it’s really unacceptable that they sort of have forgotten about Age of empires 1 & Age of mythology games and their playerbase with things like not providing any sort of new content, expansions etc but also not even MENTIONING them in interviews lately.

The reason I belive is that when it comes to Age1 the DE didn’t do much to change the gameplay aspect just gave us a bit better graphics & awesome soundtrack.

But the issue is the GAMEPLAY even the DE version feels so outdated which is the main issue I believe that they aren’t making new content for it. This problem is causing that less and less people are interested in this game not because they don’t like ancient history and the timeline but because the game play is miles behind AoE2 and other titles in this franchise.

I still to this day think the best thing would had been to reboot the franchise with AoE4 and have ancient timeline instead of AoE2 and make it better this time because I can guarantee you that many more will start becoming more interested in that setting.

Same thing goes for AoM, give us at least a DE version but I personally want AoM2 with all the old civs (minus the Chinese) and then also introduce new civs too to make it fresh.

There are MANY players waiting for this to happen, please Microsoft don’t forget about us. We are here awaiting for good news…

I honestly feel like the outdated game-play of AoE is what is holding them back from creating new content for that game, and I really believe that making a brand new game with quality of life improvements & better game-play closer to AoE2’s or AoE4’s (time will tell) would benefit this a lot more than continuing to provide new content that doesn’t fix the core issues of that game.

Don’t get me wrong I’m sure that a lot of people like how AoE is played but comparing that to AoE2 is miles behind in terms of game-play, quality of life improvements etc.

I remember showing my friend the DE of AoE 1 and he told me that it looks nice graphically and the soundtrack is awesome but the game-play itself is lacking compared to AoE 2 and I think he’s right. I agree with him and AoE 1 has a special place in my heart, playing it since I was a little kid but it just isn’t the same anymore.

The time period of ancient time is awesome and I really think people love the history and the different empires of that time, we just need a better game to do that in.

Thanks for your answer, I believe we both want what’s best for those two games and let’s pray that Microsoft hear us.

that Microsoft hear us.

I agree that times are different now, but that doesn’t mean no one likes (or won’t like) Age of Empires 1. I don’t share the idea that certain types of video games should no longer be produced or maintained in current times. It may be a small number of people compared to the trend, but I think it’s great that time and affection are dedicated to small audiences by keeping support up and having updates/sharing news regarding the things of interest to them. I would love to play this game if/when I’m older (as well as other classic games and remakes)… probably many of us think the same.

I do not agree with change much to the first AoE, just because it is the ancient era and transform it into a clone of AoE2. I think the gameplay of 1 is special because it doesn’t have so much content and a different rhythm.
On the other hand, I would like a more complete game about the ancient age, but I think this should be similar to what they are doing with AoE4.
It’s a shame developers only look at the middle ages, when Ancient age is so much better.

It seems as if the sun has set on AoE I and the new era is gonna be AoE II forever. I’m pretty sure AoE V, VI, VII, VIII, IX, X… are just gonna be modernized versions of AoE II just like how AoE IV is.

I hope age IV tanks and then a better dev team will give us Age V set in ancient times with better ,realistic graphics/artstyle and building scaling.

More civs such as:

Peoples from the Indus valley.

Unique unit for each civ. Similar to AoE2.

Greek tech tree, could we please add the sword line for the Greeks, at least up to long sword?

Reduce their siege capabilities and enable the sword line please.

Civ bonus idea: Give the Greeks a unique tech called philosophers that allows you to age up 50% faster.

Thank you for this still amazing game

I am begging you developers to add new stuff to AoE 1 DE, the game that started the Centuries of Empires series. I would like to see new civs, campaigns and the most important game engine update (also with AoE 2 DE). I am counting on your response.

Do you want new stuff and updates for the AoE 1 DE?

The way things are supposed to be. 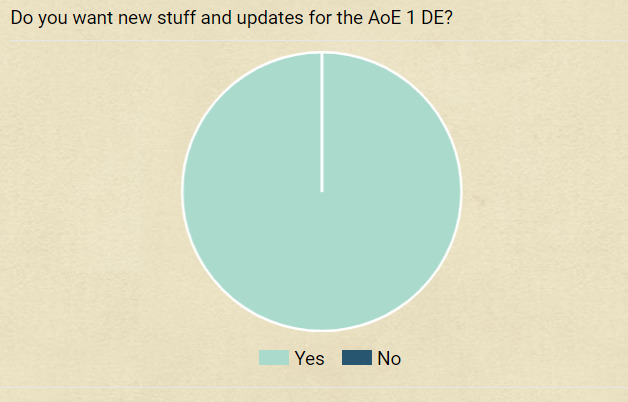 I think it’s important to mention here that this is not a hate against the current stuff, which certainly meant its best when time is available. It’s more about an extension of the stuff.

Mainly they need to add balance to the units like the other age games. Currently no units have bonuses against other units. Also they should add trade carts in some form to the markets like in aoe 2, because running out of gold is a big problem.

I think a new barbaric civs would be very useful. They could make the entertainment more attractive. Another thing should be to increase the difference between each civs - different unit models, more Unique Units - at least for each architecture style.

Adding unique units for civs would be a great idea

Maybe that could be done in an expansion.

The Barbaric DLC should be the priority. It could add completely new things (lots of new civs, lots of campaigns, new architecture) and even add new Ages (e.g. 5th Age - Marble Age). Such a DLC could be called - Age of Empires: Fall of Rome.

The developers killed this game - both Ensemble and Forgotten Empires.

If aoe2 was threated like aoe1, there would be no new civs after Conquerors and no Arbalest, Paladin, Siege Onager, Hussar, Halberdier upgrades.