Why are we actually playing it? Do you still enjoy the game?

I do not understand you…

a demolition ship should not be called an atomic ship.

Unfortunately, this game became a tower and castle war and a siege war.

I refuse to play. It’s fun and unplayable …

Nothing will help here. Even big repairs won’t help …

Only a complete reworking of the game will help here.

It is true that it needs some adjustments. I enjoy and continue to play. I’m sorry for you. You can always stop playing.

P.S. The game does not need a rework. The game is not designed to your liking.

Wish I could get a refund. Games dead and wont be fixed anytime soon

There are a lots of space for improvements, some bug, some units seems op, and too many sieges… but I still love the game and I didn’t stop to play since release

I know I want to play too, but it just doesn’t work under these conditions as it looks in the game.

After a while, you will also stop having fun when siege weapons come at you in every game …

I think the game is not designed for the AoE 4 community but for the Siege Wars community.

And the developers know this well.

One piece of advice for developers: I would remove all siege weapons except the treburchet and cannons that would only be used for construction.
And I would remove the nuclear demolition ship.

I think cavalry and melee infantry should be able to cut down siege with their swords instead of torching them.

Two reasons for this:

OR siege hp should be reduced drastically. A clocktower bombard with 864 hp is practically unkillable with torch damage.

The other thing is that siege packs and unpacks too fast. Packing should be slow so that if your weapon is caught it can’t run away so fast.

All in all, unprotected siege units should be very fragile and very easy to take out. You need to be able to protect your siege equipment with your other units.

I think people need to start looking beyond the game and inside themselves trying to fill a void with something they either never enjoyed (but continue to post on the forums) or no longer enjoy.

This is starting to exemplify the definition of insanity rather than any reflection on the game. Doing the same thing over and over again expecting a different outcome. The road map still continues next year… It might be too late and has already spoiled the potential but the game is not a failure to everyone (arguably most people when you look at the steam reviews). There will be other games if it does not get fixed to your satisfaction, and life goes on…

Please stop with these funeral posts, negativity can become a serious illness.

Finally I wholeheartedly disagree, the gameplay is excellent and extremely enjoyable. It does need further features and fixes, which I agree would be better to come sooner rather than later. Be critical but constructive and do not throw the toys out of the pram.

Almost 9 out of 10 people went out of their way to leave a positive Steam review, when as evident by this forum, people are much more willing to be vocally negative about something. Anyone not leaving a review like myself are probably too busy enjoying the game.

By no means is the game perfect but everything cannot be enjoyed by everyone.

Sure let’s have a conversation about things that need changing and/or what people don’t like but phrasing it like doomsday is upon us and we will all never be happy again, we might as well all logout and never come back to the forum.

It has won awards over other incredible games including Microsoft flight simulator and is the most successful game of its genre in years.

There is a distinct difference between a game being a failure and “Im not very good at it so don’t find it enjoyable, please start again revolving around my personal preferences.”

I play skirmish matches against AI. It is still fun for me. Kudos to games for this game

Deat confused reader, math is here to rescue you!

I do not understand you…

you’ll end up in reality.

you’ll end up in reality.

All u need to promote game with previous franchise for 2 years.
Be the only one RTS game in last 5 years.
Be the most popular game in 2000.
Buy installation on wall street.

and recieve x6 drop of players after two months.

Yes, common sence is not on good terms with math.

I’ve left a positive Steam review. At the same time, I think the game is an absolute disaster. I’d rate it at 6/10 max, which is still positive (I’d have to rate it 4/10 or lower for it to be negative), but ridiculously far down on where it should have been. I’d rate AoE 2 DE at 8/10, so AoE 4 should have been at least a 9/10 game, having so much more experience and technology available at the start of its development compared to AoE 2.

In part you are right, but that does not mean that several of those who give positive reviews are casuals who enjoy the game for a while (campaigns and a few games) and then play other games and leave it aside. The survival of the game for years to come is very important and it is very important that they take action faster so that it is not too late.

My friends and I still play it as a fun group activity. We don’t often play alone, off VC, because it isn’t as fun to play QM with just anyone on your team. I don’t mind 1 vs 1 QM either, even if it’s drier than the other games in the series.

An oft-quoted bon mot (frequently attributed to Albert Einstein, Benjamin Franklin, or a number of other people who probably never said it) is that insanity may be defined as “doing the same thing over and over and expecting different results.” While the job of lexicographers might be easier if they were allowed to use witty sayings instead of precise definitions, such belletristic labors are not within their purview. The straight facts about insanity are these: it has been in use in English since the late 16th century, for the first two hundred years or so carrying only the literal meaning “the condition of being mentally deranged.” In the 19th century it began to take on a looser sense, “extreme folly or unreasonableness.” In modern usage, insanity may be found in both senses: you may tell your brother that trying to skateboard while holding onto a car is “insanity” (in which case you mean that it is extremely foolish) or encounter the stricter original meaning in such contexts as insanity plea.

The core of the game, the gameplay is good. But too many things are missing. I don’t know if they lacked time or budget but AOE4 feels rushed. The amount of bugs doesn’t lie. Also features like scenario editor coming in 2022 are a solid indicator (i bet it’s very buggy right now).

I always had that feeling since the beginning. They wouldn’t tell or show us anything and beta came very late which was weird. People said they were just keeping the big surprise but no, we’ve seen the truth during the first betas.

Why are the game mechanics so obscure? Why doesn’t the tech tree show unit stats? Why can’t we see the map after the game? It may seem like nitpicking but you add up all these little things and you realize the game is incomplete compared to the other AOEs.

Also the campaigns are very disappointing. They felt bland, boring. The educational videos were cool but they didn’t make the campaign engaging. Why not give us a story? Like in AOE2 and 3? AOE4 campaigns are like reading snippets of a wikipedia page with a very linear mission to illustrate the events. Where did all the creativity we’ve seen before go?

I hope they give us good a DLC if the player base isn’t gone by the time they release something new.

this is true but the way you are aproching to devs is bad .

why are you from the Middle Ages where battles were decided by armies (infantry, archers and cavalry) now battles are decided by Siege weapons. It is no longer AoE 4 - the game should be renamed Siege Wars.

Water and boats … I won’t even talk about it as if it didn’t exist for me. That’s the worst thing in the whole game. Islands map - few places.
As I have a water map, I leave the game right away.

damm , in closed beta everyone loved naval. And a lot of players still do.

a demolition ship should not be called an atomic ship

sheeesh , this is true hahahah.

Where are some battles in times of darkness and feudal times. Everyone rushes only to 3 times to make Siege tanks

ummm , i do find this well made. because in other aoe games , people never defend parts of the map , so i think this is good , map control is nesesary for winning lmao.

But now seriously , this is not the way of approching devs.

Only a complete reworking of the game will help here

Its just not the way. Obviously they wont rework age of empires 4 .

I will continue playing , Playing with the AI bring me a lot of fun! and campaings are really cool! Sorry for you , you can always come back though

The campaigns are okay. But they aren’t very memorable. Most missions are just the same thing over and over again.

Not very unique kind of missions. Which is because they went for historically accurate over engaging missions. The lack of characters makes you much less likely to fall in love with the campaigns. Heck I did them pretty fast and got my achievements and now I don’t even remember any of them.

Still remember all my AoE3 and AoE2 campaign missions though. They were memorable.

The campaigns are okay. But they aren’t very memorable. Most missions are just the same thing over and over again.

not really , every mission haves its unique scenario and way to play , its just they way to think and the way to play that makes them memorable . I

in the norman campaings you went for like 4 families with different people in each mission , i think in only 2 missions you dont play with a hero unit.

Still remember all my AoE3 and AoE2 campaign missions though. They were memorable.

Not for me , maybe the aoe2 campaings , but heck Aoe3 campaings were BORING and aoe3 was my favorite aoe game ever , and my friends didnt like them neither , i think only one of my friends finished just because he bought the game , not because he liked them.

Aoe4 campaings are for me the most memorable of them all , Relic made a good job on them and its obvious they put more than half of development time and their money into them . 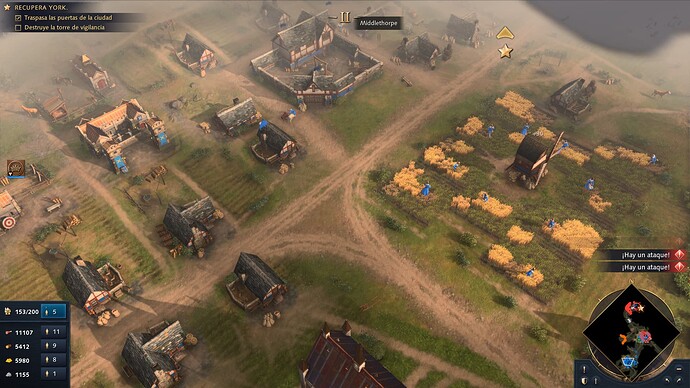