Why did you stop playing AOE4 or why do you play it less?

Inspired from a similar AOE3 forum post I would like to ask people who stopped playing AOE4 or play less than before but are still on the forums why they did so and what will make them come back to play AOE4 / play it more.

For the active players: Please be kindly to criticism.

I hope the answers can help to avoid a further lost of players and maybe even help to attract new players or bring old ones back. Provided the developers listen to the answers.

I play less but not stop because there are many other titles out there like Song of conquest, dune spice wars, trek to yomi, line of War and some other title that I don’t remember now, that are absorbin all my time. A couple of time at week a play some random quick match 3vs3 or 4vs4 just for have fun

I tried to play It again after the latest updates and mods but i found the game too ripetitive and simply. I don’t see the same realism and immersion of AOE3 and AOM. 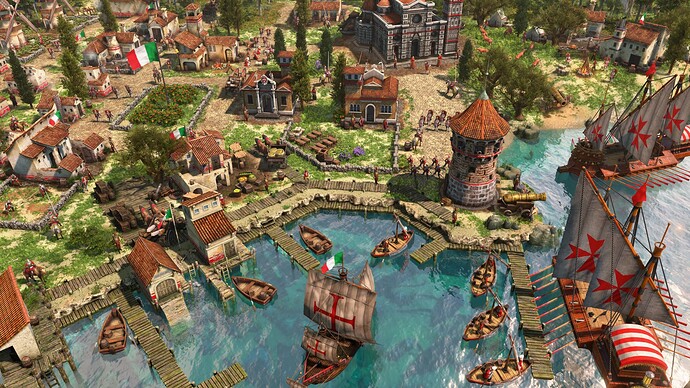 And i’m waiting for AOMDE or AOM2.

For me AOE4 has been a big disappointment.

I Hope AOE5 will be Better.

I completely stopped playing 3vs3 & 4vs4 since December, even though this is what i love to play.

This because of the bug exploits like: relic and ovoo multiplier, spearman damage going across the map, and patches took up to a month on thise game BREAKING exploits.

Drop hacking was the last drop. (No pun. Hehe)

Still a huge fan and playing every day for at least 3 hours, now in 2vs2, and ranked. Going to 500 games soon.

If i ever need to stop playing 2vs2, or even everything, drop hacks will be the cause.

has it been officially announced?

after ranked came out, i lost the enthusiasm, although ranked games have much more accurate matchmaking compared to quickmatch 1v1. but still idk, why, but i lost interest after playing a few ranked games. I will probably get back into it when idk

After they changed map sizes, I stopped / play rarely team games… The smaller size could be ok, but spawns are bad and inconsistent.

I stopped playing ranked, since I reached gold I, because why would I play more and risk to loose that

I’m not top5% of player base yet, to achieve next reward. But I play quick match 1v1, and tbh, I still don’t really get what’s the difference, apart from the shiny statue.

No ranked team games. My #1 issue with this game

I stopped playing the game for a simple reason

The game feels like a medieval RTS to me and not Age of Empires.

You will loos it if you don’t play. Several reddit post have been made about this and it seems you loos 15 points after 2 weeks of inactivity in ranked.
(Sorry to kill the fun)

WHO CARES. Ranked rewards are pointless due to mass drop hacker and cheaters they Epic wont ever ban.
I see a high ranked I think “cheater” not a good player.
Ranked is just a grind like every ladder. get your fake trinket and move on.

Stuck in Keybinding limbo. Hate universal grid with a passion. Uncomfortable. Baffled why an RTS game in 2020+ from a AAA wouldn’t have fully configurable bindings off the bat. Supposedly in the que to be fixed come season two. Just doesn’t change the reality of today. Can science and bug hunt. Not much more without building muscle memory.

I am not sure about this if it just a rumor, or something that has been implemented very intransparent, inconsistently (buggy)… Wouldn’t be a first

I played on 20th of April my last ranked game, since then I did not seem to loose any points, neither in-game (ranked tab), nor on the aoe4world page.

On the other hand, if that would be the rule, and it is communicated transparently, I have no problem with it, but it’s not mentioned anywhere in the official announcements, videos, as far as I could see, or is it? Maybe just another bug people face occasionally?

Or they implemented it for the higher tiers maybe?
Another game was named who had implemented this for a certain league and above.

Not enough custom settings in custom team games, no diplomacy mode, no 500 pop cap like AoE2, no colour picker, lack of water map variety, no blood option, basic features i expect in the newest AoE game. Also slow on updates and only focusing on ranked play with constant back and forth balance changes. I still play but less and less until more content is released.

For me it’s basically this. And I have to add that for me the game feels like the devs or Microsoft (I don’t care who) made AoE 4 with alomst only eSports and hard core multiplayer in mind, even though the vast majority of players never or barely engages with it.

Sometimes I do want to be fully concentrated and have highly competitive matches but other times I just want to have a relaxing time against the AI. For me the game fails in both regards.
Firstly because of the slow rate of updates and the back and forth changes you mentioned, but also because to me the game always looks like it’s mainly about finding the most broken system to abuse. Maybe that’s just the meta evolving but I don’t care, it’s not fun and that’s why I play games (crazy, I know).
And secondly because AoE 4’s single player contend is abbysmal. The campaigns have no replay value for me and I didn’t like them that much anyway (that’s subjective, though) and costum games don’t offer nearly enough fun long term. Mainly because of the underdeveloped AI and the lack of options, that were present back in the 90s. It feels like single player against the AI was designed to only be a testing ground for multiplayer (again, that’s not what the vast majority of players want to use it for).

I’ve moved back to AoE 2 because that game can offer me both. An endless amount of single player contend, that can be adjusted to my needs and mood, and highly competitive and fair multiplayer.

1- Not having fully customizable hotkeys;
2- Small details that remind me of an unfinished game, like the weird golden border at the edge of the map, inanimate animals in the TC, the way buildings disappear after being destroyed, etc;
3- The main one: low diversity in the environment. Although we have biomes (which is an excellent idea), the impression I have is that I’m always playing in the same place, it doesn’t have a new freshness, even the “mega-random” doesn’t bring interesting arrangements to play, it always looks the same, I feel like it’s just an “asymmetrical open map” that eventually puts you close to water or not, but nothing really random, so much so that my build order is basically unchanged, adapting to water opening or not. When I played mega-random in AoE2, I really felt the randomness, the arrangement of the forests formed unusual sets that implied completely different game modes, closed maps, open maps, islands, concentration of gold or relics in the center of the map, with different initial buildings, in addition to the number of villagers and soldiers. When I play AoE3, it has such a rich variety, not only in the animals, but in the contrast of the environment, vegetation, etc. and that greatly enriches my immersion in the game.

Despite that, I love the game and I intend to return to my usual frequency with it next season when I have the improvement in the hotkeys.

The game is fun. Love the diversity of different civ, and different civ can choose different strategies by different landmarks. The updates are slow but the recent patch been great and quite onpoint. But there are some bad mechanics that can still ruin the dynamics of the game.

Even though I think AOE4 has the potential to be the best RTS in the market, its just a shame that some of these stuff haven’t been fixed/improved.