Why is cruel animal abuse in AoE2 DE fine, but harsh language is not?

I can’t call someone a r3t/\rd in game without being censored for the correct spelling when it’s been 47 minutes and they haven’t made a single military unit as flank, but it’s totally OK to have an innocent camel unit loaded with burning hay, to the point where you can literally hear the camel screaming in agony from the fire on its back until it dies from a suicide explosion?

Does this make any sense? 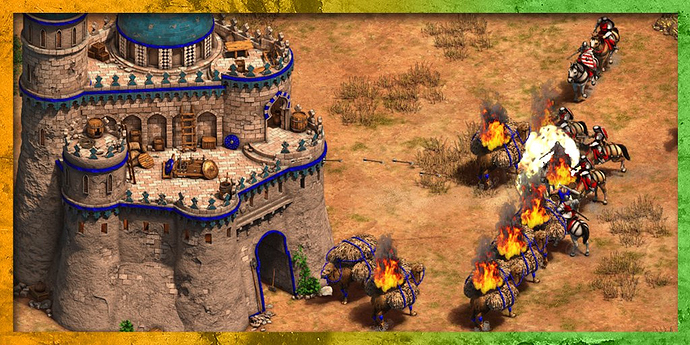 Apparently harsh language, according to the devs…

Game is about War, so get used to it.
Still no excuse for bad manners.

You forget the game makes people kill and eat animals that are taboo for some cultures.

Bad language is still not ok.

Are you for real? IDK… Maybe because it actually happened?

And no one ever swore during a war???

Still no excuse for bad manners.

I didn’t realise that only people with good manners went to war with each other.

So we’re putting some lines of code and some pixels on a screen at the same level of interactions between 2 real humans now?

I’m still being exposed to scenes of unprecedented violence against camels. Do I ban tatars every game?

However, I can still mute anyone flaming in chat, but I can’t stop witnessing flaming camels being murdered over and over again.

it’s a video game and cursing is bad, kids play this game too

it’s a video game and cursing is bad, kids play this game too

So it’s not OK to expose kids to language such as “baboon” or “retard”, but it’s perfectly acceptable to expose them to horrific images of violence done to camels?

So you wouldn’t mind kids reading comics with ultraviolence in them, because theyre’ just comics???

How many games do you see with camels in them? If one of the few games which has realistic representations of camels in it portrays them as suicide bombers, then what kind of message is that sending to kids about camels?

cyberbullying] ! Must have missed out on this big ordeal of parents complaining to videogame company’s about this stuff to the point where companies have to censor it all. It would be good to allow a option to turn on or off in the game options or platform though

I think you are taking this thing way too seriously

As others pointed out. One is the coding of a game and directed at no one…

The other is a personal attack on a living breathing human.

As much as you might want to rationalise YOUR logic it doesn’t change the fact that one is part of the game the other is an attack on an individual.

It’s the sound of all camel units when you move them.

The other is a personal attack on a living breathing human.

When did I say I was using personal attacks? I am talking about the use of harsh language being censored in any capacity, not making verbal attacks directed at specific people.

Personal attacks can be made without the use of harsh language, which are obviously not censored but could be worse…

So it’s not OK to expose kids to language such as “baboon” or “retard”, but it’s perfectly acceptable to expose them to horrific images of violence done to camels?

Yes, War is part of life.
Insults are just a breaking down of social order, however, and need be discouraged.

I am against censoring anything, really, but I can easily see why there is no double-standard here.