Why is hakkapelit so broken

Hakka has melee multiplier vs all cav, not just heavy cav. 30 hand attack. This unit is hussar + dragoon + halberdier 3 in 1.

But they are light cavalary and get countered by skirms AND musketeers.

They are hard counter to skirm. They have huge hand attack and super high hp for a light cav. They eat skirms

On range they get countered hard and melee theyre still >2x worse against skirms than hussars (same meele attack damage as hussars, but 25% less HP and skirms deal 2x more dmg vs hakkapelits than hussars melee).

Overall Hakkapelits get countered by basically any infantry unit (except skirms in melee, which can still be tough as you usually do not have 1v1 situations of your units in larger fights and backline skirms can just shoot the hakkapelits dead). 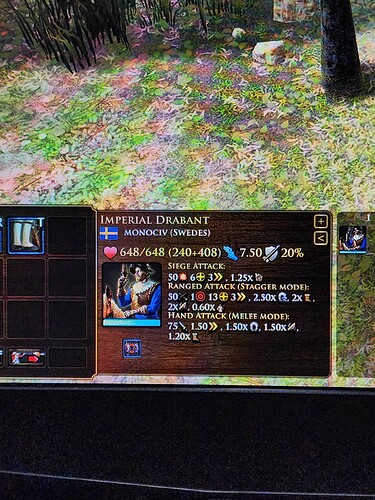 Fully upgraded, compare to port dragoon which used to be the best, hakkapelit is about 10% more expensive, but
40% more hp,
3x the siege damage
A bit higher ranged damage due to the area effect
moves faster
also not shown on this photo is more than 3x the hand damage which also has 1.5x multi vs dragoons and heavy cavs (they counter dragoons in melee)

well that range disadvantage is pretty significant, also they weren’t nerfed due to never being used high up
i won’t pretend its not a tad too strong, but shouldn’t unique unit be worth making, i don’t want aoe4 logic in my go to

And more fast! 7.50, is incredible versatile.

also you have to consider outside of treaty, its not often to get all the needed shipments and upgrades in

i think some nerf should happen, but please, not the aoe4 kind, that game basically punishes you if for using unique units

Tbh I don’t really think it even needs a rework if carolean is still the musketeer-dragoon. It could still be the same heavy cavalry like the oromo. It could have some better stats than before, and it is already very unique.

They should lower the speed and ranged resistance and increase their cost a little. Maybe a slight reduction to hand attack as well. I think that would be enough to put them in their place.

I never play treaty but in supremacy there are tons of hakka spammer already these days.

The problem is that there is no counter. Musk is a soft counter, not a hard one. And musk tends to bunch up and suffer from area damage.

Skirms can pick off a few before they get completely surrounded and melted.

All cavs are countered by hakka, including most of the light cavs. Hakka has high hp and trade well vs all light ranged cavs. Once they get in melee hakka melts all light cavs.

Hakkas are also incredible at raiding, just switch to melee. Normal dragoons can’t do that, they dont have enough hand attack.

Some of that seems like an oversight. They should only be getting Caracole from the Arsenal.

Yea the fact they have “hand cav” and “light ranged cav” unit class, allowing them to get upgrades and cards for both.

However the lack of “heavy cav” tag, allowing them to survive against dragoons.

The speed will almost always be the same, don’t think anyone is wasting a card for +0.25 speed on 1 unit either in treaty or supremacy.

Otherwise the hakka is a bit more expensive and in return you get more HP and a strong hand attack. I’d take the port dragoon over the hakka though because range is so important and +5 range is very significant.

Also I’m not sure how many cards you’ve used for each unit, wouldn’t be fair to compare them if 1 had 4 upgrade cards and the other has 2 because you’re investing a lot more in that 1 unit.

The designer just forgot to remove its melee cavalry target, so it benefits from both ranged and melee cavalry upgrades. Their melee attack is a bit too high either, and does 100% to villagers.

They also forget to change Ethiopia Oromo warrior shipments: it should have 4 in fortress, 7-8 in industrial, and 1000 influence 6 arquebusier should buff all ranged cavalry instead of heavy ranged cavalry (Oromo are no longer of this type).